Elected last November, the 116th Congress will have a record number of women members – many of them mothers. In new research, Lisa A. Bryant and Julia Marin Hellwege examine the relationship between being a mother and introducing legislation on child and family issues in Congress. They find that mothers write on average, five more bills over their time in Congress compared to women who are not mothers, with working mothers with children under 18 likely to be even more productive.

Research on women in legislative positions has shown that they are more likely than men to engage in so-called “women’s issues.” This term has been used include a variety of policy issues including wage inequality, healthcare access, reproductive rights, educational priorities, and family issues such as parental rights and family leave. In new research, we take this broad concept to task by questioning why all of these issues, particularly children and family issues would be on the legislative agenda for all women. The notion that women should have a particular interest in children and families rests on a stereotypical expectation of women as caretakers and mothers, current or future. We argue that motherhood is an important identity and that women with children, particularly young children, should be more likely to introduce legislation regarding children and family issues than those women who do not have children or women whose children are already grown.

Our work shows that working moms with children younger than 18 may have a different legislative agenda than other women in Congress. Our findings are timely, given the influx of women in the so-called Pink Wave of the 2018 mid-term election. Not only did this year’s freshmen class add significant diversity along common demographic lines, such as race and ethnicity, but there was a meaningful increase in the number of mothers elected as well, doubling of the number of working moms in Congress.

Our study examined how moms in Congress compared to women without children by examining the number of bills they introduced as primary sponsor regarding children and family issues. Using statistical analysis and accounting for several factors such as seniority, ideology, and productivity, we found that overall, moms are more likely to introduce legislation in this area than women without children, and working moms introduce more than women with adult children.

Our data includes 196 unique female members of Congress who served between 1973 and 2013. Using a two-step process, we first selected data from five broad search terms based on categories predefined by the Library of Congress for Congress.gov: Education, Crime and Law Enforcement, Families, Labor and Employment, and Health. We then selected on narrow search terms specifically related to children and families to capture the full spectrum of policies that could directly impact children and families.

To collect information on whether or not members were parents and the account for the ages of their children, we used the Official Congressional Directories provided by the Government Publishing Office as well as news articles found through news databases. Overall, we found that the majority of mothers in the House had children over 18 years of age when they were elected to office, and that number has been increasing. Up until 2018, the number of women in the House without children or minor children had remained fairly steady. This led us to create three different groups of women in our analysis: women with no children, women with minor children, and women with adult children. 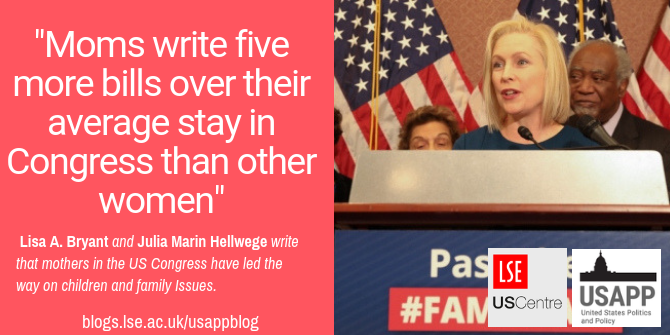 How could more working moms change the House?

On average, women in Congress over the time period examined wrote about 25 bills total in each session of Congress. Using statistical analysis, we examined differences in the number of bills moms wrote specifically about children and families, compared to women who do not have children.

Moms write and introduce more bills related to Children and Family issues than women who do not have children and that can add up over time. In each session of Congress, we found that women who do not have children write nearly 7 bills each session compared to moms who wrote more than 8 bills each session. Given that the average woman member of Congress was re-elected for 5 sessions, it means that moms write five more bills over their average stay in Congress than other women.

While this difference may seem small, they become more pronounced when we look at the age of legislators’ children. In what we call the ‘recency effect’, we find that women with young children, under the age of 18, who may currently be dealing with issues such as children’s health insurance or childcare, sponsor more Children and Family legislation than moms with adult children or women who do not have children. Working moms with younger children sponsor over 9 bills each session, compared to “empty nesters” who write about 8 bills and women without children who write about 7 bills each session.

Moms in Congress have sponsored and passed significant legislation over the past several decades. Pat Schroeder, who represented Colorado from 1973-1997 and co-founded the Congressional Women’s Caucus, fought for nine years to get the Family and Medical Leave Act of 1993 passed, and it is considered one of her greatest legislative successes. In 2014, Jaime Herrera Beutler (R-WA) sponsored legislation allowing children on Medicaid facing complex medical procedures to receive treatment out-of-state if needed following the birth of her daughter who required out-of-state treatment for a rare condition.

In the 116th Congress, we may expect member moms to continue championing bills affecting children and families, such as paid family leave, which was recently re-introduced by Senator Kirsten Gillibrand (D-NY) and Representative Rosa DeLauro (D-CT). We may also expect to see mothers in Congress introduce and advocate for a number of education bills, from increased access to early childhood education, after-school care and full-day kindergarten, to more affordable solutions for higher education. Other issues that mothers may advance include increased access to breastfeeding for working mothers, tax credits for eldercare, and affordable housing for families.

While we controlled for ideology in our study (using DW nominate scores) and found no differences in the rate at which conservative and liberal mothers sponsor child and family legislation, it is important to note that the majority of mothers in Congress are Democrats and beyond the policies listed here, they are also likely to be some of the biggest supporters of more partisan legislation aimed at reducing gun violence and gun deaths (an issue which compelled new member Lucy McBath (D-GA) to seek office and campaign on after her son was shot and killed), ending family separations at the border, and the expansion of LGBTQ+ rights, including protections for same sex parental rights and adoptions, an area of family policy that has been making its way through the states.

Lisa A. Bryant – California State University, Fresno
Lisa A. Bryant is an Assistant Professor of Political Science at California State University, Fresno. Her research and teaching focus on American political behavior, campaigns and elections, election administration, and public policy. Her work has been published in outlets such as American Politics Research, Electoral Studies, and Political Behavior.

Julia Marin Hellwege – University of South Dakota
Julia Marin Hellwege is an Assistant Professor of Political Science at the University of South Dakota. Her research and teaching focuses on American institutional behavior and representation in relation to gender, race, and ethnicity. Her work has been published in outlets such as American Politics Research, Social Science Quarterly, Politics, Groups and Identity.