In large states with relatively low populations, like Nebraska, getting people who do not have access to a car from A to B can be very challenging. Morgan D. Vogel and Robert Blair look at the role of mobility management programs in connecting people with different transport needs across large distances. They write that public-private partnerships can be an important part of these programs, as can collaboration between transit agencies across state counties.

Throughout the United States, there is increasing pressure for communities, especially in states like Nebraska, to develop and maintain sustainable transportation infrastructure initiatives in order secure economic and social prosperity for the future. Many of these transportation initiatives include mobility management – a strategic, efficient approach to transportation service coordination and transit options in order to make transport better for members of the public.

The state of Nebraska has a population of less than two million people with the vast majority of the population concentrated in the major metropolitan areas in the eastern part of the state, while population is widely dispersed among communities in the western part of the state. Currently, there are 58 rural public transportation providers coordinating public transit in 84 of Nebraska’s 93 counties. Public transit is provided by demand response in all but three cities where there are no fixed or regular routes.

Much of the need for public transportation results from the lack of a vehicle in households. According to the US Census Bureau’s American Community Survey, 5.7 percent of all Nebraskan households and 9.9 percent of households with a householder aged 65 or older lacked a vehicle in the 2012-2016 period. Additionally, the American Community Survey reports that 8.8 percent of the state’s unemployed did not have access to a vehicle. By providing access to services and employment opportunities for these and other marginalized populations, mobility management initiatives strengthen the social equity and community capital of nonmetropolitan communities, improving the likelihood of economic viability and long-term sustainability for the region.

In order to address public transit service gaps throughout Nebraska, the Nebraska Department of Transportation (DOT) formed a partnership called Advance with the Nebraska Safety Center (NSC) at the University of Nebraska at Kearney and the Center for Public Affairs Research (CPAR) at the University of Nebraska at Omaha. This partnership allows the Nebraska DOT to bring in experts in content areas, add resources, learn about best practices, and benefit from the latest technology. The Nebraska DOT also integrated private organizations, along with its University partners, to create a public-private partnership that enhances travel options across the state through the Statewide Mobility Management Project.

The goal of this project is to establish statewide mobility management strategies to address mobility needs and identify service gaps. In order to create more manageable transit plans (and ensure local control), the Mobility Management Project identified six mobility management areas with each region, creating comprehensive transit plans to coordinate services and identify strategies to expand public transit options for residents in the area. The plans vary from region to region, reflecting the geography of the area and addressing mobility needs and gaps in light of the existing public transit services. The regional strategies will discover ways to improve transit efficiency, leverage existing services, identify service expansion opportunities, increase ridership, and address other transit issues in the region. 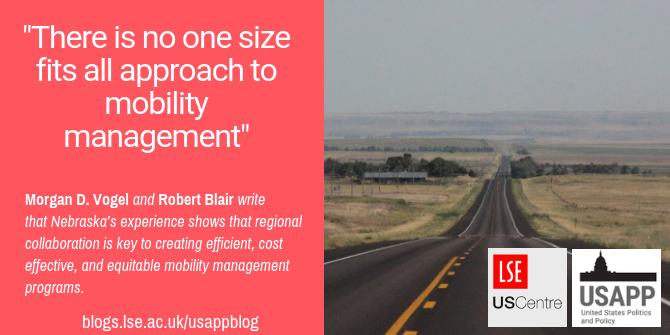 “Nebraska” by jacdupree is licensed under CC BY NC SA 2.0

Working with NDOT and Advance staff, coordinating committees in each region will develop area-specific transit plans. The coordinating committees are composed of public, nonprofit and private transit service providers, social service agencies, local governments, and other public transportation stakeholders. A mobility manager for the state will coordinate transit services and implement strategies included in each region’s plans.

An understanding of the movement of people from place to place forms the foundation for regional transit plans and strategies. Trips meet a multitude of transportation objectives, especially in nonmetropolitan areas, including: transporting workers to places of employment, transporting people to medical facilities for appointments, transporting shoppers to retail establishments, and connecting consumers to a range of personal services.

The importance of regional collaboration

In particular, many trip destinations often cross county and other governmental boundaries. This is significant since most transit agencies operate only within one county. Therefore, in order to transport people across county lines, there must be some form of collaboration among the various governmental units. According to Nebraska Public Transit, here are three examples of how this regional collaboration has occurred in Nebraska.

Research reported in this publication is part of a Statewide Transit Initiative conducted by the University of Nebraska on behalf of the Nebraska Department of Transportation [Project RPT-C990(017)] supported in part by the Federal Transit Administration [PTE Federal Award PL1601 Subaward 17-002-01]. Any opinions, findings, and conclusions or recommendations expressed in this publication are those of the author(s) and do not necessarily represent the official view of the Federal Transit Administration.

Robert Blair – University of Nebraska at Omaha
Robert Blair is a Professor of Public Administration and Urban Studies in the School of Public Administration at the University of Nebraska at Omaha. Professor Blair works closely with Nebraska city managers and administrators, and the International City County Management Association on educational, applied research, and professional development issues, and has provided technical assistance to many communities and public agencies over the years.