The US Congress has recently ordered a review of the country’s special operations forces – something that the UK Parliament is unable to do. As special forces are increasingly used in actions overseas, and face growing questions about accountability and resources, Liam Walpole argues it is time for the UK government to abandon its outdated attitude and allow for the democratic oversight of special forces in Parliament.

As part of the US National Defense Authorization Act for 2019, Congress ordered the US Department of Defense (DOD) to undertake a review into US Special Operations Forces (US SOF). The DOD published its preliminary report earlier this month, which received a mixed reception. But this article is not primarily interested in the contents of that review, per se. Instead, it is interested in asking why the US Congress understands the national security imperative of democratic oversight of special forces but the UK Parliament does not?

Much of the headline coverage that has surrounded the review focused on the ethics and professionalism of US SOF. This follows a string of high-profile news stories about allegations of misconduct by special forces operatives, which range from claims that some attempted to smuggle cocaine back from operations in Colombia to Navy SEALs being accused of murder while serving on operations in Iraq and Mali. The focus on ethics has led some commentators to speculate that this review is being used as a front to ‘rein in’ Special Operations Command (SOCOM) over worries that their expansion since 9/11 has not been followed with adequate oversight.

For example, we know special operations forces played a crucial role in the US’s counter-terrorism wars in Iraq and Afghanistan after September 2001 – between 2001 and 2011 their numbers grew from 45,655 to 58,657. However, the drawdown in conventional forces in these two countries over the last decade has further increased their utility. President Barack Obama was elected on a ticket in 2008 that pledged to reduce the US’s role in foreign wars, but it soon became apparent that US SOF were his ‘tool of choice’. This reflected Obama’s personal preference as much as the political environment at the time: tighter financial constraints following the 2008 financial crash; low-risk appetites for large ‘boots on the ground’ deployments; and dwindling support among domestic audiences for interventionism. A mix of all these factors led policy-makers to opt for a military approach that increasingly saw the US working by, with and through partner forces who predominantly do the bulk of the frontline fighting – what we at the Remote Warfare Programme call remote warfare.

US SOF play a central role in this new approach. This is because they’re perceived as more discreet than conventional forces, less costly and more specialist, positioning them as an alternative to conventional forces when engaging abroad on a light footprint. As General Raymond Thomas, the current head of SOCOM has described: ‘Rather than a mere “break-glass-in-case-of-war” force, we are now proactively engaged across the “battle space”’. Such forces were deployed to almost ‘all the countries on the planet’ in 2018. They’re now estimated to be 70,000 strong, although it is important to note that this includes reserves and DOD civilians working at its headquarters. 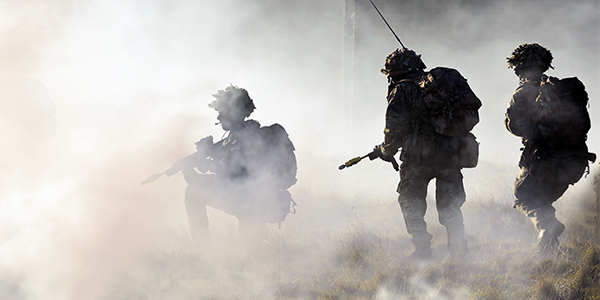 It’s on this basis that the review will consider the operational load of US SOF and their strategic focus. US lawmakers have expressed concerns that US SOF have potentially stepped beyond their mandate for training and equipping partner forces. Niger is perhaps the most obvious example. After a raid went badly wrong in October 2017, four US army special operations soldiers were killed, and several civilians lost their lives. This led several senior members of Congress to call for more information on special operations to be released to Congress. This incident is why the review aimed to assess SOF’s ‘institutional…and operational capabilities to counter anticipated future threats across [a] spectrum of conflict’.

This form of debate is unheard of in the UK. For instance, two UK special forces (UKSF) soldiers were reportedly injured in Syria in January 2019 and Sgt Matt Tonroe, an SAS soldier, was tragically killed in Syria in March 2018. Neither cases have been followed by a review, and, in fact, the MOD refused outright to provide any additional information on the circumstances of either case. This has prevented any democratic scrutiny by the UK Parliament over the government’s use of special forces as part of a campaign that ruled out British ‘boots on the ground’.

This reflects Britain’s culture of ‘no comment’ on UKSF activity – a tradition that prohibits any form of discussion about UK special forces. But it is also linked to the fact that there are no comparable oversight mechanisms to the US in the UK Parliament, which means even if major incidents did occur, no parliamentary committee has the required mandate to oversee UKSF-related issues.

This raises serious questions, such as: how can British MPs query the actions of the executive if a blanket policy exists that prevents any discussion? How can important lessons be learnt about past operations? And how can the British legislature effectively hold the government to account over the role, tempo and resourcing of UKSF, as part of the UK’s broader defence and security policy?

Some may ask why these questions matter – the government, for example, continues to argue that the no-comment policy helps UKSF keep the UK safe. The answer? Because UKSF are increasingly being deployed in lieu of conventional forces as the weapon of choice. As Jonathan Schroden has argued recently, the approach of working ‘by, with and through’ partner countries’ forces to engage militarily overseas is likely to continue well into the next decade, as Western states, he suggests, continue to apply military solutions to political problems, with special forces front and centre of operations that focus on building partner capacity.

The other reality is that UKSF are a finite resource and only form a small part of the UK’s armed forces. We know, for example, that there is evidence UKSF, like their American counterparts, are experiencing overstretch.

Reports in the media in October 2017 claimed both the SAS and Special Boat Service (SBS) have been understaffed by at least 100 troops ‘for years’, despite the extra £2bn that was pledged as part of the 2015 Strategic Defence and Security Review (SDSR). A report in February, 2019, suggested that UKSF are undergoing a ‘recruitment crisis’, demonstrating the implications this scrutiny gap has for Parliament’s capacity for holding the government accountable over its spending commitments.

Madeleine Moon, Labour MP for Bridgend and a long-standing member of the House of Commons Defence Committee, raised concerns about the limited accountability over the £2bn pledged by the government in 2015 at the time, and commented for this piece why she feels greater oversight is needed:

When large commitments like that made in the 2015 SDSR are pledged by governments, Parliament should be able to ask questions about how this sits with our broader strategic priorities for defence. It is my view that it should not be left to the media to perform that function.

As the Oxford Research Group has highlighted as part of its research on policy options for introducing external oversight of Britain’s Special Forces, it is perfectly reasonable for a parliamentary committee to take on this job as the Intelligence and Security Committee has done for over two decades for Britain’s intelligence agencies. In my view it is time for members of Parliament – even members of the Intelligence and Security Committee – to take the lead in demanding this change.

Like with so many other aspects of the UK’s defence and security policy, information surrounding UKSF is unhelpfully opaque. If we can learn anything from the fact that Congress has even requested a review, it’s that here in the UK we should entrust our Parliament – or at least a section of our Parliament like the Intelligence and Security Committee, already authorised to scrutinise the UK’s intelligence services – with the permissions to oversee specific aspects of the country’s special forces, thus ensuring a more strategic debate about UKSF’s role in the UK’s defence and security policy.

Liam Walpole – Remote Warfare Programme
Liam Walpole has been Senior Advocacy Officer at Remote Warfare Programme since July 2017. Previously, Liam worked for two Conservative Members of Parliament at the House of Commons, supporting them in carrying out their duties in Parliament and their respective constituencies. Liam has an undergraduate degree in Politics and History from Brunel University and a  Master’s Degree in Diplomacy and Foreign Policy from City, University of London.