Since the end of the Great Recession nearly a decade ago the US has seen consistent growth and falling unemployment, but wages have remained relatively stagnant, a trend which many have attributed to the decline in workers’ bargaining power. Nathan Wilmers argues that this flat wage growth may also be down to the rise of outsourcing and large buyers. These large buyers, he writes, can pressure suppliers to cut costs, such that a 10-percent increase in revenue reliance on them is linked to suppliers’ wages decreasing by 1.2 percent.

Slow wage growth since the Great Recession has been puzzling. As the economic recovery has clocked eight years of growth, unemployment has dropped, but real median wages have barely increased. Commentators have looked for explanations in everything from the rise of artificial intelligence to the scarring effects of the decade-old economic crisis. However, slow US wage growth has a longer history. Relative to the rapid growth marking the post-World War II period, median real wages have grown little since the 1970s (except for the economic boom of the late 1990s).

A growing body of research points to the decline in worker bargaining power as a core explanation. The long membership decline of labor unions has made it harder for workers to demand higher pay. In some local labor markets, increased market concentration has left few employers able to dictate terms to workers. The real federal minimum wage has slipped by around 30 percent from its peak in the late 1960s.

In recent research, I found another, more subtle reason why worker bargaining power has declined. When workers bargain over wages with employers, it is not just their clout vis-a-vis their immediate employer that matters. A combination of rising outsourcing and consolidation of large buyers has left more and more workers employed at companies dependent on a few outside buyers for sales revenue. These large buyers can effectively pressure suppliers to reduce wages: If buyers demand price and cost-cutting, often suppliers pass these pressures along to their workers.

These buyers do not see or meet their suppliers’ workers. This social distance means large buyers can ignore the fairness norms and social pressure that would otherwise raise workers’ pay. For example, when companies outsource janitorial or security workers, these outsourced workers face slower wage growth. 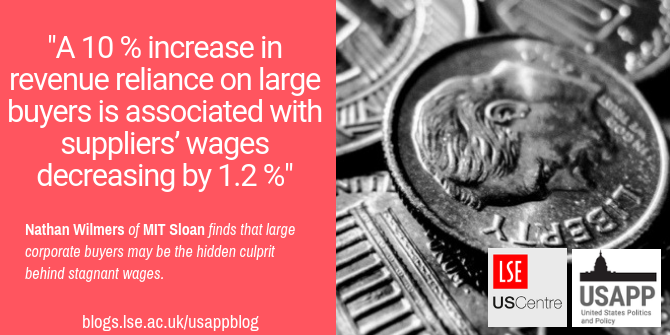 Photo by Shot by Cerqueira on Unsplash

Unfortunately, there is not much information collected on buyer-supplier contracting relationships in standard wage data. I took advantage of a reporting requirement imposed on publicly-traded companies since 1978, which stipulates that a supplier company disclose any sales to buyers that account for 10 percent or more of the supplier’s annual revenue. This disclosure requirement offers a rare opportunity to directly observe supplier reliance on large corporate buyers.

I find that as supplier companies increase their reliance on sales to large buyers, suppliers’ workers face real wage declines. A 10-percent increase in revenue reliance on large buyers is associated with suppliers’ wages decreasing by 1.2 percent. The longer these buyer-supplier relations last, the more wages fall. I also found that mergers among buyers reduce suppliers’ wages, suggesting that wage declines are a result of effective pressure from buyers. These data only cover publicly-traded suppliers, and they only cover companies that report payroll and employment information. But pending future research, policymakers should start considering ways to respond to these trends.

This bill centers on a blacklist of California trucking companies that have shirked penalties for employment law violations. Another initiative, at the federal level, by the Department of Labor to strengthen joint employer responsibilities in 2016, has been rolled back under the Trump administration. Private-sector responses to supply chain labor problems have led to supply chain codes of conduct. But these codes have been oriented toward the worst abuses of forced labor, child labor and safety violations in developing countries.

Given the moral severity and urgency of these problems in global sourcing, companies have focused less on supporting good jobs domestically. Given the growing policy concern over wage stagnation, large buyers face reputational and regulatory risks if they ignore employment among their suppliers. These companies should explore extending codes of conduct to lessen wage pressure on suppliers, both domestic and international.

However, if transparency measures and voluntary compliance is not enough, it may be necessary to shift the distribution of underlying economic power. For example, antitrust enforcement could consider a stronger balance between consumer and worker welfare. When buyer mergers and market dominance undermine wage growth among suppliers, effects on downstream consumer prices and upstream worker welfare could both be considered in antitrust analysis.

Nathan Wilmers – MIT Sloan
Nathan Wilmers is an assistant professor of work and organization studies at the MIT Sloan School of Management. He researches wage and earnings inequality, economic sociology, and the sociology of labor. In his empirical research, he studies how wage stagnation and rising earnings inequality result from weakening labor market institutions, changing market power, and job restructuring. More broadly, he is interested in bringing insights from economic sociology to the study of labor markets and the wage structure.