In new research, David Niven, Anwar Mhajne and Alexis Straka find that, in general, compared to men, women candidates are more likely to answer voters’ questions in vague and less specific ways, a tactic which is linked to greater chances of winning elections. They comment that given that women draw votes at the same rates as men, they may need to run more sophisticated campaigns in order to overcome existing negative assumptions about women candidates.

A record number of women – 127 – were elected to the United States Congress in 2018. Expectations are high for 2020; with an unprecedented number of women already having signaled their candidacy for president.

Despite the progress, women are still underrepresented in elected office relative to the US population (just under 28 percent of Congress to about 51 percent of the general population). The search for causes for this imbalance continues, but our research offers an important clue. We find women candidates in the US are running better campaigns than men.

Previous research in political science shows that in order to win elected office, candidates are better off providing vague, less-specific answers to policy questions. Based on a nationwide sample of 1300 candidates across the United States running for all manner of prominent and obscure offices in 2016, we find that women are more apt than men to answer policy questions strategically rather than transparently.

The contrast this represents can be stark.

When David Todd, a Republican state house candidate in Ohio, was asked about the most important issues facing the people of his district, he provided a lengthy and comprehensive response before adding that we should elect “someone who loves their pet like a child.”  His opponent, Kristin Boggs, focused on jobs, without offering specifics. Boggs won the election, while Todd won 27.8 percent of the vote.

We repeatedly found that female candidates across the country were relatively more sophisticated. Celia Israel, a successful incumbent candidate for the State House of Representatives in Texas, and a Democrat, offered a typical and entirely non-specific response when asked about transportation: “Whether Republican or Democrat, we all sit in Central Texas traffic together. I continue to believe transportation is a nonpartisan issue that we can work together to improve.” In contrast, Louis Herrin, a candidate for the Austin City Council who attracted 16 percent of the vote, offered this on the subject of transportation: “In twenty years, I hope people will be able to move from the north side to the south side of Austin in a reasonable time with many different ways to get there. The way we travel will be different in twenty years—with driverless vehicles, hover cars, and perhaps air tubes, moving sidewalks, etc. like the cartoon Jetsons.” 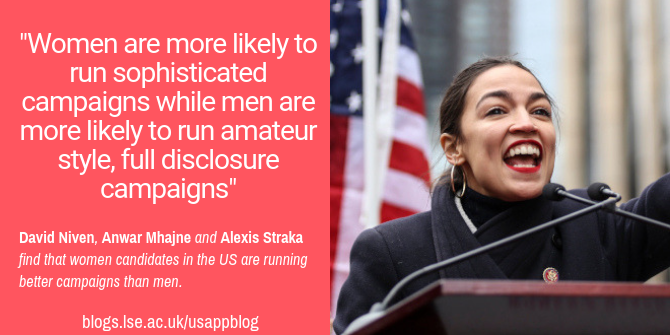 This is not to assert that fondness for pets or a fascination with the Jetsons determined the outcome of these elections.  However, across countless examples one can see the advantage of the non-specific, non-ideological response over full transparency. Most everyone in Austin does sit in traffic. Most everyone in Ohio does want to see more jobs created. The same consensus cannot be said to exist for Jetson’s sidewalks or treating pets like children.

The findings we present tie into a growing body of literature in political science surrounding women’s political ambitions.  The results of these studies show that women, on average, need to feel much more prepared and have much greater support when deciding to run for office than men with otherwise similar skills, abilities, and career training.  We argue that this conditional ambition reduces the number of women who run, but increases the sophistication of the campaigns women do run.

There is good news here. Women are running higher quality campaigns and positioning themselves for success. However, there is a disquieting implication here too. Given that research suggests women draw votes at comparable rates as similarly situated men, it is widely believed that voters support men and women candidates equally. But our data suggest that women are running higher quality campaigns. If that is the case, then the capacity of women to draw equal votes is not evidence of fairness but evidence of an imbalance in which women have to run better campaigns just to stand equally with male candidates.  Therein lays an important clue to a gender imbalance in the rosters of elected office that has endured for centuries.

Anwar Mhajne – Stonehill College
Dr. Anwar Mhajne is currently a postdoctoral teaching fellow at Stonehill College. She is a political scientist specializing in international relations and comparative politics with a focus on gender and politics. Her current research is at the intersection of gender, religion and Middle Eastern politics. Dr. Mhajne focuses on how Islamic beliefs and institutions in the Middle East structure Muslim women’s political understandings, agencies and opportunities at local, national and international levels.

May 6th, 2019|Alexis Straka, Anwar Mhajne, David Niven, Elections and party politics across the US|0 Comments
Previous post Next post