President Trump recently discussed the potential for infrastructure reform with Democratic leaders. One way such large projects can be paid for is via public-private partnerships. In new research, Stephanie Farmer and Chris D. Poulos examine the development of such partnerships in Chicago during the tenure of Mayor Rahm Emanuel. They find that through political campaign contributions and involvement in business civic organizations, global financial interests have been able to influence infrastructure planning and priorities, including promoting public-private partnerships as a means of financing projects. These projects, they write, often see financial firms maximizing their own profits from public infrastructure.

Recently, President Trump and Democratic Congressional leaders met to discuss a $2 trillion deal to rebuild and modernize the nation’s infrastructure.  While the talks did not specify how projects will be financed, private finance capital is well-positioned to play a central role in a public works program given strong bipartisan support for public-private partnerships (P3s).  The recent history of Chicago’s infrastructure planning reveals how private financial interests have gained influence within local governments, enabling financial firms to prioritize local infrastructure projects that generate income streams for profit-making over other public policy goals, like environmental and economic justice.

The public is nearly always on the losing end of these deals. P3s have resulted in the loss of public control over space, increased user fees to access public goods, penalties activated by obscure contractual clauses, and a reconstitution of municipal governments’ priorities from providing public goods towards guaranteeing income streams for investors.

P3 risks, pitfalls, and failures are considerable. Why then do P3s continue to be posed as the ‘creative solution’ to infrastructure planning and investment?

The growth of public-private partnerships in Chicago

Our research shows how a set of global financial actors have taken a keen interest in municipal governance in order to create favorable conditions for extracting income from cities. In forming alliances with urban political and economic actors, these global financial actors have gained influence over urban infrastructure planning and financing in ways that play to their interests of making profits from public infrastructure. They have achieved this political influence over urban planning processes through traditional routes, like campaign contributions and participation in local business civic organizations, and by inserting their agents in decision-making positions and remaking local planning and financing institutions. 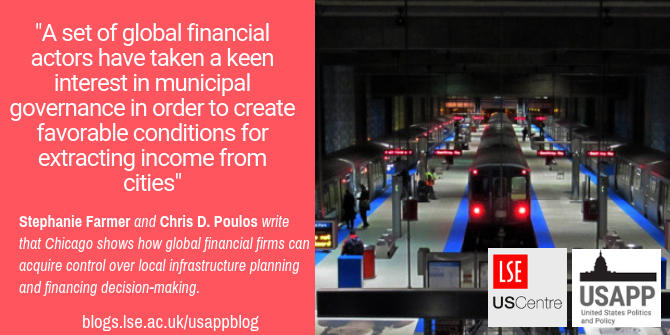 “Second helping of the Second City – 21” by Gary McCabe is licensed under CC BY SA 2.0

Importantly, financial capital has taken a more direct role in planning initiatives and reshaping both regulatory frameworks and brick-and-mortar infrastructure in Chicago through World Business Chicago (WBC).  WBC is the economic development policy wing of the Commercial Club of Chicago, the most powerful and enduring business civic organization in Chicago.  Almost half of the World Business Chicago board is composed of executives from financial firms like Grosvenor Capital Management and Goldman Sachs. Many of these financial firms have established infrastructure investment funds and have provided legal services and operations management for infrastructure P3s.

The financialization of urban infrastructure

Occupying the commanding heights of urban governance has allowed finance capital to articulate urban problems and solutions in a way that presents financializing urban infrastructure – often presented euphemistically as ‘creative solutions’ to declining federal and state revenues – as the only course for policy makers to take.  Enacting these plans and initiatives enable financial elites to have a profound sway over what gets built and how it is financed.

For example, WBC ranked a non-stop express train service from O’Hare International Airport to the downtown Loop as a top transit priority. The city already has a public train, the Blue Line that connects O’Hare to the Loop while making stops at local train stations between the two locations.  WBC envisioned the redundant O’Hare Express train as a fully privatized project to trim travel time down for affluent riders by twenty minutes.  Meanwhile, poor and working-class people endure long wait times and overcrowding on many CTA bus and train routes, while the city lacks transit connections between neighborhoods and to job centers in the suburbs.

Agents of financial firms regard CIT as a testing-ground for transferable policy lessons for other cities forming their own P3 municipal bank. Policy replication is a key reason former President Bill Clinton, representing the Clinton Global Initiative (CGI), attended the Trust’s launch, acknowledging, “What we’re trying to do is to get other cities to do the same thing” as the Chicago Infrastructure Trust.

The encroachment of global financial actors in Chicago’s local government holds lessons for supporters of the New Green Deal (NGD).  While New Green Deal proponents promote the dual goals of environmental and economic justice, they could end up further empowering financial elites and undermining their equity objectives if NGD projects are channeled into local institutional frameworks shaped by financial elites. By financing NGD projects with federal revenues collected by taxing wealth, the New Green Deal could play a role in reversing the course of neoliberal devolution and austerity policies that have starved cities and have left many poor and working-class people behind.