Former Vice President Joe Biden leads in recent Democratic primary polling, and is considered by many to be the front-runner to win the Party’s presidential nomination next year. Biden’s presidential ambitions have meant that greater scrutiny has been placed on his 36-year Congressional record.  Richard Johnson takes a close look at then-Senator Biden’s opposition to the federally mandated system of busing to reduce segregation in US schools in the 1970s. He writes that Biden vowed to eliminate busing if he could and felt that the practice was actively harmful. By the 1980s, however, busing had proven to be effective as a policy measure for reducing school segregation.

Since he announced his planned presidential run at the end of April, former Vice President Joe Biden has opened up a commanding lead in the 2020 Democratic primary field. At the same time, commentators have revisited his legacy as US Senator for Delaware from 1973 to 2009 with his record on judicial and criminal justice policy in the 1990s attracting particular interest.

In 1994, Joe Biden was the author of the Violent Crime Control Act, which many credit as contributing to the US’s exceptionally high incarceration rate. In this decade, Biden was the chair of the Senate Judiciary Committee, and some commentators argue that he oversaw an unnecessarily hostile interrogation of the lawyer Anita Hill, who accused Supreme Court nominee Clarence Thomas of sexual harassment.

With these episodes in the forefront, less attention has been given to Biden’s role in another major area of social policy at the start of his Senate career: the integration of America’s racially segregated education system.

The 1970s were an unusual period of judicial activism on racial justice. In response to policy failure and poor enforcement, federal courts took decisive steps to integrate American public schools. One of their most powerful, effective, and controversial tools was the practice of ‘busing’. It was believed that simple ‘neighbourhood’ schooling – whereby students attended the school nearest to where they lived — could never achieve racially mixed schools, given the dense racial segregation of American housing. Therefore, children would be ‘bused’ from different communities to form schools which reflected the overall, mixed racial distribution of a school district. One of the leading opponents of these desegregation efforts was Delaware Senator Joe Biden.

Busing as a measure to encourage school desegregation

In the immediate years after the landmark Brown v Board of Education ruling (1954), little changed with respect to the racial segregation of American schools. Schools were nearly as racially segregated in mid-1960s as they had been in mid-1950s. Ten years after Brown, the average black child attended a school which was only 1.5 percent white. The Civil Rights Act of 1964, powerful in many respects, made exceptions for state education. Section 401 of the Civil Rights Act qualified that, ‘“desegregation” shall not mean the assignment of students to public schools in order to overcome racial imbalance.’ This caveat permitted schools to remain mono-racial so long as they did not actively discriminate against applicants. Neither the Civil Rights Act nor the Elementary and Secondary Education Act placed a requirement on schools to seek racial balance across a school district or geographical area.

Progress was finally made after the US federal court system intervened. Federal courts compelled hundreds of jurisdictions around the country to take active steps to integrate. In Green v County School Board (1968) and Swann v Mecklenburg County (1971), the Supreme Court embraced plans which moved children proactively across school districts in order to achieve a racial balance. These plans were deeply unpopular with many white Americans and were resisted, often violently. The Ku Klux Klan bombed ten school buses in Pontiac, Michigan to prevent them from being used to increase racial integration. Some of the most extreme resistance occurred in Boston in the mid-1970s. There, violent clashes led Massachusetts Republican Edward Brooke, the lone African American in the US Senate, to write a letter to his constituents telling them that he was ‘ashamed’ of the protests. Brooke wrote that the anti-integration movement in Boston ‘reveals that the fear, the hate, the suspicion that is racism looms darkly not only in the Heart of Dixie but in the Cradle of Liberty.’ 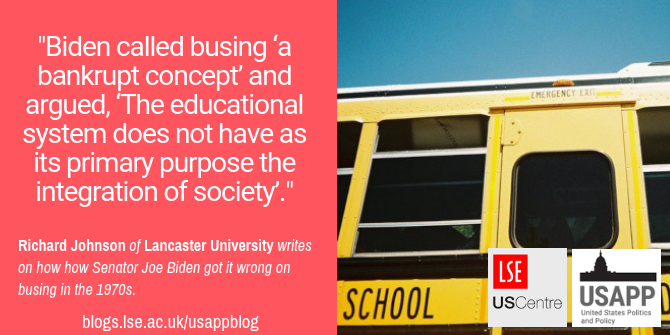 “School bus” by Kevin Dooley is licensed under CC BY SA 2.0

In Congress, efforts were made to limit courts’ ability to impose busing. North Carolina Senator Jesse Helms, an unapologetic supporter of segregated schools, proposed a motion which would forbid districts from keeping records of the racial make-up of schools, rendering busing impossible. After the Helms amendment narrowly failed, Senator Joe Biden stepped up to offer his own anti-busing proposals. Biden told his Senate colleagues that he supported the principles behind the Helms amendment, and Senator Helms, ‘welcome[d] the Senator from Delaware into the ranks of the enlightened’.

Biden attempted to defend his position on the grounds that racially mixed schools were not essential to quality education. Black children could get a high-quality education in an all-black school. In an interview with the black journalist William Raspberry, Biden criticized pro-busing advocates, ‘What they are saying is that your black, curly-haired son has to be in class with my white, straight-haired one before he can get a decent education. I might add that I don’t feel responsible for my father’s sins – only for my sins’. Biden sent his own children to private schools.

Biden called busing ‘a bankrupt concept’ and argued, ‘The educational system does not have as its primary purpose the integration of society’. His amendment barred the use of federal funds ‘to assign teachers or students by race’. Edward Brooke lamented that the Biden amendment was ‘the greatest symbolic defeat for civil rights’ in years. ‘It’s just a matter of time before we wipe out the civil rights progress of the last decade’. In the end, the Biden amendment was removed in conference committee, but the Delaware Senator had established himself nationally as a leading opponent of busing.

In 1975, US News & World Report paired Brooke and Biden against each other in parallel interviews: Biden represented the forces opposed to busing, Brooke represented those in favor. Biden vowed, ‘I would eliminate forced busing under any circumstances’, while Brooke argued that racially mixed schools were an essential element in building a healthy, racially integrated democratic society. While Biden had attended an overwhelmingly all-white private school, Brooke had been educated in segregated, all-black public schools in Washington, DC.

In 1978, Brooke lost re-election, in large part due to his staunch support for busing, which historian Jason Sokol described as ‘committing political suicide’. In spite of being a Republican, Brooke received support from prominent African Americans such as Jesse Jackson and Coretta Scott King, who both came to Massachusetts to campaign for Brooke. Massachusetts’s leading black newspaper wrote that Brooke’s ‘absence in the Senate would be an obvious disaster to minorities’.

The success of busing

In spite of their unpopularity, the schemes which bused children from racially homogenous neighbourhoods to racially heterogeneous schools were largely successful. Racial segregation in US schools plummeted between the late 1960s and 1980s. By 1988, the high watermark of school integration in the US, nearly half of black children (43.5 percent) in the US attend a school which was predominantly white. At this time, about 750 school districts across the United States were under court-imposed desegregation orders, continually monitored by judges to ensure progress in integration. Busing wasn’t a popular or an elegant solution, but it was one which worked. Joe Biden had vowed to ‘eliminate forced busing in all circumstances’, seeing it as a step too far to achieve a racially integrated society.

Richard Johnson – Lancaster University
Dr Richard Johnson is a Lecturer in US Politics at Lancaster University. He researches race and democratic inclusion in the United States, with a particular focus on African American politics. He has interviewed and written about Senator Edward Brooke in the Journal of Race, Ethnicity, and Politics. With Desmond King (Oxford), he has recently co-authored an article on school segregation in the Journal of International and Comparative Social Policy.