Earlier this month US and Afghan forces bombed 68 drugs labs in South-western Afghanistan, claiming that they caused the Taliban losses of over $1 million per day. David Mansfield and Alexander Soderholm write that not only have the effects of these strikes been exaggerated, their promotion obscures a new reality on the ground: a dramatic growth in the methamphetamine industry in Afghanistan, fuelled by a ready supply of a home grown ephedra crop.

It’s an old saying that the definition of madness is to do the same thing again and again and expect a different result. Yet this is what the United States Forces Afghanistan (USFOR-A) and their counterpart the Afghan National Defence and Security Forces (ANDSF) did on 6 May 2019 when they bombed 68 drugs labs in Southwestern Afghanistan. They even repeated the madness of grossly exaggerating the scale of financial losses these raids caused the Taliban, claiming losses of $1 million per day.

This latest raid on drugs labs in Afghanistan follows a year-long campaign that USFOR-A claimed destroyed 200 labs and denied $46 million to the Taliban in revenue. The campaign all but ceased in September 2018 after being subject to considerable criticism for its exaggerated estimates of the amount of drugs destroyed and the values denied to both drug traffickers and the Taliban. In striking inactive labs and misunderstanding the taxation system that operates in these areas, the campaign had a negligible effect on revenues and proved a poor use of resources. 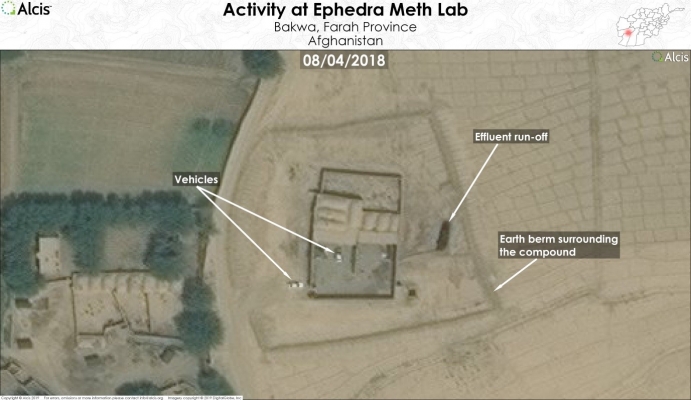 This time all 68 labs were destroyed in one single day in one district: Bakwa in the province of Farah. Official estimates claimed that these 68 labs generated $US 1 million in revenue to the Taliban per day but gave no account of the amount of drugs destroyed. Accompanying these official reports, were claims in the media of casualties, some suggesting as many as 150 people killed. The United Nations are now looking into the veracity of these reports.

What is of interest is the  difference in the way this particular aerial bombing has been portrayed. This time the strikes and the particularly exaggerated account of the revenues denied was justified on the basis that these particular labs produced methamphetamine not heroin; and that meth prices are significantly higher. Yet, in Bakwa this makes little difference to the revenues generated to the Taliban. Tax is charged per kilogram of “powdah”; be it morphine based, heroin based, heroin hydrochloride or methamphetamine: the amount is the same $5.70 per kilogram produced. Price is irrelevant and given its variability over time it is far harder to manage a tax system and revenue flows where payments are not fixed and a function of a unit produced. The reported losses of $US 1 million per day to the Taliban would have meant that each of these labs was producing almost 2.5 metric tons of powder each day. This would have required over 300,000 boxes of decongestants pills each day, or between 250 and 750 metric tons of ephedra based plant; a logistical impossibility given the size and nature of these labs.

While this recent aerial campaign does highlight the folly of doing the same thing regardless of the results (and the problem of bad math!) it does reflect an important development in Afghanistan that has largely been missed by the media and scholars with all but a few exceptions; that of a burgeoning methamphetamine industry and the dramatic effects it is having on the ground, not just in the deserts of Bakwa but across Afghanistan, and very possibly further afield.

Until recently methamphetamine production in Afghanistan was largely small scale; the kind of “kitchen labs” seen in other parts of the world. In fact there is considerable evidence that the knowledge of methamphetamine production came from neighbouring Iran; a country that has seen its own meth industry go through dramatic changes. Since the mid 2000s, methamphetamine, known locally as shisheh, has been a major challenge for law enforcement and health practitioners in Iran. While poppy cultivation was virtually eliminated in Iran following the 1979 Islamic Revolution, the domestic production and consumption of meth has soared, in particular since 2010.

Iran as a methamphetamine producer

Prior to 2004 much of the methamphetamine consumed in Iran was imported from Southeast Asia, mainly Malaysia and the Philippines. Over time, Iranian producers learned the production methods and began domestic production. Production on home soil proved much cheaper, and according to sources with insight into the Iranian methamphetamine trade, the early years were very profitable for producers. Knowledge of production methods proliferated, so much so that whereas four so-called ‘kitchen labs’ were found and destroyed in 2010, the Iranian Drug Control Headquarters (DCHQ) identified and dismantled 445 labs in 2013. Moreover, seizures of Iranian meth have even been reported in Turkey and as far as South-East Asia and Australia.

Over time Iranian producers have had to adapt to increased law enforcement and regulation. Whereas production methods based on Over-The-Counter (OTC) decongestants were preferred by Iranian producers for many years, in 2012 the regulation of OTC pharmaceuticals started catching up. These regulatory efforts, such as changes in the pharmaceutical composition of decongestant pills, rendered the extraction of ephedrine from OTCs more complicated, and produced lower yields of ephedrine. As such, many producers turned to sourcing base-ephedrine, either diverted from the licit pharmaceutical industry or smuggled over the border (from places such as Iraqi Kurdistan and the city of Sulaymaniyah).

Ultimately, law enforcement efforts in Tehran alongside restrictions on the purchase of OTCs containing pseudoephedrine and the influx of new producers have curtailed domestic production. Keen to maintain their supplies, traders and cooks from Iran have trained counterparts in Afghanistan. Afghan migrants are also thought to have skilled-up in Iran, returning home with the necessary knowledge and contacts to start their own businesses cooking meth. These are the very same patterns of knowledge transfer that led to meth production proliferating in Iran. As a former Iranian meth producer explained, ‘You need karegars (labourers), because it is a very intense job with high input costs. I had to hire 2-3 people to perform the labour. They come and learn for a couple of months and then tell themselves ‘we can do this ourselves – this is easy!’, and so they themselves start producing and get their own karegars.’

After only a few years in production it is now meth producers in Afghanistan that are learning to adapt. Until 2018, cooking in Afghanistan involved large amounts (see Figure 2) of decongestants either in the form or syrups like actifed or tablets such as panadol-cf (cold and flu). Facing rising production costs and production losses, meth lab owners and operators began to source a local plant known as Oman (Figure 3). Growing wild in the mountains of Afghanistan, in the past this crop was typically a mere sideline for poorer members of the village with little else to do. They would collect the crop intermittently during the harvest period and sell it on to traders in the cities who transported it on to India and Pakistan as a medicinal crop. Its harvest was arduous, and involved climbing to over two thousand five hundred metres and moving from plant to plant across rocky and arid terrain (Figure 4). Armed with a sickle, villagers would cut and collect the new shoots from the plant over the three month harvest period. 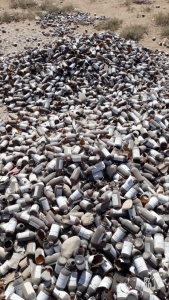 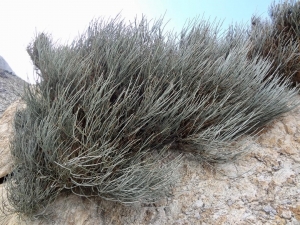 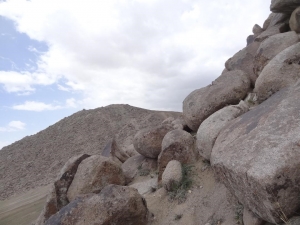 Now the harvest of Oman has become big business. So much so that in the summer and fall of 2018 traders from Farah and Helmand could be found at the foothills of the mountains, willing to buy the crop at the “mountain gate”. What is more growing market demand led to the prices of Oman increasing threefold between 2017 and 2018 and attracted further villagers during the harvest period. No longer just the purview of the poor, students would harvest the crop once their studies were done and shepherds joined in the fray. In parts of Ghazni, the harvest of Oman has become a daily job over the course of the 3 month harvest, and an important part of a households overall livelihood portfolio. Capable of harvesting a large plant, or up to 70 kilograms a day, a villager and his donkey could earn up to US$125 per day for their labours.

As yet the extent of the crop in Afghanistan is unknown but there are reports of Oman growing wild in the mountains of Wardak, Ghor, Helmand, Uruzgan and Ghazni. The scale of production is even harder to judge. Ball park figures indicate the production from a valley of 15 villages in Ghazni could be as much as 2,500 metric tons in a single season. This is enough Oman to produce anything from 8 to 25 metric tonnes of methamphetamine. With 192,000 square kilometres of mountainous land over 2,500 metres altitude in Afghanistan where the crop could grow (Figure 5), there is certainly no shortage of the raw product.  With meth producers in Afghanistan celebrating a 50 per cent reduction in production costs by using Oman, and supply routes for ephedra developing fast (Figure 6), it is perhaps only a question of time before Afghanistan’s methamphetamine industry rivals its heroin trade. 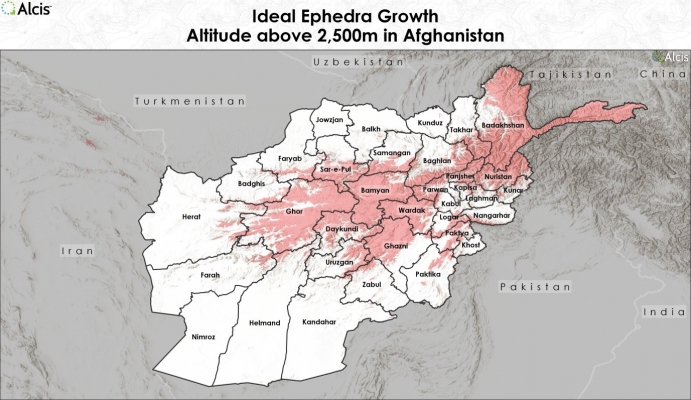 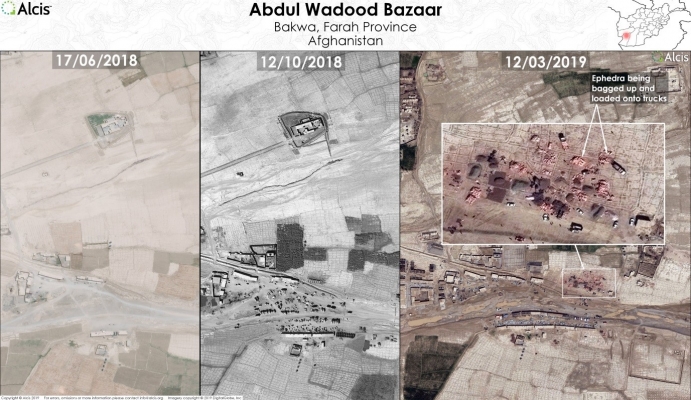 Given the potential scale of Oman production in Afghanistan it is perhaps not surprising that USFOR-A found such a target-rich environment in Bakwa. But you have to wonder if the destruction of 68 labs in one day made much of a dent.

An even more pressing gap in knowledge is: where is all this methamphetamine going? While Iranian traders and cooks might have been looking to secure supply in the wake of a more restrictive environment in Iran, it is hard to believe this new expansive supply is being absorbed solely by consumers in Iran. With its reputation as a party drug in the region it is hard to believe much of this increased meth production is being consumed in Afghanistan. There is of course market possibilities in the region in UAE, particularly Dubai and Abu Dhabi, as well as Bahrain, India and possibly Saudi Arabia. But how about further afield? Is it such a stretch to think that it is only a question of time before methamphetamine producers in Afghanistan, begin to take advantage of the well established contacts and routes used by heroin traders into Western Europe? Has Afghanistan added a new low cost drug crop to its already diverse portfolio?

David Mansfield – Independent Consultant
David Mansfield is an Independent Consultant. He has been conducting research on rural livelihoods and poppy cultivation in Afghanistan for 23 consecutive growing seasons. He has a PhD in development studies from the School of Oriental and African Studies, London, he is the author of A State Built on Sand: How Opium Undermined Afghanistan, and he is on the editorial board of the Journal of Illicit Economies and Development. David has also worked for the Afghanistan Research and Evaluation Unit since 2005.

Alexander Soderholm – Policy Coordinator, LSE International Drug Policy Unit (IDPU), LSE US Centre
Alexander Soderholm is the Policy Coordinator of the IDPU. He holds an MSc in International Development and Humanitarian Emergencies from the LSE, and is currently an MPhil/PhD Candidate in Social Policy at the LSE Department of Social Policy. His PhD project is titled ‘Drugs, Livelihoods, and Development: The Role of Illicit Markets in Determining Development Outcomes’.