Though increasingly popular, Hip-Hop is still subject to fear and discrimination in many parts of the United States due to the racist stereotypes of white culture. In new research which examines data covering police calls to bars in Madison, Wisconsin, Randy Stoecker, Karen Reece, and a group of students found that live Hip-Hop performances are no more linked to violence than are other genres of music such as country or karaoke. In light of their results, there is no reason for live Hip-Hop to be singled out for censorship or extra policing based on an association with violence.

While Hip-Hop has found increasing popularity around the globe, it is still feared and discriminated against in many parts of the US. Even in cities with a reputation of being progressive, like Madison Wisconsin, bars enforce dress codes that discriminate against Hip-Hop attire, censor rap music found on the digital jukeboxes, and deny local artists stage time. Hip-Hop is seen as a genre that attracts Black audiences and violence.

The problem is that the association between Hip-Hop and violence exists only in the racist stereotypes of white US culture.  In 2016 and 2017 the Urban Community Arts Network (UCAN) —an organization dedicated to confronting stereotypes against Hip-Hop—and a professor and students from the University of Wisconsin-Madison’s Department of Community and Environmental Sociology, partnered up to test the hypothesis that Hip-Hop attracts violence.  Our research shows that Hip-Hop was no more associated with violence than many other music genres, including country and even karaoke.

How did we research this hypothesis?  Because UCAN focuses on supporting Hip-Hop artists in Madison, we decided to concentrate our research on the city so that UCAN could use it for their campaign to end local discrimination against the genre. Madison is a city of a bit over 200,000 people, and is home to the State of Wisconsin’s flagship university and the state capitol.  It is also a majority white city in an overwhelmingly white and culturally conservative state. The City of Madison is located in Dane County, which has some of the largest Black:white racial disparities in the United States.

To our knowledge, this is the first time anyone has studied whether live Hip-Hop is associated with violence.   We started with two Madison police department data sets.  One included all the police calls for the 63 Madison bars with entertainment licenses over an eight-year period. The other included charges filed from those calls.  We whittled the first data set down to get rid of all the irrelevant calls (things like liquor license checks and other calls unrelated to crimes) as well as calls during hours when there would not be a performance (basically mornings and afternoons).  We ended up with a data set of 4,624 calls for service and then matched those calls to the charges filed data set.  The students then took each call for service and searched whether there was a performance for each call at each bar, and what the genre of the performance was.  This was a task easier said than done, but in the cases where we could not find hard data for a call we could fill in the gap based on knowledge of each bar’s history of bookings.

Overall, we found that there actually is not a lot of difference among genres in terms of proportions or types of police calls.  But we took great care to be cautious in our analysis because our data set did have some gaps. So we analyzed our data in a variety of different ways to see if any analysis would show an association of live Hip-Hop with violence.  In one analysis we looked at the number of police calls per month per genre, looking at each performance venue and developing a ratio of calls for each genre compared to the total calls for that venue.  Live Hip-Hop came in below country, electronic dance music, DJs, and a mixed genre that included other genres associated with or mixed with Hip-Hop.  When we looked at the proportion of calls that resulted in charges being filed, live Hip-Hop came in below country and jam bands, and was tied with electronic dance music.  In another analysis, looking at the proportion of police calls that could be classified as involving violence (using the federal Uniform Crime Report codes), live Hip-Hop was below punk, karaoke, and the broad category of Hip-Hop mixed or associated with other genres, and was tied with Latin and hard rock/heavy metal. 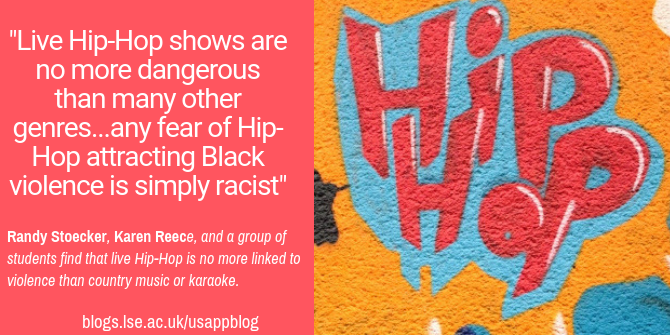 Photo by Ben Wiens on Unsplash

What are the implications of our research?  First, and most importantly, there is simply no reason that live Hip-Hop should be singled out for censorship or extra policing based on an association with violence.  Live Hip-Hop shows are no more dangerous than many other genres.  Second, any fear of Hip-Hop attracting Black violence is simply racist.  County, punk, karaoke, and hard rock/heavy metal are some of the whitest music genres available.  We don’t know of any Madison bars with dress codes prohibiting cowboy hats.

But this research alone will not eliminate the racist attitudes leading to discrimination against Madison Hip-Hop artists. The broader population needs access to more accurate portrayals of Hip-Hop artists.  Toward that goal, we conducted a second study of how the major Madison newspapers covered Hip-Hop during the same period as our study of police calls.  In that study, the same professor and another group of students found 343 news stories about Hip-hop for the three most prominent local newspapers and coded those stories on a variety of dimensions, including the race of the artists, and how positive or negative the coverage was.  The most widely read newspaper, the Wisconsin State Journal, had the most negative coverage of Hip-Hop.  And across the three main newspapers Black artists received more negative coverage than white artists.  Such portrayals certainly do not help efforts to undo racism.

The effort to end discrimination against Hip-Hop is making some progress, however.  In 2018 UCAN convinced the city government of Madison to establish a Task Force on Equity in Entertainment and Music, and allowed UCAN to lead it.  That task force, working from our research and their own knowledge, produced a set of 31 recommendations accepted by the Madison city council.  But that does not mean anything will change.  Now the hard work begins to get the city to implement the task force’s recommendations.  And the struggle continues.

Note:  We appreciate the support of the University of Wisconsin-Madison Morgridge Center for Public Service, who provided paid student interns to help with all of our research projects, the involvement of all the students in the capstone courses, and the many people who helped provide us with data, and participated in interviews.

Randy Stoecker – University of Wisconsin-Madison
Randy Stoecker is a Professor in the Department of Community and Environmental Sociology at the University of Wisconsin-Madison with an affiliate appointment in the University of Wisconsin-Extension Center for Community and Economic Development. He conducts trainings and speaks frequently on community organizing and development, community-based participatory research/evaluation, higher education community engagement strategies, and community information technology. He has led numerous participatory action research projects, community technology projects, and empowerment evaluation processes with community development corporations, community-based leadership education programs, community organizing groups, and other non-profits across a wide range of places. His complete vita may be found at http://comm-org.wisc.edu/stoeckerfolio/stoeckvita.htm