What makes a community ‘rural’? Is it its population, or its location compared to urban areas? With the federal government allocating millions to support rural development, these definitions matter. In new research, Geoffrey Propheter tests a new definition of ‘rurality’ which incorporates population, population density, and airport proximity. He finds that depending on which definition is used, the likelihood of a community adopting certain fiscal policies – such as a local option sales tax – can vary considerably.

Despite differences in program benefits and targeted public services, the overwhelming majority of these programs define what counts as rural on the basis of population. Conversely, most academic research, and few public programs, tend to define rurality in terms of a community’s location outside of metro areas, as defined by the US Office of Management and Budget.

Both of these unidimensional definitions are problematic. Defining program eligibility strictly in terms of population ignores the intuitive spatial component of rurality, which suggests that population-based definitions result in misallocation of public funds; monies that are intended to go towards truly rural communities may end up in the coffers of small towns that are economically better off given their closer proximity to urban centers. Under Colorado’s Rural Economic Initiative, for instance, the $209,000 in grants awarded to four small communities in 2016, all of which are located near to urban centers, would have been allocated elsewhere had the state used a more sophisticated definition. 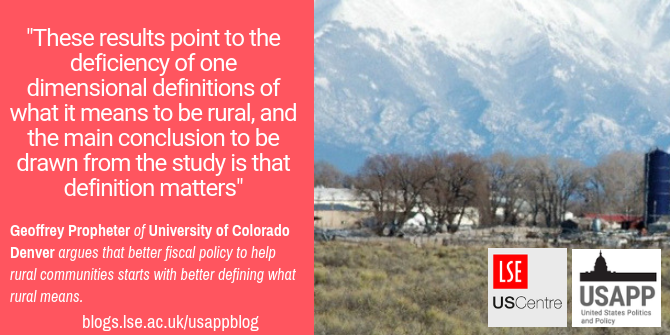 “Rural Colorado” by SLV Native is licensed under CC BY NC SA 2.0

In a recent study of municipal governments in Colorado I proposed a definition of rurality which includes more dimensions, which I then used to demonstrate that what we know about rural governments is sensitive to how we choose to define them.

I defined a rural municipality as any incorporated community having fewer than 10,000 residents, fewer than 1,000 residents per square mile, and is farther than 41 miles away from a large commercial passenger airport. I used airport distance as an indicator given the considerable research indicating airports are strong predictors of economic development, a condition for urbanization. Any community meeting only the first two definitions I categorized as a small town whereas a rural town is small but also exceeds the airport distance threshold.

Since this multi-dimensional definition is more restrictive, it is unsurprising that fewer municipalities qualify as rural compared to the more common population-based and metro area-based unidimensional definitions. In the case of Colorado, as Figure 1 shows, the population-based definition overstates the number of rural communities by 100 percent whereas the metro area-based definition overstates it by 44 percent. 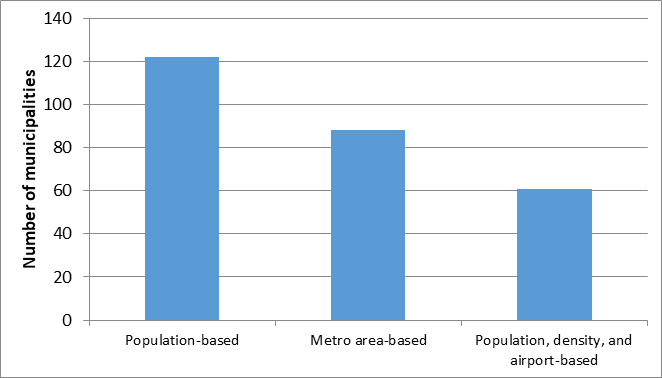 Using this alternative definition, I conducted two tests on local fiscal policy choices to demonstrate that definition matters. The first involved exploring if the spatial component of rurality matters in predicting municipalities’ fiscal characteristics. My results indicate that distance matters: rural towns are less likely to adopt a local option sales tax and rely on a narrower bundle of taxes to finance the budget, for instance, compared to small but non-rural towns. These findings are consistent with the explanation that because visitors are less frequent, rural communities cannot as easily (or at all) shift the cost of financing local public goods to visitors, unlike their smaller but more urban counterparts.

In the second test, I compared the multidimensional definition to the metro area-based definition. The results were telling. In almost every statistical model I estimated, the image of fiscal policy choices in rural towns was the mirror opposite when I used the former definition compared to when I used the latter. In the one instance where both models agreed on fiscal policy choice—the probability of adopting a local option sales tax—using the metro area definition implied the choice was about three times less likely than when using the multi-dimensional definition. The imprecision reflects the measurement error of the former, as it includes municipalities close to urban centers more likely to have a local sales tax where the tax burden can more easily be paid by visitors.

These results point to the deficiency of one dimensional definitions of what it means to be rural, and the main conclusion to be drawn from the study is that definition matters. The implication for policymakers is straightforward. If lawmakers want to preserve rural communities and appropriately target fiscal aid towards this goal, they must select a definition of rurality that aligns with the sort of communities they intend to help. The implication for academic researchers is similarly straightforward. All rural towns are small but not all small towns are rural. Researchers must measure the attributes that separate the two and include them in their models for us to have confidence in the results.

Importantly, the multi-dimensional definition I used is arguable, and there may be good cases for alternatives. What is crucial is that in defining rural, we are transparent in our reasoning and evidence for selecting one definition over another. Only by doing so can we move closer to consensus.