While popular culture has never been far from politics, the campaign and election of Barack Obama in 2008 was the beginning of a new trend of candidates and politicians embracing and influencing celebrity in much more visible ways. Giovanna Di Mauro writes that the greater accessibility of popular culture via social media and the internet means that we are now seeing the rise of ‘pop-political’ icons such as Bernie Sanders and Donald Trump at the same time as popular culture itself is becoming more political.

Popular culture and politics influence each other in an unending loop. Because pop culture is easy to access, it can produce and reinforce stereotypes, but also create ‘spaces’ of resistance. There exists a long tradition of songs, for example, advocating for human rights, and films tackling racial and class issues. This means that pop culture affects how people identify themselves and how they perceive the world around them. This effect can now be viewed in, and have an influence on, US presidential campaigns.

A new era of pop politics

Pop culture and elections influence each other. We know that celebrities often endorse candidates, but candidates similarly adopt symbols and memes from pop culture. For instance, during a 2008 democratic primary speech Senator Barack Obama referenced Jay-Z’s Dirt Off Your Shoulders by pretending to brush his shoulders with his hand. The gesture became famous.

In the same year, meanwhile, rapper will.i.am quoted President Obama to celebrate the latter’s election as president. The song called Yes We Can referenced Obama’s inaugural speech and tackled themes such as slavery and migration. This song celebrated witnessing a black man becoming president for the first time in US history. During the elections, Obama became a ‘political idol in a pop idol age’. According to some, this had paved Obama’s way to the White House. Obama’s ‘pop image’ became so pervasive that his Republican opponent, Senator John McCain, compared Obama to Britney Spears and Paris Hilton.

Obama’s election further inspired pop culture artists. It was, of course, during Obama’s presidency that the musical Hamilton gained momentum in the US. It premiered in January 2015: with black actors playing Hamilton, the iconic white founding father. Rap music, the contemporary pop cultural form, dominated the score.

One did not even need to see the production (ticket prices were prohibitive for many) to become a fan. Instead, advertising, YouTube videos, and cast interviews gave the impression that one could know everything about Hamilton. This illustrates how popular culture is capable of influencing opinion: by definition it is accessible almost everywhere to everyone, spreading quickly beyond distinct associations with time and place.

Senator Bernie Sanders, another democratic presidential candidate (in both 2016 and 2020), can similarly be considered a pop-political idol. In 2016, many considered his policies radical or subversive (he advocated free college tuition and reducing income inequality), policies that made him extremely popular with younger voters. His way of looking and speaking were caricatured on social media. ‘Feel the Bern’ became a popular hashtag and eventually a song. Ultimately, Sanders did not win the presidency (or even the democratic nomination) in 2016, but his political message survived. Moreover, many policies now adopted by those currently battling with Sanders for the 2020 democratic presidential nomination have their roots (or at least the roots of mainstream acceptance of such policies) in his 2016 challenge to Hilary Clinton. 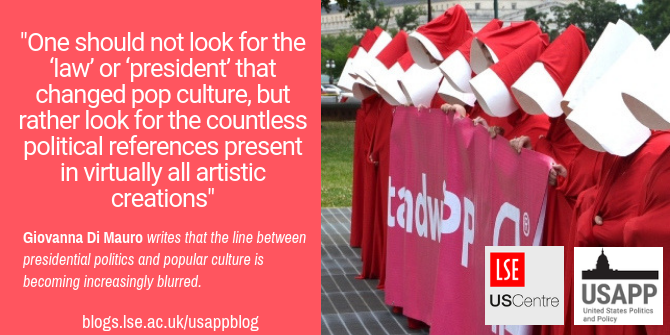 “Handmaids in red” by Adam Fagen is licensed under CC BY NC SA 2.0

If 2008 was significant for the election of Obama, the 2016 primaries saw a popular culture take-over of politics. Donald Trump conducted his campaign as a showman – and as US President he continues to do so. His tweets and public discourse recall a television show to the point that ‘political news [has become] pop culture news’. During his campaign and after his election, President Trump enjoyed the support of several celebrities, such as musician Ted Nugent and actor Dean Cain.

Since Trump launched his candidacy, many politicians have leaned in a populist direction, while much of US popular culture has become political. Even though a number of artists endorsed him, many others expressed their disappointment or dissent. In 2015, when Donald Trump announced his candidacy, South Park writers produced an episode called Where My Country Gone?. This episode mocked Trump’s candidacy and his stance on migration. In American Horror Story, the episode Election Night tells the story of a woman horrified by the election of Donald Trump.

Since his election, activists have protested Trump’s presidency, often turning to pop-culture for inspiration. Grassroots activists in New Jersey produced Baby Trump, an inflatable giant balloon featuring the President’s face, small hands and a diaper. The now iconic balloon can be ‘adopted’ and ‘travel’ across the world to be used in public events and rallies. A map of Baby Trump’s tour can be found on the organisation’s website. The balloon has appeared in rallies across the globe to protest the President’s visits, racial views and alleged sexual misconduct. Its most recent appearance was at a 2019 July 4th protest in Washington, DC.

The success of the TV show The Handmaid’s Tale is also the product of Trump’s election. The HBO show, inspired by Margaret Atwood’s dystopian novel, has become a symbol of protest and defence of reproductive rights. The red cloaks and the white bonnets present in the show have become part of a transnational collective imagination to the point that women have used them to protest against anti-abortion laws, not only in the US, but across the world. Atwood herself has attributed the renewed success of her novel, published in 1985, to Trump’s election. As such, The Handmaid’s Tale is another example of how politics influences culture, and culture politics.

With these examples in mind, two points stand out. Studying the impact of pop culture in politics need not be limited to looking for ‘the’ song or film that changed history. To the contrary, such a study can also cover the thousands of small ways pop culture influences people daily. Likewise, one should not look for the ‘law’ or ‘president’ that changed pop culture, but rather look for the countless political references present in virtually all artistic creations. It is in these creations that messages of support, dissent and resistance can be found. It will be interesting to see what the 2020 US presidential election has in store for us: how pop culture will inspire candidates, the references politicians will use to strengthen campaigns, the political themes artists will interpret, endorse or satirise.

Giovanna Di Mauro
Giovanna Di Mauro holds a Ph.D. in International Relations from the University of St Andrews. From 2015 to 2016, she was a Visiting Scholar at the Institute for European, Russian and Eurasian Studies of the George Washington University. Her research focuses on the political engagement of artists and activists. Giovanna is also interested in the use of the arts in peace-building.