Last week President Trump floated the idea that the US could purchase Greenland from Denmark, earning him a rebuke from that country’s Prime Minister. Ulrik Pram Gad writes that the spat between Denmark and Trump over Greenland shows that the president’s slow dismantling of the US-led liberal world order has now also become the problem of smaller nations – and the Arctic.

When talking about a changed Arctic these years, the starting point is usually climate change. The latest show in Circus Trump, featuring Greenland, should make it clear to everyone that the changes in international politics and economy may prove equally drastic. The liberal world order, which has formed the framework for the Danish-Greenlandic connection for generations, is under pressure, possibly dismantling, and is at least undergoing reconstruction. Foreshadowed by US Secretary of State Pompeo’s speech to the Arctic Council ministerial in Rovaniemi earlier this year, The Trump administration’s approach to alliance policy has now arrived in the Arctic. These changes are probably more difficult to maneuver for Arctic states and for European allies than those of climate change. Small players like Greenland and Denmark – and most European states – fundamentally rely on the conditions set by the outside world. We can play along, occasionally contribute nuances, and hop to shape niches.

Greenland, a territory half the size of the European Union – discounting the inland ice, it is only a bit larger than Germany – is home to only 56,000 people: indigenous Inuit mixed with Danes following love or labor market opportunities North. The island enjoys autonomy covering most domestic affairs and reaching far into foreign policy. High sea fisheries produce most export revenue, while the public purse is bolstered with a solid annual subsidy from Copenhagen. To progress towards formal independence, Greenlandic politicians have sought out a variety of ways to develop the economy in order to relieve its dependence on Denmark; lately Chinese investors have been courted to establish mines and new airports. The prospect of Chinese influence has not been welcomed in Copenhagen or Washington.

The recent world order, to which we are bidding farewell, was liberal in three different ways – each of which, on its own, positive and negative, has formed the framework for the island: First, the world order has been rights-based. Greenland has benefited – both in the form of individual human rights since formal decolonization in 1953, and in the form of the right to self-determination, which Greenland has used as a tool for nudging closer to independence. Second, it has been market-based. This feature has been a challenge for Greenland, which, due to its population size, has only a limited number of ‘natural’ markets with several competing players, and because of its geographical conditions, which turns into a handicap in relation to most global markets.

Finally, in security terms, the world order has been based on US power, but at the same time that the US has largely exercised its power in cooperation with allies. Greenland has directly felt the dark of US power in a series of incidents related to the US Airforce base at Thule cases: forced relocation of the hunting population, the crash of a B52 carrying nuclear weapons, radioactive pollution leaked from a US base under the inland ice (this wider context makes ‘The Donald’ appear almost sane.) But Greenland has also had tangible benefits when the US took over supplying Greenland with goods when it was cut off from Copenhagen during WWII. 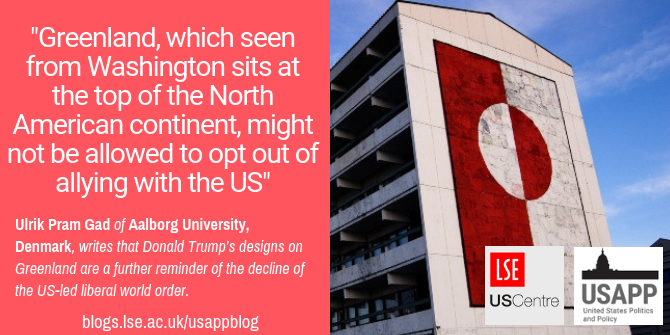 The liberal order never lived up to its own ideals. Whether one judges the overall merits of this world order that the United States has maintained – with activities and installations in Greenland as a small but important element – good or bad is less important: Both power and order have – for Greenland, for Denmark, as for the rest of Europe and indeed the world – been a more or less fixed framework for us to maneuver. Particularly in the Arctic, the liberal order has provided a quite recognizable framework for international politics and social development. Especially because it has been so strong that even its opponents have to a large extent had to orient themselves in relation to it: Russians and Americans ‘froze’ the Arctic during the Cold War. The geopolitical thaw under Glasnost allowed a new Arctic region building, in which indigenous peoples could better unfold their own visions for how to combine tradition and development, and where Russia could be counted on behaving almost like a Western state.

It is still unclear whether we are just moving into increasingly irregular times or heading for a new world order fixed in a new constellation. But even if there is a new world order underway, we are heading into changes that are difficult to maneuver with. Already today it is unclear what the right to non-interference and territorial integrity is worth. China offers not-quite-market-based, ‘long-term’ investments. The power of the United States is still in a league of its own. But, on the one hand, its power is now employed unilaterally and idiosyncratically. And on the other, it is challenged more and more clearly by non-liberal states. Mostly under distant skies, but increasingly also in the Arctic.

In this predicament, Greenland has declared itself – as formulated in the coalition agreement – “irrevocably on its way to independence”. Even before formal independence, Greenland has achieved a sizeable influence on foreign and security policy. Greenland thus has an urgent need to think hard about the consequences in the Arctic of the change in world order. If nothing else, Trump’s real estate development approach to Greenland has made it clear, that Denmark has the same urgent need to understand the changes in the world and the Arctic. But also that Denmark needs to take seriously Greenlandic reactions and priorities in relation to the changes.

Moreover, Denmark, geopolitically squeezed between Russia and Germany, and Greenland, across the North Atlantic, may have rapidly diverting conditions for conducting free choices of alliance partners. From a European perspective, we might have become used, already, to Trump treating allies like adversaries. But for Denmark, which has – no conditions, no questions asked – placed Greenland at the disposal of the US since 1945, and done its utmost to follow the US into every Middle Eastern adventure of the last decades, this episode warrants reflection. Is NATO still a valid insurance policy? Or do we need to engage with Europe in an altogether serious way? Greenland, which seen from Washington sits at the top of the North American continent, might not be allowed to opt out of allying with the US.