While the states have a great deal of independence from the US federal government, this freedom is often not extended by state governments to the cities and municipalities within them. In new research, Sungho Park examines the effects of fiscal rules like tax and spending limits, debt limits and balanced-budget requirements on states’ fiscal outcomes. He finds that municipalities which have two fiscal rules to contend with tend to have much lower revenues, but when all four rules are imposed, overriding provisions are often invoked allowing bodies to exceed these limits.

Municipal budget decision-makers do not work in a vacuum. Rather, they make decisions under certain laws and acts. Theoretically speaking, municipal budget decisions are shaped by a set of fiscal rules. These rules are expected to inject greater stability into the municipal budget process by restricting flexible budget decision-making and preventing wasteful spending, and, by doing so, enhance municipal fiscal efficiency and accountability. Municipal governments (cities, towns and villages) in the US began to experience different types of fiscal constraints in the 1870s when municipal debt began to climb due to the expansion of the railways. Since the 1990s, when mood against taxes was strong, fiscal controls on municipal governments have become a substantial part of municipal fiscal realities.

Where do fiscal rules come from? In the context of American fiscal federalism, states are often active players in adopting and implementing these rules on municipal governments as a part of their ability to override local rules – also known as preemption. Four typical examples are: state-imposed tax (or revenue) limits, expenditure limits, balanced-budget requirements, and debt limits.

The most common form of state-imposed tax limits is a constraint on municipal property taxes. In some cases, however, municipal own source revenues as a sum of taxes, fees, fines and user charges are subject to limits. Balanced-budget requirements are anti-deficit rules, and are intended to prevent municipal governments from having negative budget balances in any given fiscal year. Debt limits set the amount of debt issued by municipal governments within the limit of a certain percentage of assessed property valuation or a specific percent of government income. In most states, debt limitations are coupled with additional procedural restrictions such as a requirement to hold a referendum in order to issue new bonds. State-imposed fiscal rules often include overriding provisions that allow a municipal governing body to exceed the limits imposed so long as the legislature and/or voters approve.

Figure 1 shows the current status of the four different fiscal rules governing municipal governments as of 2017. The configuration of fiscal rules varies across states. For example, Colorado, as a well-known example of Taxpayer Bill of Rights passed in 1992, has all four different fiscal rules on municipal governments while Texas has tax limits only. These cross-state variations might be attributable to different intentions that states have on their fiscal controls and municipal budgets. One important question to ask is, do different sets of state-imposed fiscal restrictions generate varying budgetary outcomes at the municipal level? More importantly, does a certain combination of fiscal rules successfully result in its intended municipal fiscal outcomes? 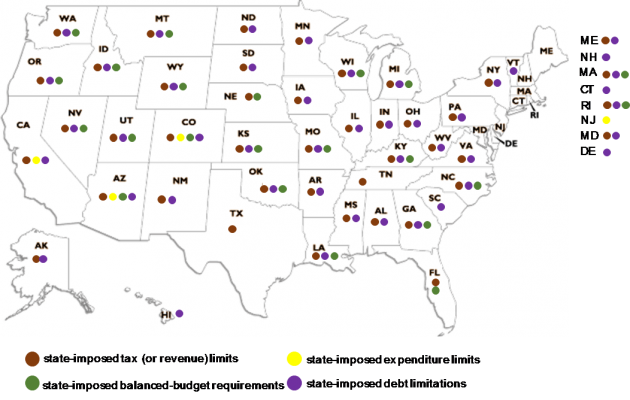 Source: Created by author based on a review of states’ constitutions and statutes

Recent evidence, based on my study of 659 American municipalities from 2006 to 2011, suggests that municipalities are likely to experience different fiscal outcomes when state-imposed fiscal rules constraining their budget decisions are differently composed. It shows even more intriguing findings: some sets of fiscal rules may lead to intended budgetary results while the other combinations of rules may not. Specifically, the evidence shows that more restrictions on municipal budgets – i.e., a stricter combination of fiscal rules – could end up with unintended consequences. 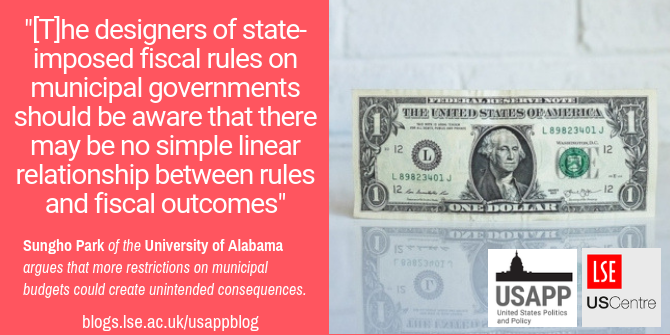 This may not be a surprise; over a decade ago, a group of political economists warned about unexpected consequences. Stricter control mechanisms tend to mean that decision makers are far less able to do what they wish to. Hence, when they face these rules, decision makers are encouraged to compare the total cost of obeying them with those of overriding behavior. If the latter outweighs the former, decision makers may be motivated to circumvent the control mechanisms that do not offer strong incentives to be followed. The final outcomes of the control mechanisms, therefore, could be unintended in this scenario. Recent evidence confirms this theoretical idea in the context of American municipal budgeting. 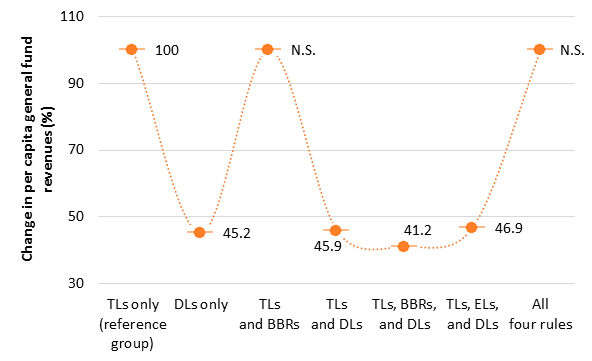 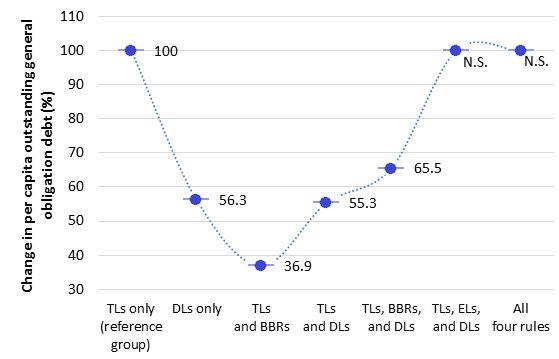 Some fluctuation also exists in municipal per capita general obligation debt depending on the configuration of fiscal rules. Figure 2 implies that while some combinations of fiscal rules may generate a lower level general obligation debt at the municipal level, the last two stricter forms of fiscal rules may not be successful in constraining municipal debt. According to these findings, again, more restrictions on municipal budget decisions could lead to unexpected outcomes. Perhaps decision makers are motivated to avoid the stringency of state controls by relying on overriding provisions that each fiscal rule often includes.

What do these findings tell us about municipal budgeting and state preemption activity? The institutional configuration of state-imposed fiscal rules matters for municipal fiscal outcomes. Thus, the designers of state-imposed fiscal rules on municipal governments should be aware that there may be no simple linear relationship between rules and fiscal outcomes. Instead, the result and outcome of fiscal controls could vary depending on their specific design.

If so, who are the designers of fiscal rules? History shows that everyone including politicians, administrators, interest groups and citizens could be the designer of fiscal institutions. In fact, business leaders in California made Proposition 13 listed on the ballot in 1978, and it was approved by voters. In Massachusetts in 1980, Proposition 2 was led by an interest group, and was also approved by voters. The Governor and legislative leaders in Nebraska are putting much energy toward local property tax relief. Therefore, as potential rule designers, we all need to keep in mind that only careful configuration of state preemption mechanisms, rather than simply adopting (or agreeing to adopt) more controls, can assure intended municipal budgetary outcomes.

Sungho Park – University of Alabama
Sungho Park is an assistant professor of Public Policy and Administration at the Department of Political Science, University of Alabama. His research interests are in public budgeting and finance and include state and local fiscal condition, fiscal rules and institutions, government accounting and financial reporting, budget reform, and economic development financing. His research has appeared in American Review of Public Administration, Public Budgeting and Finance, Public Finance and Management, Journal of Public Budgeting, Accounting and Financial Management, State and Local Government Review, Public Administration Quarterly, Public Policy and Administration, and other journals.