With the departure of another commissioner, the FEC’s main job now is shuffling paper

With the departure of another commissioner, the FEC’s main job now is shuffling paper

In August a member of the Federal Election Commission (FEC) resigned, paralyzing the ability of the independent agency which oversees US elections to do its job. Melissa M. Smith writes that the FEC has been dysfunctional for a long time: its enforcement actions have been largely slow and relatively toothless. And with the Republican Party in control of the US Senate, and President Trump’s seeming lack of interest in naming replacement commissioners, she writes that the FEC is likely to remain a paper tiger.

Let’s pretend that the US Federal Election Commission – the independent regulatory agency for US elections – is a local police station.

Now, imagine that this local police station, which has been experiencing a workforce crunch for several years, is now staffed to a bare minimum, and it can no longer go out and actively police crimes that are happening. The three remaining officers can process paperwork that has already been filed, and they can shake a finger and give stern warnings to potential law breakers, but everyone knows that they can’t patrol the streets and ensure law and order.

I think we can envision smiles on the faces of those who might decide to bend, if not break, the rules. While most of the people in our neighborhood will be nice and law abiding, there will be some who will take advantage of the situation because they know the likelihood of being caught has dropped dramatically. With a wink and a nod, they will cut corners and make promises, and have conversations that would otherwise be against the rules.

This is where the Federal Election Commission (FEC) actually finds itself right now, after its vice chairman, Matthew Petersen, left the commission at the end of August. Because the FEC is now down to only three members, it cannot achieve its needed quorum of four, meaning it cannot hold meetings, initiate audits, vote on enforcement matters, or issue advisory opinions. In short, it cannot do its job.

How did it reach this point? Oddly enough, it’s not the first time that the FEC has been in this position. In 2008, it actually got down to only two sitting members. The attempt to fill the vacant positions triggered a partisan battle in the Senate, which must approve the appointments, and the commission went six months without a quorum. Five vacancies were filled in June 2008 only after President George W. Bush reached a deal with the Senate to appoint new commissioners. In the meantime, it was basically a paper tiger, without any enforcement ability.

Now, 11 years later, we find ourselves in the same situation. The remaining commission members were among those appointed by President Bush, which means they are all beyond the end of their terms. There is no guarantee that they won’t also step down at some point, leaving the agency completely void of any members. President Donald Trump nominated one person to serve on the FEC two years ago, but so far not even a hearing has been held for that nominee.

Why does this keep happening? The Federal Election Commission was created in 1974 after Watergate to “disclose campaign finance information, to enforce the provisions of the law such as the limits and prohibitions on contributions, and to oversee the public funding of presidential elections.” When fully staffed, there are six members. No more than three of the members can be from one political party, and each member serves a six-year term, except for two seats that are subject to appointment every two years. It is easy to see that today’s members are far beyond those lengths of service.

The commission oversees campaign finance laws and requires financial documentation of all federal election campaigns. Those documents are scrutinized by employees at the FEC to spot potential violations, and the commission then votes on whether fines, audits, or advisory opinions should be instituted. It has for many years been dysfunctional, partially because of the strange hybrid makeup of the commission. Envisioned as a non-partisan group that would take an impartial look at federal campaign documents, it has instead become a victim of the type of gridlock that is seen in the US Congress. Members of the commission have in recent years approached campaign finance from opposing viewpoints. The Democrats on the commission are in favor of more transparency regarding financial donations and spending, while Republicans see such actions as a chilling of political speech. Democrats want change, but Republicans are happy with the existing system. 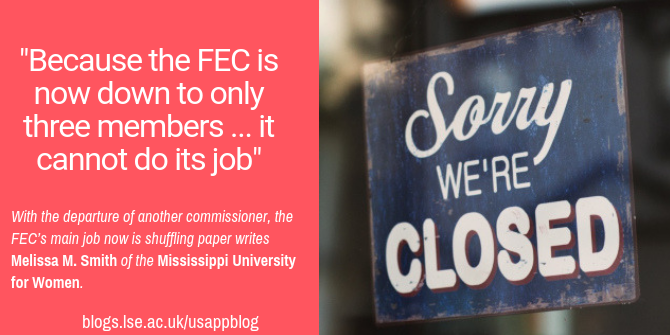 At the heart of any potential change is the US Senate, which has basically ignored the FEC for several years. In the time since Sen. Mitch McConnell (R-KY) became Senate Majority Leader, no movement has been taken to replace any members of the commission. McConnell has defended the rights of special interests to spend money in federal elections, and is a die-hard foe of overhauling the campaign finance system. In his own memoir, he notes that he would never have been able to win office if limits had been in place regulating what could be raised and spent. And this is the man who controls whether nominees come up for Senate hearings or votes.

To be honest, though, the FEC hasn’t been effective for a long time. The average fine for campaigns that break federal finance laws has been decreasing, and records show that cases take an average of more than 600 days to close, meaning that officials are elected — and often re-elected — before the FEC takes any action. Take the case of Sen. Martha McSally, a Republican from Arizona. FEC auditors found her House campaign in 2014 took in $319,000 more than allowed from 117 donors. They also found she did not properly disclose $33,000 from political action committees. She was eventually fined $23,000. However, the FEC did not settle this matter until 2019, after four election cycles, and after McSally herself had been elected to the US Senate. Five years is an excessive amount of time to pass before fines are levied for infractions, and this one seems more like a slap on the wrist than an actual penalty.

Of course, the other juggernaut in this mix is President Trump. He hasn’t indicated that the FEC is a high priority for his administration, and so far has only nominated one individual for the commission. Given that the remaining members are long overdue for replacement, Trump could decide to nominate an entirely new slate of appointments. While they cannot be from the same political party, he could nominate individuals who are Libertarians or independents, thereby possibly stacking the commission with those who oppose new campaign finance legislation. It is unclear if he understands — or cares — about leaving a legacy with the FEC, or if he might even be able to strike a deal with the Senate to get members appointed before the 2020 election.

A few members of Congress grumble about the FEC and talk about how important the issue is with Americans. This really isn’t borne out by polling, though. In a 2018 survey, the Pew Research Center found that 77 percent of the public says “there should be limits on the amount of money individuals and organizations” can spend on political campaigns. While that seems significant, it is also true that most Americans’ eyes glaze over when this topic gets discussed. It is simply not a sexy subject, and certainly not one that they deem more important than taxes, jobs, and the economy. If you ask people about this topic in a survey, they will probably say it is important. However, if you have them independently list the important issues in the upcoming federal elections, a far smaller percentage would name campaign finance overhaul as a pressing issue for the country. No, they don’t like that big donors have more influence over legislators, but they also aren’t all that interested in the intricacies of how to fix the problem. After all, that’s part of our elected officials’ jobs, right?

A poll in December 2016 by the Center for Public Integrity/IPSOS found that 90 percent of those polled believe wealthy people will figure out new ways to influence politics, even if campaign finance laws are changed. Perhaps this is the most telling finding of all — the incredible cynicism that Americans have for their political system and the possibility of shifting the balance of power away from large donors and SuperPACs.

Perhaps it is time to overhaul the FEC. Maybe suggestions to limit the number of commissioners to five have merit. After all, that might help avoid the numerous 3-3 votes that have hamstrung the commission in recent years. Of course, this opens up a Pandora’s Box about how to split the commissioners politically so that one party doesn’t have an advantage over another, including the idea to include one independent.

Given that the 2020 presidential campaigns are already underway and elected officials are loathe to make political missteps during a national campaign, the likelihood of any change happening seems miniscule. Until then, the cops can shuffle paper and make empty threats while reading campaign documents from several election cycles ago.

Melissa M. Smith – Mississippi University for Women
Melissa M. Smith is an Associate Professor and the Gibbons Chair of Journalism in the Department of Communication at Mississippi University for Women. Her research focuses on US elections, particularly campaign finance reform. Her work has appeared in several journals, and she is the co-author of two books, Campaign Finance Reform: The Political Shell Game, and Dark Money, Super PACs, and the 2012 Election, both published by Lexington Books.