Towns and cities in the US are often constrained by rules and regulations about how they can spend and raise money which have been made by the state to which they belong. In new research, Yu Shi, Nisa Aydemir and Yonghong Wu look at how various state-level policies such as fiscal decentralization and tax and expenditure limits affect which revenue tools are used by cities.

Although we generally think of towns and cities in the US as being self-governing, the decisions policy-makers in these jurisdictions can make are often limited by state governments’ rules and other local factors. These limits also often apply to municipalities’ ability to raise money or to reduce the amount that they spend. And state governments often vary in the extent to which they limit local governments’ ability to generate revenue, share spending responsibilities, and distribute intergovernmental grants. All these factors result in a unique policy-making environment for each municipality.

Using a sample of one hundred large American cities, we show that a combination of state aid, state-imposed local tax and expenditure limits (TELs), fiscal decentralization, and tax authority affect whether policies to get budgets under control are adopted.

In most US cities, new fiscal policies – usually concerned with raising revenue or reducing spending to meet changing conditions – should be approved by the city council or the public. In our research, we investigated the impact of several local and intergovernmental factors on the adoption of several major fiscal policies: property and other tax increases (including sales and income taxes); property fee and road user charge increases; and personnel cuts (the only category made up solely of spending reductions).

How do states influence which fiscal policies cities adopt?

Our analyses of 100 large US cities show that states can influence cities’ adoption of these fiscal policies through state aid, state-imposed local tax and expenditure limits, tax authority, and the decentralization of fiscal responsibility.

Municipalities receive financial assistance from state governments in the form of intergovernmental revenue. This aid is an important revenue source for municipalities and may help local governments reduce and avoid fiscal pressure. When cities receive more state aid, the likelihood that they will raise property taxes and adopt fees and user charges becomes smaller. Thus, financial assistance from higher levels of government reduces a city’s reliance on its own revenues.

Local tax and expenditure limits (TELs) – which are fiscal institutions that are beyond the control of municipalities – are imposed by the state governments to restrain the fiscal choices of a city government. They limit a city’s ability to tweak local property taxes and restrict a city’s ability to respond to new challenges by raising revenues. Our findings confirm that local TELs are an important factor in restricting a city’s fiscal policy choices because they stop cities from adopting property tax increases. Cities facing more restrictive local TELs are less likely to adopt property tax increases and/or raise revenues than cities with less restrictive TELs, all else being equal. Yet, it is noteworthy that local TELs have no significant effect on the adoption of other types of fiscal policies, such as other taxes, fees and user charges, and personnel cuts. 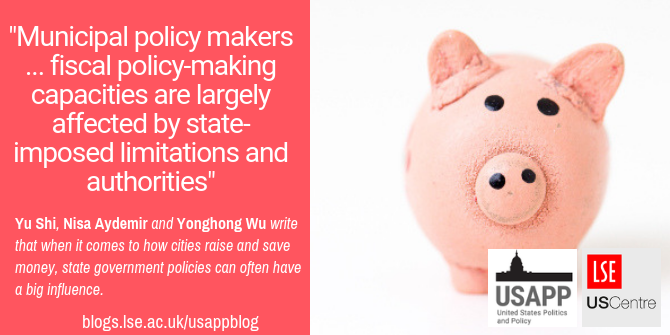 Photo by Fabian Blank on Unsplash

Tax authority is defined in terms of a city’s access to local broad-based taxes (i.e., property tax, general sales tax, and income tax). Cities that are authorized by their state to collect revenues from these taxes may choose not to impose them. Like local TELs, tax authority is an institutional control which can restrict local access to general taxes and limit the fiscal independence of a city’s government. Our research suggests that cities with broader tax authority are more likely to adopt tax other than property taxes. It makes sense that cities with less restrictive access to broad-based taxes are more likely to raise additional revenues from general sales taxes and/or individual income taxes. Yet, our results do not show any significant effects of tax authority on other types of municipal fiscal policies.

Finally, in a fiscally decentralized system, states may delegate a high degree of discretion or authority to local governments over their fiscal structure, service functions, fiscal responsibilities, and other financial decision-making powers which can be used to solve their own problems. Our results show that cities in more fiscally decentralized states have more flexibility and autonomy to increase property tax and nontax revenues or to cut personnel than cities in less fiscally decentralized states. Nevertheless, fiscal decentralization is negatively associated with the use of other taxes like sales, income and energy taxes. Therefore, fiscal decentralization, as one important aspect of the relationship between the city and the state, could expand a city’s fiscal autonomy and mean that it is more likely to adopt certain revenue policies.

Municipal governments are creatures of the states to which they belong. Given that municipal policy makers operate within a confined decision-making environment, their fiscal policy-making capacities are largely affected by state-imposed limitations and authorities as well as local context. Cities may adjust to a new and changing environment by revising some of the prior policies or adopting new ones within the confines of their policy settings. Our findings suggest that the combination of state aid, local tax and expenditure limits, tax authority, and fiscal decentralization can create state-shaped fiscal policy environments that can have important effects on how cities make choices about their own fiscal policies.

Yu Shi – University of North Texas
Yu Shi is an assistant professor in the Department of Public Administration at the University of North Texas. She specializes in state and local government fiscal health, fiscal federalism, municipal fiscal policies, and local government autonomy. She has published articles in Publius, Urban Affairs Review, and International Journal of Public Administration.

Nisa Yazici Aydemir –– Middle Eastern Technical University
Nisa Yazici Aydemir is an adjunct instructor in the Department of Political Science and Public Administration at Middle Eastern Technical University in Turkey. Her research focuses on local fiscal policy-making process, information use and decision-making in government, public performance management and science and technology policies. She has published in State and Local Government Review.

Yonghong Wu – University of Illinois at Chicago
Yonghong Wu is an Associate Professor in the Department of Public Administration at the University of Illinois at Chicago. Dr. Wu’s recent research has focused on state and local fiscal policy-making, public finance, and government funding of academic research. He has recently published articles in Local Government Studies, Public Budgeting & Finance, and Science and Public Policy.