Public transit managers in America’s towns and cities often face pressure to outsource transport services because of the potential to bring cost savings. But, evidence suggests that these cost-savings rarely occur. In new research which surveys transit managers, Olga Smirnova and Suzanne Leland investigate why contracting-out remains popular despite this apparent lack of cost-savings. They find that managers of already contracted-out bus transit services feel that the practice reduces risks and improves service quality.

The debate over whether contracting out for public transit services brings in cost savings have been going on for some time. From the 1980s, the New Public Management school of thought stressed the importance of decentralization and contracting out to achieve cost-savings and superior performance in public organizations. The idea is that the competition experienced, for example, from contracting out will bring cost-savings and better performance. The empirical evidence, however, does not show that there are cost savings from contracting out in the transit industry. Despite this lack of cost-savings, contracting out continues industrywide.  Political actors influence contracting out decisions, especially elected officials and transit agency managers, including the writing of contracts and monitoring of contracts for efficiency gains. In recent research, we conducted a unique bi-annual survey of transit managers since 2009. Our survey highlights how managerial perceptions may explain the reasoning behind the persistent trend to contract out services in the industry. There are stark differences in the perception of the benefits of contracting out between the managers from agencies that contract out and those that do not contract out.

Earlier studies found increased efficiencies from contracting out but were often based on single case studies. As more data has become available, researchers conducted more quantitative studies and did not find such savings. This may be due to savings accruing to certain types of organizations and not to others. The factors that did identify some efficiency gains were if the agency engages in: monitoring and management of contracts as well as creating certain benchmarks for performance, such as leaving a small portion of service in-house. But more work needs to be done in this area.

How do transit managers perceive contracting out?

Our survey focuses on understanding the perceptions of contracting out from the agencies that currently contract out or provide their operations in-house. The agencies that provide their operations in-house may have previous experience with contracting out or may have certain portions of their operations contracted out. The agencies that contracted out may not have capacity to bring the operations back in-house or to provide state-mandated services in-house. The perceptions of managers are important as they may manifest their past experiences with in-house operations or contracting out as well as their self-fulfilling prophecies regarding any changes in the provision of services. Overall local government managers are usually more concerned with efficiency and data-driven decisions than politics and ideology; hence their perceptions may be more reflective of their experiences. Elected officials’ perceptions, however, may inform their need and demand for the pressure to contract out despite the evidence.

Our 2017 survey findings focused on the role of politicians, the underlining perceptions of contracting out, and important components for generating cost-savings such as having multiple contracts and monitoring contracts. 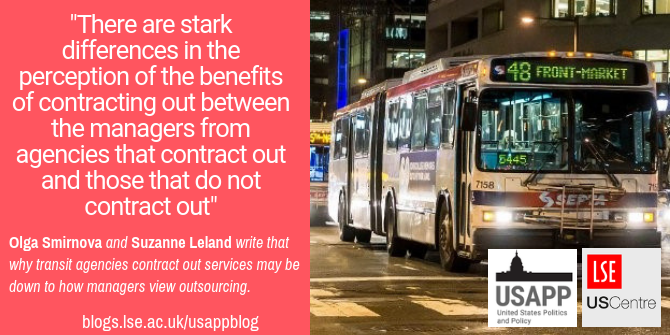 Managers’ perceptions are also important, and there are differences between managers from agencies that contract out and those agencies that keep their operations in-house. For example, contracting out sometimes is perceived as reducing risks. Indeed, 64 percent of managers who contract out agree or strongly agree with this statement, while 67 percent of managers who oversee agencies that operate in-house disagree and strongly disagree with this statement. Figure 1 below shows these stark differences. 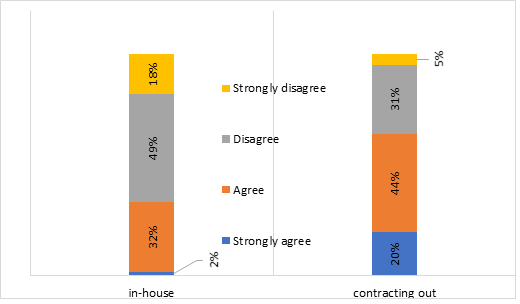 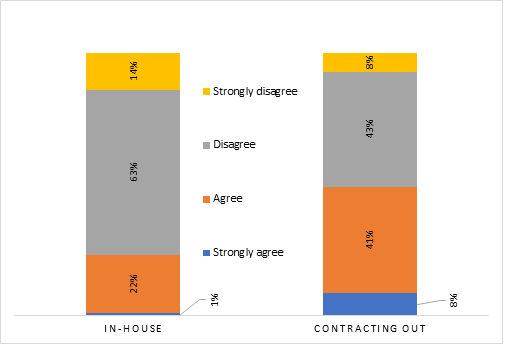 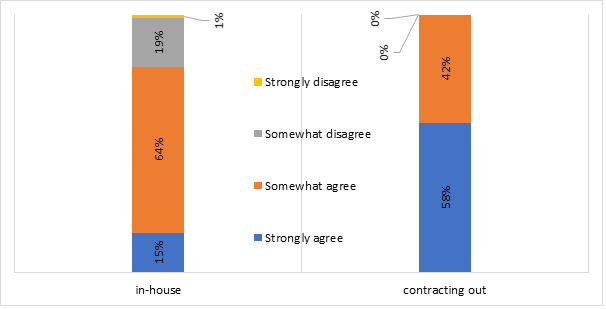 One shortcoming of our survey is it does not allow us to disentangle whether these differences between in-house and contracting out agencies may be due to environmental factors that make the bidding process easier in some places due to the number of potential bidding competitors compared to other locations.

Since competition plays a very important role in delivering cost-savings and efficiency gains, we specifically looked at the number of contracts agencies operate. Operating multiple contracts at the same time may provide necessary benchmarks as well as extra experience that agencies get from contracting out. About 43 percent of agencies have only one contract, another 50 percent have anywhere between 2 (19 percent) and 12 (1 percent) contracts. About 2 percent of agencies operate 250-300 contracts at a time. At the same time, managers’ estimates indicate about 13 percent of vendors have hundreds of contracts at one time and another 12 percent had between 100 and 250 contracts. Only 18 percent of vendors have only one contract at a time. Having larger number of contracts provides vendors with the ability to gain more experience with contracting out.

The importance of contract monitoring

Another factor underscored in the academic literature as important for contracting efficiency is monitoring. The majority (85 percent) of contracting out managers employ at least two different methods of monitoring contracted services. At least a third (34 percent) employed four different methods at the same time: customer satisfaction surveys, monitoring the level of service provision, monitoring complaints, and using secret shoppers. Monitoring levels of service provision (used by 82 percent of agencies) and monitoring complaints (used by 80 percent of agencies) are the two most frequently used monitoring methods. In fact, 71 percent of all agencies use both methods together, sometimes in combination with other monitoring ways.

What can we conclude from the results of our study? First, there are differences in perceptions about contracting out between those managers who currently contract out and those who oversee operations in-house. This may be due to the fact that they experience different environmental and competitive characteristics. Future research needs to further explore these factors. It is also possible that in-house managers have or see little to no competition in the wider market to lower the cost of the provision of services to improve efficiency gains from the contracting out. Second, the monitoring of contracts really matters, and in fact the overwhelming majority of contracting out agencies in our study employed at least two different methods. In fact, our work shows an increased level of monitoring compared to previous studies which is encouraging and may indicate a path to more transparency and better performance in the future.

Olga Smirnova – East Carolina University
Olga Smirnova, Ph.D., is an Associate Professor for the MPA program, in the Department of Political Science, East Carolina University. Her research interests include green transportation innovations, contracting out, program evaluation, economic development, and performance measurement. Her research appeared in Public Administration Review, Administration and Society, Industrial Relations Journal, and American Behavioral Scientist to name a few. She edited Building a Sustainable Transportation Infrastructure for Long-term Economic Growth, which focuses on the ways infrastructure can be financed to be sustainable and contribute to long term economic growth.