This week, the Speaker of the US House of Representatives, Nancy Pelosi, announced that House Democrats would launch a formal impeachment inquiry into President Donald Trump, following allegations that he pressured the President of Ukraine to investigate potential Democratic 2020 candidate, Joe Biden. US Centre Director, Professor Peter Trubowitz, looks at why Pelosi has made this decision after resisting doing so for months, and what we can expect to happen next.

Why has Speaker Pelosi now called for an impeachment inquiry after resisting doing so for months?

The short answer is that most of her caucus, including moderate Democrats, now favor impeachment in light of the recent revelations about Trump’s efforts to pressure the Ukrainian president to investigate a potential 2020 campaign rival Joe Biden and his family. This has forced Pelosi to recalculate and I think she reluctantly concluded that she had no choice but to formally launch an impeachment inquiry. 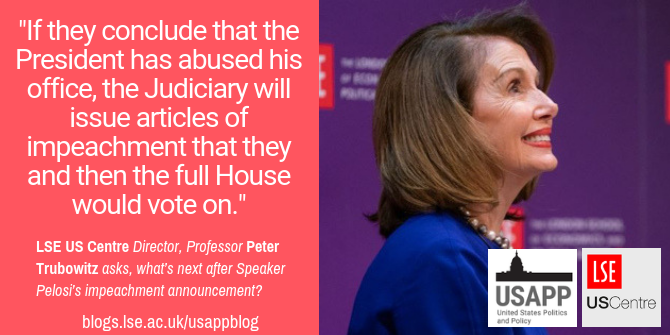 Why do you say Pelosi has “reluctantly” decided to make this move?

She and many other Democrats are convinced that they can beat Donald Trump and the Republicans in 2020 on the issues Americans care about (health care, college tuition, prescription drugs), and they can point to a lot of polling evidence in their favor. Impeachment potentially allows Trump to reframe the 2020 election in naked partisan political terms as a Democratic “witch hunt.”

Could this backfire and come back to haunt the Democrats?

Yes. It is worth remembering that Republicans paid a steep political price in the 1998 midterm elections after they impeached Bill Clinton (the charges were defeated in the Senate). The same could happen to the Democrats next year at the polls. At the same time, not responding to the President’s brazen misuse of presidential power could hurt Democrats with their political base.

What should we expect next?

What Pelosi has done is formally endorse the informal impeachment inquiry already underway in six of the House’s committees: Judiciary, Intelligence, Oversight, Ways and Means, Financial Services, and Foreign Affairs. If they conclude that the President has abused his office, the Judiciary will issue articles of impeachment that they and then the full House would vote on. Assuming it passed both the committee and the full House, the case would then go to the Senate for trial. Following the trial, the Senate would need the approval of a 2/3 majority, or 67 votes, to remove President Trump from office.