There is widespread belief that interest groups such as gun rights associations, unions, and environmental lobby groups have significant influence on US politics. But, writes Sarah F. Anzia, because of a close research focus on the federal level, there is actually little evidence that this is the case. She writes that studying groups’ influence in relation to local and state governments would give a much better picture of just how much influence interest groups actually have.

Consider US local governments—the tens of thousands of municipalities, counties, school districts, and special districts that provide essential public services. We don’t even really know how active interest groups are in such places or which are involved. We also don’t have any theories to help answer those questions, because studies of interest groups in Washington, DC, mostly just describe the kinds of groups that lobby in the nation’s capital. Studying subnational government would force researchers to think through some of these basic questions, such as when and where we should expect interest groups to be active in politics in general.

Why we need to study interest groups beyond the Beltway 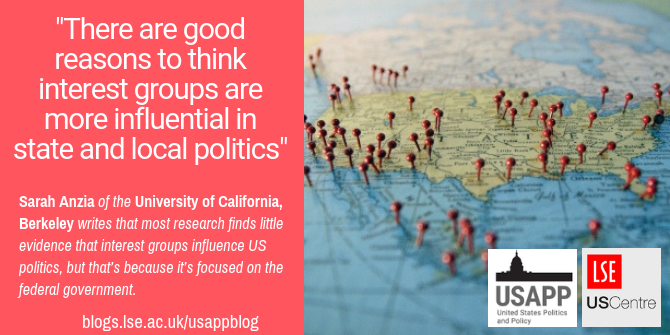 Why it’s hard to measure influence at the national level

There are also research design problems associated with looking at a single government for signs of influence. Interest groups want favorable public policy, so that’s where to look for the fingerprints of their influence. Yet at any given point in time, public policy in the federal government is fixed. This causes problems for social scientists who rely on variation to study the effect of one thing on something else. Researchers have devised two workarounds to deal with this problem: they either look at variation in policymakers’ positions on issues, or they make comparisons across issues. But both can be problematic for evaluating interest group influence.

First, analyzing policymakers’ positions, such as their roll call votes, is not the same as analyzing actual policy outcomes. Public policy outcomes are shaped not just by the actions policymakers take but also by the actions they do not take. Many policy proposals don’t even get considered, often because powerful interest groups block them. So by examining roll-call votes for signs of interest group influence, researchers are studying the small set of issues that are being acted upon, and many of them are probably being acted upon because they face less interest group opposition.

A second common approach is to compare across different issues in the federal government. This is tricky too, however, because no one can say whether auto emissions standards, for example, are friendlier to interest groups than rules restricting abortions. The two issues aren’t comparable. So the researcher’s strategy is to instead study policy change: for each issue, she asks whether policy changed or the status quo persisted, she codes what each interest group wanted (change or status quo), and then she tests whether more active groups are more likely to get what they want, across a large number of groups and issues.

By examining state and local politics instead, we don’t have to compare across issues or look at roll-call votes. The states each have a different set of policies on abortion and auto emissions. Local governments have thousands of different law enforcement policies and education policies. If we can measure that policy variation, and measure variation in interest group activity across states and localities, we can evaluate whether they’re related. We’d be far less likely to underestimate influence, because the outcomes we’d be studying would reflect all of interest groups’ success—both the enacting and the blocking.

Some researchers have begun to take this approach, and their studies do uncover evidence of interest group influence. So why haven’t more researchers ventured out into this territory? The main challenge, as with almost all work on subnational government, is data availability. Oftentimes this kind of work requires the collection of entirely new data—both on interest group activity and public policy. But that is both a challenge and an opportunity. And given the potential for subnational research to revive the study of interest group influence, it is a challenge well worth taking on.