During his 2016 election campaign and thereafter, Donald Trump criticized Latino judges, a distinct break from previous administrations which have increased diversity in the federal judiciary. But Latino judges may be beneficial to Trump’s Republican agenda. In new research, Scott Hofer and Jason Casellas look at the ideology of Democratic and Republican-appointed judges, finding that Latino judges from both groups tend to issue more conservative opinions than their non-Latino counterparts.

Throughout the 2016 presidential campaign, Donald Trump rallied his political base by promising to build a wall with Mexico and restrict immigration. He drew mild criticism from Republicans, except for comments he made about the presiding judge in the class-action lawsuit against his university (over fraud allegations). Trump drew condemnation for denigrating the decisions of Judge Gonzalo Curiel, by saying in an interview, in part,

Let me just tell you, I’ve had horrible rulings, I’ve been treated very unfairly by this judge. Now, this judge is of Mexican heritage.

President Trump’s comments about Curiel were not the only break from previous administrations in that it has reversed a bipartisan trend of increasing diversity on the federal judiciary; in fact, Trump’s nominations to the district courts are the least racially and ethnically diverse since the Ford administration. Trump’s tenure has seen a decrease of Latinos in the judiciary. This may be counterproductive as evidence suggests that Latino judges decide cases more conservatively than other judges in their party. Trump’s political goal of a more conservative judiciary may be undermined by his selection of primarily White Republican judges; meanwhile, the lack of diversity has brought negative attention from the media.

Latinos on the Federal District Court

Since the Kennedy Administration, every president has increased the number of Latinos on the district courts in their first terms, but that streak will likely end in 2020 as President Trump’s judicial appointments have been below replacement levels for retiring Latino judges. From 1961-2018, Democrats appointed 64 Latino jurists while Republicans appointed 49 Latino jurists. In 2016, Latino judges accounted for 56 of the 678 positions at the district level. They make up 8.3 percent of the judiciary, as opposed to 18 percent of the US population. Figure 1 illustrates diversity trends over time, the dashed line represents the total number of Latino judges by the end of each presidential term and the bars represent the number of Latino judges confirmed during each presidential term. 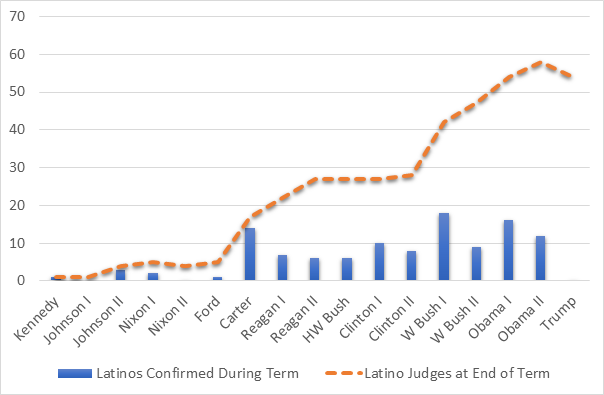 The federal judiciary in the United States has three major levels, the district courts serve as trial courts and are more localized. There are 678 district judgeships, scattered throughout the country which serve as the first line of the federal judiciary. Cases decided at the district level can be appealed to the federal appellate courts and a small subset even make their way to the Supreme Court. The structure of the federal judiciary and the appointment process provides an opportunity for political actors to take advantage of lifetime tenure by appointing judges who share their political ideology. Once confirmed, judges are free to follow their own course with almost no threat of removal from their position.

While Latinos are not a monolithic group, they share commonalities in terms of ethnicity, language, religion, and socio-economic background. That Latino jurists tend to be more conservative than others in their party isn’t surprising. This reflects trends in Latino public opinion, and for Republicans, the necessity to prove conservative bona fides to get appointed. Compared to other non-minority Democrats, Latino views on social issues are decidedly more conservative. 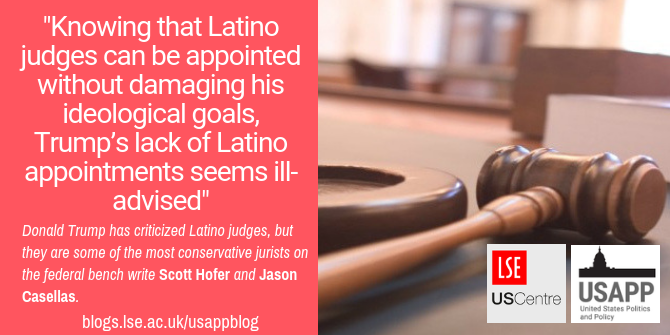 “Courtroom One Gavel” by Joe Gratz is Public Domain.

Latinos occupy a middle ground between White and Black Americans on many policy issues. For example, 47 percent of Latinos favor the death penalty, which is lower than the 59 percent of whites that do, but still higher than the 36 percent support in the black community. Most Latinos identify as Democrats, but their attachment to the party is not as strong. In 2016 that 24 percent of Latino respondents identified or leaned Republican, while 64 percent leaned or identified Democratic. Ideology and partisanship are not as strongly correlated for Latinos.

To see how judges differ in their decision-making, we use a statistical package that predicts case outcomes based on historical patterns. Figures 2, 3 and 4 show the average likelihood of a case having a liberal outcome (marked by the dot) and black lines represent a range of potential values for the average. We created predicted outcomes for all cases, then limited our analysis to only civil liberties cases and finally present findings for criminal justice cases before the court. 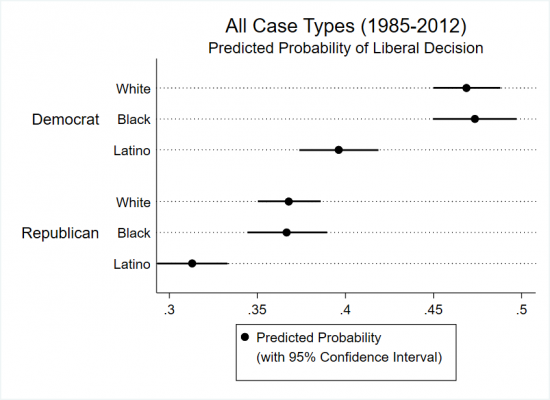 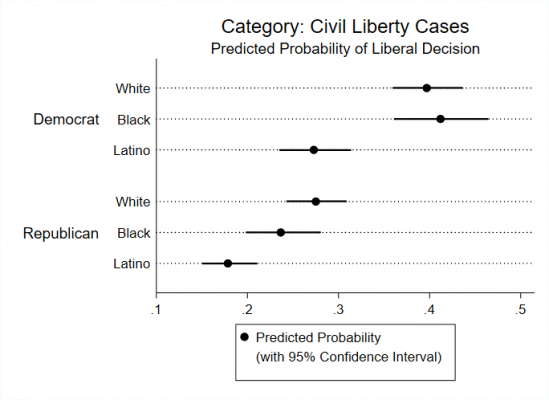 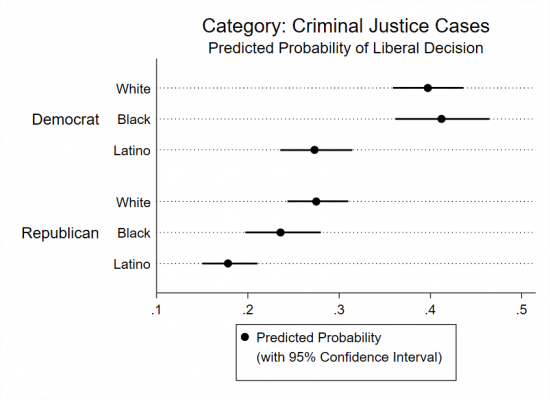 Republican and Democratic Latino judges tend to issue more conservative opinions than their non-Latino counterparts. Latino Democratic judges behave more like Republicans than Democrats. This may be the result of an increased priority among Democrats to promote well-qualified candidates from underrepresented groups or the selection pool of Latinos who identify with the Democratic Party, but not necessarily liberal ideology. The trend of Black and Latino Republicans producing some of the most conservative predicted outcomes may point to a trend among Republicans to value diversity to the extent it does not come at the expense of ideology. While the nation’s Latino population has substantially increased, the appointment of Latinos to the federal bench remains disproportionately low. Knowing that Latino judges can be appointed without damaging his ideological goals, Trump’s lack of Latino appointments seems ill-advised and exacerbates the current underrepresentation of Latinos in the judiciary.

Jason Casellas—University of Houston
Professor Casellas specializes in American politics, with specific research and teaching interests in Latino politics, legislative politics, and state and local politics. He is the author of Latino Representation in State Houses and Congress (New York: Cambridge University Press.) He is the recipient of numerous fellowships and awards, including a Princeton Fellowship, an American Political Science Association Fellowship, a Ford Motor Company Fellowship, the Samuel DuBois Cook Postdoctoral Fellowship at Duke University, and a United States Studies Centre Postdoctoral Fellowship at the University of Sydney.