The last two decades have seen a marked drop in local television news viewership with national – and often ideologically polarized – outlets gaining viewers. In new research, Gregory J. Martin and Joshua McCrain look at how the supply of news has changed the way we watch. Analyzing over 7 million news segments across over 700 stations, they find that those acquired by Sinclair Broadcast Group saw a 25 percent rise in national news coverage alongside a shift to the ideological right in their coverage. They write that these findings have important implications for the Federal Communication Commission’s hands-off approach to media market consolidation.

The American news media landscape – much like the American political landscape in general – has become increasingly nationalized and ideologically polarized over the past two decades. A handful of large national papers are growing readership and expanding their coverage, while nearly 1800 local newspapers have closed since 2004 (The Expanding News Desert). On television, the trends are less steep but point in the same direction: local news viewership is in slow decline, while ideologically polarized national cable TV outlets gain viewers.

It’s possible that these trends simply reflect adaptation by the news industry to changes in Americans’ tastes for political information. In an age of increasing nationalization of elections, dedicated coverage of local politics may no longer be as valuable to citizens as it once was.

Our research investigated an alternative explanation: that these content shifts are driven not by outlets giving consumers what they want, but by changes on the supply side of the news market. The media industry experienced a wave of ownership consolidation that began in the 1980s but reached a crest in recent years. This consolidation trend was especially stark on television: by 2017, just five companies owned nearly 40 percent of full-power broadcast TV stations in the US.

We examined the consequences of an acquisition by the largest of these companies, the Sinclair Broadcast Group. In the summer of 2017, Sinclair purchased 14 local television stations previously owned by the Bonten Group. We examined what happened to the content and viewership of the local news broadcasts on these stations, and their competitors in the same media markets, before and after the acquisition. To do this, we collected a database of roughly 7.4 million transcript segments from local news programs across the country, along with information about local news viewership at 743 local stations. 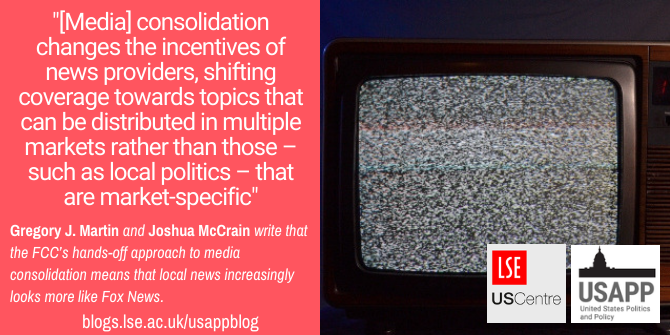 “Dead Air” by smokeghost is licensed under CC BY NC SA 2.0

We found that the acquisition led to a roughly 25 percent increase in the share of news programming devoted to coverage of national politics at the acquired stations. This increase came largely at the expense of coverage of local politics, which declined by a similar amount. We also found that a measure of ideological “slant” based on the content of news segments shifted to the right at Sinclair-acquired stations following the acquisition, compared to other stations in the same market. Following the acquisition, news programs on Sinclair-owned stations looked more like Fox News and less like MSNBC than they had before.

Viewers’ reaction to these changes was negative: Sinclair-acquired stations experienced a small drop in viewership following the acquisition. The shifts toward a righter leaning slant and more national politics coverage do not appear to have gained these stations additional viewers. It is thus hard to explain the changes in content that Sinclair implemented as being primarily driven by a desire to cater to viewer tastes.

Why did Sinclair implement these changes in content, if not to increase viewership and thereby its ad revenues? We posit an explanation driven by economies of scale in the production of news by a conglomerate owner. An owner of many stations operating in many markets like Sinclair can reduce production costs, perhaps dramatically, by substituting nationally-focused and ideologically unified content produced in a single studio for locally-focused and ideologically diverse content produced by many local journalists. Even if viewers don’t like this change – and they appear not to – the cost savings could still dominate in Sinclair’s thinking.

Media consolidation is therefore not neutral with respect to the content of news coverage. Consolidation changes the incentives of news providers, shifting coverage towards topics that can be distributed in multiple markets rather than those – such as local politics – that are market-specific.

Our results have strong implications for the regulatory oversight of mergers in the TV industry. One factor enabling Sinclair’s rapid recent expansion was the Federal Communication Commission’s (FCC) elimination of the “main studio rule”, which required local news stations to maintain a physical studio in the broadcast area. The elimination of this rule increased the cost efficiencies of consolidation, encouraging a wave of mergers. Our findings document a cost of the current hands-off approach to cross-market consolidation.

Regulatory oversight has traditionally focused on measures of concentration defined at the local market level; for example, the FCC caps the fraction of stations in a single market that can be owned by the same company. Our analysis shows that such market-level concentration analysis is insufficient: the news content that would be provided by a TV industry consisting of a handful of national conglomerates would look very different than that provided by one comprising numerous single-market operators, even holding measures of market-level concentration fixed.

Given the importance of local news provision for the accountability of local elected officials, regulators should not neglect this effect of cross-market ownership consolidation on local news content. Current trends towards national consolidation in TV and other media ownership have worrying implications for the performance of local governments and for mass polarization.

Joshua McCrain – Emory University
Joshua McCrain is graduate student in the Department of Political Science at Emory University. His research focuses on lobbying, Congress, media and politics and political methodology. He is particularly interested in congressional staff, the revolving door, and the influence of private interests in public policy.