Michael Bloomberg is eyeing the White House: Here are the strengths – and weaknesses – of his candidacy.

Michael Bloomberg is eyeing the White House: Here are the strengths – and weaknesses – of his candidacy.

Michael Bloomberg has enjoyed a storied career in business, politics, and philanthropy. Will he soon call the White House home? Amid an already jam-packed field of Democratic presidential candidates, the billionaire businessman and former New York City mayor has indicated that he’s considering a run for the nation’s highest office. Thomas Gift discusses the strengths and weaknesses of a would-be candidate Bloomberg.

Last week, Michael Bloomberg filed to run in Alabama’s Democratic primary election next year, fueling speculation that he is preparing for a White House run. Bloomberg has two attributes that enable him to run for president at the eleventh hour: “more money than God” and a household name. The business mogul and former New York City mayor wouldn’t join the Democratic primaries if he didn’t think he could win. But is he right? Here’s a run-down of some strengths and weaknesses of a would-be candidate Bloomberg: 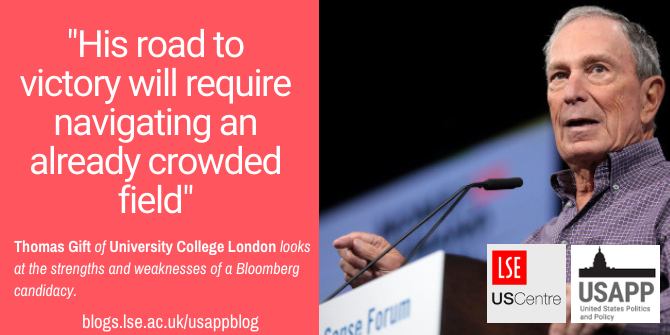 “Michael Bloomberg” by Gage Skidmore is licensed under CC BY SA 2.0

The Bottom Line to a Bloomberg candidacy

If he can earn the Democratic nomination, Bloomberg would be a formidable opponent for Donald Trump. Yet his road to victory will require navigating an already crowded field, including a surging Warren. He also risks splitting the moderate vote with Biden. Despite being a 1 percenter, a former Republican, and a late entrant, it’s not impossible that Bloomberg can win the nomination. But it’s a long road between now and the 2020 Democratic National Convention.