Though still a relatively small group, Libertarians have had a growing political presence in the US in recent decades. Olivier Lewis and Jeffrey Michels write that while the Republican Party has historically been closely aligned with libertarians, George W. Bush-era curtailments on civil liberties and the rise of Donald Trump has pushed the movement away from that traditional alliance. With both Trump and the Democrats alike becoming more supportive of big government ahead of the 2020 election, libertarians will need to decide how best to use their votes so that their views are not squeezed out.

True or not, the US libertarian movement is known better for wielding its influence behind the scenes via interest groups and corporate donors rather than on the campaign trail. But with Republican and Democratic parties simultaneously shifting away from small-government values, the way may be open for libertarians to stand up for themselves in the upcoming presidential elections. As a large bloc in a tight race, their protest votes could paradoxically put them in the position of kingmaker.

Estimated to make up at least 10 percent of the population, libertarian-minded Americans have long posed an immense potential as swing voters – at least in principle. Their political views – which are centred around the idea of personal autonomy – though now rather mainstream, have never fit cleanly in the programs of the two main parties. Socially liberal (for instance with regards to marriage and drug use), they could stand to gain from the Democrats, while their fiscal conservatism brings them closer to the Republicans. Meanwhile the movement’s underlying philosophy, championing the free-acting individual who spurns irrational bonds in the pursuit of self-interest, would hold libertarians to be the quintessential swing voters, ready to align with either side depending on which is willing to offer more at any given moment. But we argue that libertarians were never so detached. In fact, it is nearly impossible to speak of them as a bloc, most having been captured by a mainstream party and lacking their own through which to assert their public identity. But could this now be changing?

1972-2016: The rise and fall of libertarianism in the Republican Party

Historically, the Republican Party (GOP) has monopolised the libertarian vote, mainly with its promise of fiscal conservatism. Amid growing aversion to post-war welfare programs championed by the Democratic Party, the GOP cobbled together an unlikely consensus uniting small-government libertarians with religious conservatives and foreign policy ‘hawks.’ This alliance seemed to offer libertarians more than going it alone with the Libertarian Party, founded in 1971. In the 1980s, for instance, President Reagan’s rhetoric – seeped with the pathos of the enterprising American individual – helped elevate libertarian doctrine to the status of a public norm. This norm then became biting policy in the 1990s, as the Republican Party proved famously intransigent on budgetary questions. It seemed like libertarian hardliners had won the upper hand not only in the Republican Party, but in US politics writ large.

The libertarian alliance with conservatives weakened in the 2000s, with the Republican Party back in the White House. Many libertarians, including some Fox News hosts, turned against President George W. Bush in the wake of the September 11 attacks, as he expanded military engagement abroad and curtailed civil liberties ‘at home’. In the 2006 midterms a significant number of Libertarian voters allegedly voted for Democratic candidates. But the rise of Barack Obama – who promised healthcare reform that recalled the era of robust government welfare programs and later bolstered the surveillance capabilities of the National Security Agency – brought this dalliance with the Democratic Party to an end. Libertarian dissatisfaction with the Republican Party did not therefore give way to a rapprochement with the Democratic Party. But neither did it result in a turn towards the Libertarian Party, whose presidential candidate, in the form of former Georgia Congressman Bob Barr, still failed to reach the one-percent mark. 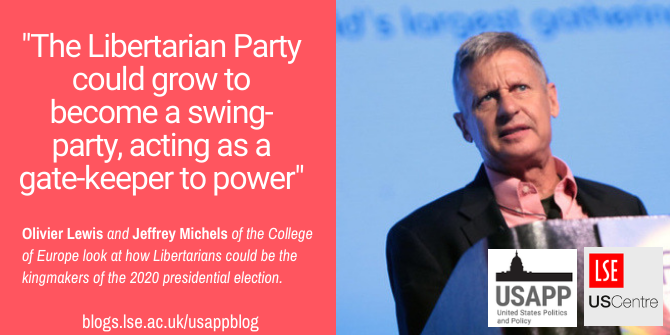 “Gary Johnson” by Gage Skidmore is licensed under CC BY SA 2.0

Instead, libertarians sought to regain the upper hand within the Republican Party. And for a brief period, they were succeeding. The 2010s were promising to become “the libertarian moment”. While doctrinal libertarians, such as Texas US House Representative Ron Paul, were vying for the Republican presidential ticket and mobilising young activists, the grassroots ‘Tea Party’ movement energised the GOP with politicians who seemed singularly dedicated to reducing the scope of government. But the libertarian decade ended abruptly when its partisans were outflanked by another disaffected group of Republicans: non-urban, working-class, white voters. This large segment of the US population was galvanized by Donald J. Trump and elected him in the 2016 presidential election.

The Libertarian Party: A Last Bastion for Fiscal Conservatism?

Trump’s presidency is laying bare the Republican Party’s tenuous claim to represent libertarian values. Even before Trump, the Republican Party’s fiscal record was hardly disciplined: at the state level, for example, over the past 30 years Republicans took control of two dozen states, and over this period median spending, adjusted for inflation, doubled. Today, much to the discomfort of libertarians, a large portion of Republican voters explicitly welcome a larger and more active government, one that increases public spending, raises tariffs, erects fences, and creates international ‘coalitions of the illiberal’.

Republicans close to the libertarian movement are therefore among the very few pushing back against the GOP’s new statist platform. For instance, Bill Weld, who ran as Vice President on the Libertarian Party ticket in 2016, returned to the Republican fold to challenge Trump in upcoming primaries. But resistance may have to come from the outside. Consider the fate of Justin Amash, renowned for his principled libertarianism. In 2015, Amash co-founded the House Caucus for Freedom to check GOP leadership and guarantee libertarian values from within, and later known for “shutting down the government over budget fights”. When Amash read the Mueller report and supported an impeachment procedure against Trump, members of the Freedom Caucus voted unanimously to dismiss him.

Policy-wise, the Democratic Party and libertarians could work together to promote causes like privacy, gay rights, free trade, a more welcoming immigration policy, and the legalisation of recreational drugs. But with Democrats on the cusp of selecting a big-government candidate, libertarian voters are likely to keep their distance. While a centrist like Joe Biden would likely garner a strong share of libertarian votes as ‘the lesser of two evils,’ a more radical candidate, such as Elizabeth Warren, would leave libertarians a choice between two economically interventionist candidates. In other words, “you may end up with a Republican and a Democratic nominee, [who] are both opposed to the libertarian position”.

Small Parties: The last of the ideologues

Is it possible that the US will witness the same trend that has swept continental Europe, where mainstream party systems have fallen apart? With a record showing, the Libertarian Party could resemble those smaller parties in Europe that have won over voters with their clearer ideological stances and position apart from “politics as usual.” These have had an increasing sway over their larger rivals, who have either had to mimic their demands to win back votes or welcome them into increasingly complicated coalitions. The likelihood of something similar happening in the US remains remote.

After decades of support, it will not be easy for even self-conscious libertarians to dislodge themselves from traditional party loyalties. This will be more difficult given the American media’s unwavering representation of party politics as having only two-sides; though the Libertarian Party’s stance is far simpler than that of its larger competitors, it is hardly articulated in public discourse. Finally, though Trump, Warren and Sanders may be pushing libertarian voters away from mainstream parties, they are also demonstrating these parties’ capacity for renewal. When it comes to winning over mainstream politics, libertarians may have lost the battle but not the war. The Republican Party may soon face another libertarian siege… But for the elections to come, a change of tactic will likely be necessary – and it could prove consequential, if libertarians move as one.