As part of efforts to reduce traffic accidents, many cities and towns in the US have introduced red light cameras which electronically assign fines to drivers who break the law. But new research from Justin Gallagher and Paul J. Fisher finds that these cameras don’t reduce accident numbers at all. Instead, they write, the behavior changes caused by red light cameras among drivers leads to different types of accidents with no change in injury rates.

Traffic accidents killed over 36 thousand people in the United States in 2014, and injured more than 2.3 million people the previous year. In urban areas, by far the most likely location for an accident is at a traffic intersection. Figure 1 shows annual accident rates for the city of Houston, Texas from 2003-2014 by 100-foot intervals from an intersection. Roughly three times as many accidents happen within 200 feet of an intersection than at any other distance. 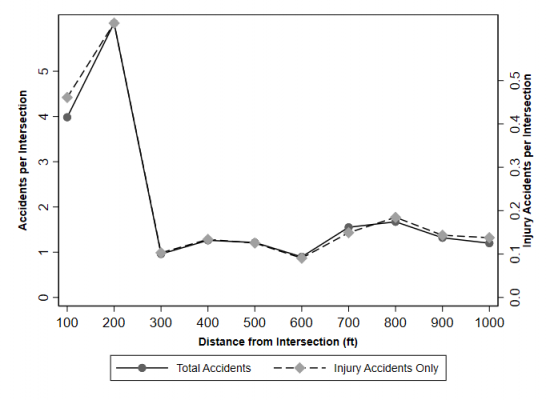 Note: The figure plots average yearly total accidents and injury accidents by distance from a Houston intersection in 100-foot bins for the years 2003-2014. The data include all accidents classified as “in or related” to the intersection by the police who recorded the accident. An “injury accident” includes one or more non-incapacitating injury, incapacitating injury, or death. Data sources: Texas Department of Transportation.

Over 400 US cities, including nearly two-thirds of the 50 most populous cities, have employed electronic monitoring programs in order to enforce traffic laws at intersections. Red-light camera programs (which we’ll refer to as “camera programs”) specifically target drivers that run red lights. A camera is installed in a location where it can take photos (or video) of vehicles as they pass through the intersection. If the light is red and the vehicle is in the intersection, then a ticket is sent to the home address of the individual who registered the vehicle. The underlying policy assumption is that by incentivizing fewer drivers to run red lights via a dramatically higher probability of being caught, the total number of accidents will decline. In new research, we find that this isn’t necessarily the case.

How do we know this? A simple economic model shows that the overall effect of a camera program on vehicular accidents and injuries depends on the importance of two effects. First, some drivers who would have otherwise continued to proceed through the intersection when the light is yellow or red will now attempt to stop. The number of accidents caused by vehicles not stopping at a red light, such as angle accidents, will likely decrease. Second, the number of accidents from stopping at a red light, such as rear-end accidents, will likely increase. The reason is that driver awareness of the cameras will lead some drivers to attempt to stop and accept a higher accident risk from stopping at the intersection, in order to avoid the expected fine from continuing through the intersection. Moreover, engineers have long recognized the existence of a “dilemma zone.” The dilemma zone is the area near to an intersection where a driver can neither safely stop nor pass through the intersection without accelerating before the light turns red. Drivers who attempt to stop while in the dilemma zone to avoid a fine have an increased risk of causing an accident. 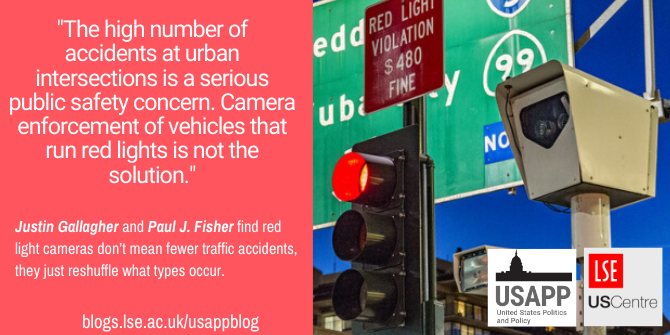 “Red Light Camera” by Tony Webster is licensed under CC BY SA 2.0.

The main challenge in evaluating the effectiveness of camera programs is how to account for the non-random start time and location of the cameras. Figure 2 plots the average number of Houston accidents by year separately for camera and non-camera intersections based on whether there is an accident within 200 feet of the intersection. As Figure 2 shows, intersections chosen for cameras are not selected randomly. Intersections assigned cameras are more dangerous than other intersections. Moreover, intersections with unusually high accident levels in the years just prior to the start of the program are more likely to receive cameras. These same intersections are, in turn, regardless of intervention, more likely to revert to lower accident levels (mean reversion). In fact, Figure 2 shows that there was already a downward trend in the number of accidents at camera intersections in the three years before turning on the cameras. 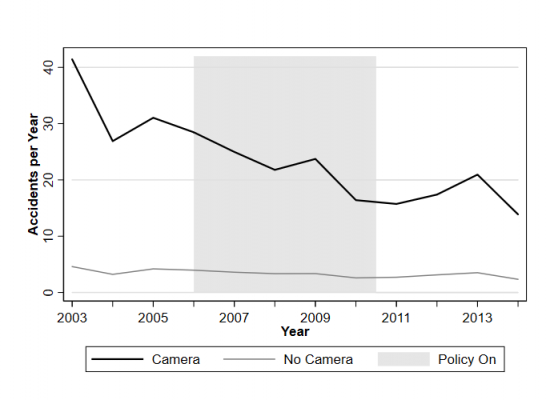 We avoid these concerns by examining the impact of the unexpected shutoff of cameras via a voter referendum. Houston established a camera program in 2006 that grew to include 66 intersections. Houston residents narrowly passed a voter referendum in November 2010 that banned the cameras. The Houston police department and the mayor’s office opposed the ban. After the referendum, the city immediately shut off the cameras. Figure 3 shows that there was nearly as many TV news stories on the camera program at the time of the referendum as there were 12 months earlier about mayor-elect Annise Parker, Houston’s first openly LGBT mayor. 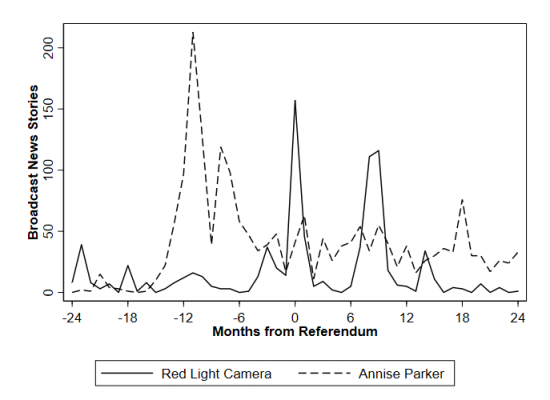 Note: The figure displays the count of monthly television news stories on red light cameras and Houston’s newly elected mayor. Annise Parker, Houston’s first openly LGBT mayor, was elected in a run-off election 11 months before the referendum in December 2009. The month of the referendum is labeled as month 0. New stories include the phrases “red light camera” or “Annise Parker.” Data source: Metro Monitor.

Paul J. Fisher – University of Arizona
Paul J. Fisher is a Doctoral Student in economics at the University of Arizona, Tucson. His primary research fields are environmental and urban economics, with broad interests in a variety of empirical microeconomic topics. His current research involves evaluating policies that influence traffic safety and land use/land taxation policy.