Past research has uncovered distinct differences in how male and female legislators vote. But do these differences apply to foreign policy and military matters as well? In new research which analyses several decades of US House and Senate votes, William Bendix and Gyung-Ho Jeong find no difference in how men and women vote on military matters. Legislators, they write, are more likely to be dovish or hawkish, the more liberal or conservative their electorate.

Are elected women more dovish than elected men? Are they more likely to support military cuts and oppose military action than their male colleagues? Do established democracies become more pacifistic as women gain an increasing share of seats in national legislatures? Because we see an unprecedented number of elected women around the world, these questions have become increasingly important. If gender differences over foreign policy do exist, then the security priorities of many democracies—including the United States—may be shifting. In fact, recent studies have found that military budgets decrease significantly as female representation in legislatures increases.

While there are some important, well-documented differences between male and female legislators, we’re skeptical that gender and dovishness are linked. Here’s why. On domestic policy, legislators generally support bills that either their party’s leaders or their constituents favor. We argue the same thing happens in foreign policy—that partisanship and electoral pressures are much more powerful than gender is in shaping legislative decisions on security and defense.

Before explaining the basis for our skepticism, we should outline why some scholars claim that gender plays a large role in foreign policy decision-making. A mountain of research shows that women, because of biology and social pressures, are less violent and physically aggressive than men. It stands to reason, then, that women as policymakers may prefer diplomacy over militarism. Research also shows that female legislators often act as “surrogate representatives,” reflecting the priorities of women nationally—not just the priorities of their own constituents. As surrogates, they may support diplomacy over militarism not only because they hold dovish views themselves, but also because they want to represent the dovish views that many women also hold.

But to reiterate, we’re skeptical. The studies that link increasing female representation with decreasing militarism haven’t adequately considered how party and constituency affect legislative behavior. Nor have they shown that female lawmakers push for cuts in defense budgets. The research offers suggestive correlations, but no direct evidence.

Identifying the Hawks and Doves in Congress

To see whether gender matters in foreign policy, we look at all national security votes cast in the US House of Representatives since 1973 and all such votes cast in the Senate since 1993. We focus our study on the Congress because US lawmakers have a great deal of independence and can vote against their party without suffering their leadership’s wrath. In most parliaments, by contrast, party discipline runs so high that floor votes don’t necessarily reveal the policy preferences of individual legislators.

“Susan Collins” by Gage Skidmore is licensed under CC BY SA 2.0.

But it isn’t enough to see whether men and women vote differently on foreign policy items. Legislative votes are not directly comparable because they differ in substance and importance. For this reason, we apply a scaling technique to all national security votes that allows us to estimate how hawkish or dovish each member generally is for every two-year Congress. For example, we generate 10 separate estimates for a member who has served in Congress for 20 years, enabling us to track that member’s ideological movement over time. Our hawk-dove estimates run on a scale from roughly +3 to -3, with hawks having positive scores and doves having negative scores.

Digging deeper, we look at the positions of prominent senators from both parties and see whether any other notable patterns emerge. We find many interesting trends, but one stands out: female Democrats from conservative-leaning states and female Republicans from liberal-leaning states diverge most from their parties. For example, Figure 2 shows that Senator Claire McCaskill, a Democrat from reddish Missouri, is a relative hawk while Senator Susan Collins, a Republican from bluish Maine, is a relative dove.

The takeaway is that gender plays, at most, a small role in shaping the foreign policy preferences of legislators. Members appear to take on national security positions that are largely in line with what their voters want.

Gender Is the Effect, Not the Cause

So, what should we make of previous studies that find a strong link between increasing female representation and decreasing militarism? In our view, it’s unlikely that countries become more pacifistic because they elect more women. Instead, we suspect that as liberal, dovish voters become a larger share of the electorate, they elect a larger share of liberal, dovish legislators. And because left-of-center parties often field female candidates, a liberal electorate ends up supporting liberal, dovish legislators who happen to be women.

In other words, the successful rise of elected women isn’t the cause of pacifism—it’s the effect. 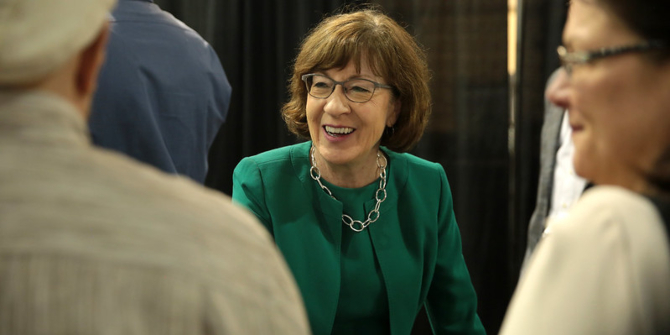