Recent environmental activist protests like Extinction Rebellion are not new: groups including Earth Liberation Front and Earth First! have been using direct action tactics for decades. But with political polarization and political violence seemingly on the rise, are we likely to see more forceful or violent environmental protests? In new research, Ben Farrer and Graig Klein look at the patterns behind incidents of environmental sabotage, finding that they are linked to places where electoral tactics have failed and that voters – who generally do not see these actions as terrorism – are only sympathetic to them when they are used as a last resort.

Since the 2016 election, political tensions in the US have been described as a “cold civil war”. In the run-up to the 2020 election, how much hotter could these tensions get?

Organized political violence has always hovered in the background of American politics. But increasing political polarization has led some to worry that violence is spreading out from the shadows. After 2016, even people who were previously insulated by their privilege were dismayed to see protests turning deadly in Charlottesville, terrorist manifestos targeting elected officials, and mainstream debates becoming increasingly – and perhaps dangerously – contentious.

To answer these questions, we need to sort carefully through the evidence.

In new research, we examine the relationship between electoral politics and political violence, within the US environmental movement. We focus on the extreme end of direct action events inside the US which are defined by forceful and violent environmental sabotage such as the arson and industrial sabotage incidents carried out by groups like Earth First!, or the Earth Liberation Front. We find three notable patterns, both about what causes these actions, and what their effects are.

First, the causes of violence. Looking at the history of the environmental movement since the 1980s, there is a consistent correlation between the failure of electoral tactics and the emergence of political violence. Radical environmentalists are more likely to engage in tactics like arson, sabotage, vandalism, etc., in places where Green Party candidates had stood for election but failed to win.

It’s important to put this relationship in context. Green Party candidates don’t run for office, and then wake up the day after they lose the election and say “Well, that didn’t work; better blow something up”. Green Party activists and radical activists are not the same – but they are associated. They are parts of an organizational field, where one group’s decisions effect the public’s perception of all groups in the movement. Rather, fringe environmentalists always need practical and social support to carry out their actions. They are more likely to get that support if the wider environmental movement sees evidence that nothing else works. If the movement is frustrated, then the fringes will be empowered.

Second, the consequences of these tactics. We find that voters are sympathetic to the use of environmental direct action, but only as a last resort.

If forceful or violent direct action occurs in places with a relatively strong Green Party, it leads to that party being punished at the ballot box (we focus on Green Party candidates as ‘pro-environmental’ candidates, but we also look at Democrats in our research). If the Greens have never run, or if they have only run and lost, then direct action does not disadvantage future Green Party candidates. It does not benefit them, but overall the message is that if people feel that conventional electoral politics are not working, they see more radical tactics as legitimate.

Our third and final finding is that the public do not seem to see these incidents as terrorism. Terrorism leads voters to think about law-and-order issues, and to vote for right-wing parties as a result. This does not happen with environmental direct action, potentially because environmentalists try to avoid harming people. Whatever the underlying reason, it echoes the experience of previous social movements. During the Civil Rights movement of the 1960s, in response to direct action by more radical groups, the public became more accepting of moderate non-violent groups and activism. A similar public response occurred during the Women’s Rights movement in the 1970s. These findings, taken together, certainly suggest that ‘eco-terrorism’ is not a perfect label for how the public sees these events.

Direct action may not hurt the environmental movement

Environmentalists have been pushing for decades against a door that stubbornly refuses to open. Their best efforts, so far, have not led to the changes that scientists say we need. And some environmentalists are escalating their tactics as a result.

This carries risks. Not only is there is a personal risk to the activists involved, but there is also a broader political risk. As a recent article shows, far-right parties in Europe have capitalized on the backlash to environmentalists’ direct action. They frame the climate debate as a cultural revolution, and their parties as the resistance. But the evidence shows that environmental direct action does not automatically ‘tarnish’ the entire movement. Instead, voters see the use of radical tactics as an understandable response to the failure of moderate tactics.

This has a couple of important implications. First, it shows that different organizations within the same movement have important effects on each other. More research is needed on how moderate and radical groups within the same movement influence each other. We hope that social scientists will continue to study these incidents and reveal more of these aggregate patterns.

Second, in terms of the 2020 election, our research implies that political violence is most likely to erupt in places when frustration is highest. If radical groups feel that their more moderate cousins have failed, then they may be empowered to act. They are also less likely to face as much of a backlash in that situation.

Environmentalism may or may not be a good guide to how other movements balance electoral politics with political violence. But by looking through the evidence for each of these movements, we can gradually assemble a fuller picture, not just of the movements themselves, but of American politics as a whole. 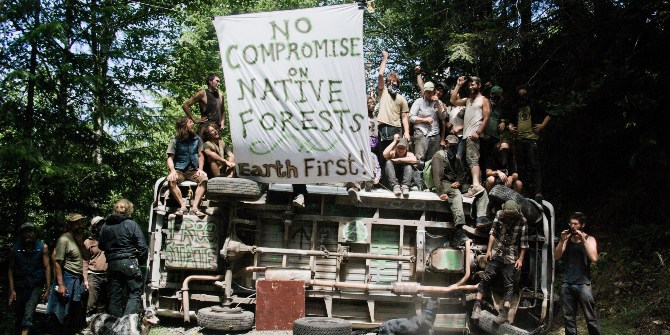 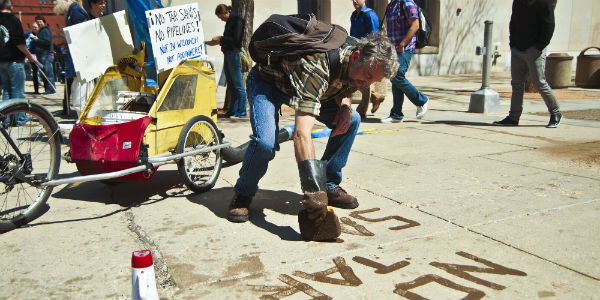 Words and deeds: electoral success for Greens in the US leads to less environmental sabotage