Inequality and the 1%: what The Economist overlooked

Inequality and the 1%: what The Economist overlooked

The issue of inequality now dominates politics on both sides of the Atlantic, with concerns over the wealth of the top 1% fuelling movements like Occupy Wall Street and the presidential candidacies of Senators Berne Sanders and Elizabeth Warren. Andy Summers responds to recent research which suggests a new way to measure incomes, which may then change what we know about inequality. He argues that everything that we previously knew about economic inequality isn’t wrong; it simply shows that how we think about inequality is still subject to debate.

The Economist’s recent briefing “Measuring the 1%: Economists are Rethinking the Numbers on Inequality” has caused a stir amongst inequality scholars. The report, published at the end of November 2019, suggests that new US research has refuted the widely held view that economic inequality has been rising in recent decades. Researchers at LSE’s International Inequalities Institute disagreed with their take, so we set out to explain why in a brief rejoinder that was published by The Economist.

The Economist began its piece by recalling the well-known research of Thomas Piketty and Emmanuel Saez, identifying the pair as “pioneers” in the use of tax records (rather than surveys) to estimate the distribution of income and wealth. That’s not quite right: the late Sir Tony Atkinson had been using tax data to investigate inequality since the 1970s, and he was following in the footsteps of another LSE professor, Richard Titmuss, whose 1962 book Income Distribution and Social Change challenged what was then the prevailing view – drawing on analysis of tax data – that UK inequality had fallen during the post-war period.

Academic debates about the measurement of inequality are nothing new. Indeed, many of the key empirical and conceptual issues flagged in The Economist’s “Measuring the 1%” bear striking resemblance to those discussed in Titmuss’ book over half a century ago. But it is true that the ground-breaking work of Piketty, Saez and (more recently) Gabriel Zucman, amongst others, has helped to drag the issue of economic inequality into the US political mainstream, in a way that feels genuinely new and significant. And it is also true that these academics have since faced push-back from others in their discipline.

The Economist does a decent job of summarising this sceptical turn in the US inequality literature, centring its briefing around a recent working paper by Gerald Auten and David Splinter, two economists at the US Treasury and Congress’s Joint Committee on Taxation. Auten and Splinter take issue with several aspects of Piketty, Saez and Zucman’s approach, emphasising the need to account for changes in family size, falling marriage rates, and special features of how income is reported on individual and corporate tax returns, when considering long-term trends in income distribution. 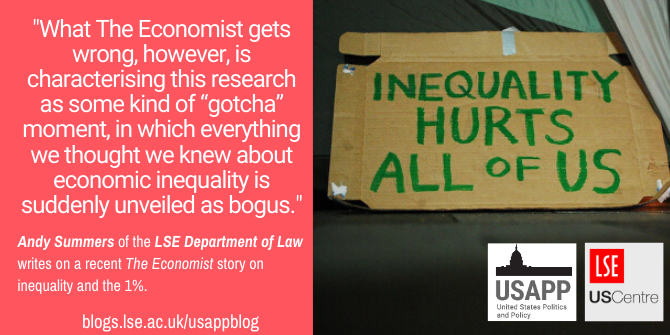 What The Economist gets wrong, however, is characterising this research as some kind of “gotcha” moment, in which everything we thought we knew about economic inequality is suddenly unveiled as bogus. For one thing, Auten and Splinter would not dispute the fact that even on their measures, US income and wealth remain very unequally distributed. They usefully highlight the sensitivity of existing estimates to choices about the tax unit, definition of income, and so on. But it is not straightforward to conclude that their choices are “right” and those of others “wrong”; social scientists may need to get used to the idea that some aspects of inequality measurement are properly the subject of conceptual (and not purely empirical) debate.

At least this debate is now happening in the US, even if The Economist’s account of it is somewhat lopsided. Meanwhile in the UK, our discourse on income and wealth statistics lags far behind. To take one example: whilst US economists argue about whether it is better to include capital gains or retained profits in the definition of income (these overlap, but both are concentrated at the top of the distribution), in the UK we still simply ignore both. Our income statistics miss the £34 billion in capital gains that went to just 9,000 individuals last year – much of it deferred business income – because we remain stubbornly wedded to the idea that income is only income if it’s subject to Income Tax. Titmuss argued strongly against this approach in 1962; and yet, still, here we are.

Whatever the outcomes of the current back-and-forth serialised by The Economist, it would be a mistake to assume that revisions to the US picture will foreshadow equivalent findings elsewhere. One of the perils of relying on tax data to measure inequality is that because every tax system differs, each country’s tax-based statistics may be wrong (or incomplete) in different ways. We don’t yet know the full story for the UK, but initial indications are that differences at the very top may yet be larger, not smaller, than previously thought. This is a debate that will continue to run, and we hope that The Economist will continue to take an interest, whatever the result.