At the beginning of December, California Senator Kamala Harris ended her campaign for the Democratic presidential nomination. With the first primary contests just over a month away, Andreu Casas, Ericka Menchen-Trevino, Miriam Boon and Magdalena Wojcieszak investigate who her supporters are likely to vote for. Using new survey data, they find that The Daily Beast may have an important say as to which candidate benefits the most.

Democratic candidates looking to pick up Senator Kamala Harris’ votes, following her exit from the Democratic presidential primary should be paying attention to The Daily Beast, according to our research. Before Kamala Harris dropped out of the race in early December, her supporters showed no clear preference for any of the other Democratic presidential hopefuls. There was one thing about her supporters that did stand out, however: a disproportionate number of them are readers of The Daily Beast, a US daily news and opinion website.

By the time Harris announced the end of her campaign, her support had dropped from a high of over 20 percent to a low of about 5 percent. That may seem like a small percentage of voters, but 5 percent  would be enough to boost either Senator Elizabeth Warren or Senator Bernie Sanders, who are currently neck-and-neck, into second place, behind Joe Biden. Likewise, those votes could allow Southbend Mayor Peter Buttigieg to become a real contender capable of competing with both Warren and Sanders. With the next Democratic debate this  Friday, the question is which candidate is going to win over Kamala Harris supporters?

As part of an ongoing research project on news diets and how people feel about parties they support and oppose (what political scientists refer to as affective polarization), in the last few weeks, we surveyed a sample of American citizens. We used the opportunity to ask them about their opinions towards the different Democratic contenders. In light of Harris’ announcement, we wanted to see what our data could tell us about who could gain the favorability of her supporters and how they could do so.

Notes: How (a) familiar Harris supporters are with the other top candidates, how they (b) feel about them, and what proportion would (c) vote for them if facing Donald Trump in the Presidential election. Average values plus 90 percent confidence intervals.

First, we used traditional survey questions to ask supporters of Kamala Harris about their familiarity, positive feelings, and voting intentions toward the top Democratic contenders (see Figure 1). In short, none of the alternative candidates seemed to stand out to them. For example, although on average Harris supporters felt warmer about Sanders than Biden, the difference was rather small and not statistically significant. The only meaningful signal that clearly stood out was that Harris supporters were substantially less familiar with Mayor Peter Buttigieg than any of the other top candidates (he will have to keep working on raising his profile  if he wants to have a fair shot at attracting those who supported Harris). Overall, the survey questions did not reveal much about which candidate could take on Harris’ supporters (nor how). Luckily, we collected another (and more interesting!) type of data that gave us a hint on how other candidates could potentially get started on achieving such a goal.

“Kamala Harris with supporters” by Gage Skidmore is licensed under CC BY SA 2.0

We used Web Historian (software developed by one of the team members, Dr. Ericka Menchen-Trevino) to allow our survey participants to review and share their online browsing history (i.e., detailed information about which news websites they had browsed). This allowed us to get a comprehensive picture of the online sources they usually use to learn about politics in general, and the campaign, and the candidates in particular. This is extremely relevant because the media can influence the way in which we view some candidates (e.g. the famous Kennedy – Nixon debate from 1960) but also because support for a political candidate (or a set of political ideas) often correlates with a particular news diet. By exploring the news sources that supporters of Kamala Harris are more likely to consume, we can learn about the media space that other candidates should conquer if they want to be in a better position to win over her supporters.

Note: Average number of times that supporters of Kamala Harris have accessed these news domains from October 1 through December 5th. (Right panel) How much less likely supporters of the other major candidates were to access these three news domains. Only statistically significant differences are reported. In the statistical model used to estimate the likelihood we also account for the respondents’ ideology.

When we looked at how supporters of each candidate found political information online, a few interesting things emerged. First, there are similarities among supporters of all candidates: CNN and The New York Times are major news sources for supporters of Democratic candidates, regardless of which candidate they support. However, we also found some revealing differences. In particular, Harris supporters visited The Daily Beast and Salon substantially more than others. On average, they visited Salon about 4 times (3.86) in the last two months and they accessed The Daily Beast about 7 times (7.54) during the same time period. This is not too far from CNN, which is the news site that, along with The New York Times, Kamala Harris supporters have visited the most (between 9-10 times since October 1).

We used a statistical model to find out how likely supporters of the other candidates were to access these particular news pages. Supporters of all other contenders were about .15 times less likely to get their news from Salon, which means that for every 10 visits by Harris supporters, those who support Biden, Warren, Sanders, and Buttigeig accessed the site around 8 and 9 times. But more importantly, although Warren and Biden’s supporters were equally likely to visit The Daily Beast, we found that for every 10 times Harris supporters accessed the website, supporters of Buttigieg and Sanders did do so only between 7 or 8 (so that they were between .20 and .25 less likely to do so).

Overall, two main points stand out from the news consumption pattern we analyzed. First, despite strong similarities, supporters of Kamala Harris differed in the sources from which they consumed political news. With her out of the race, conquering that particular media space can help other candidates win over her supporters. Finally, some of the major candidates seem better positioned than others to take over that media ecosystem. Biden and Warren already seem to do well among the readership of The Daily Beast, one of the most visited sites by Harris supporters. Nevertheless, Sanders and Buttigieg will need to work harder to strengthen their presence among that part of the electorate. Their primary prospects may depend on it. 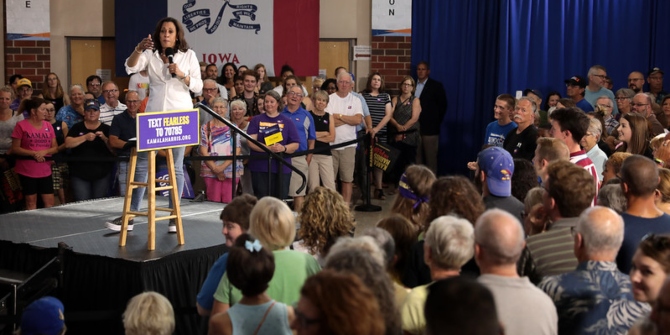