The new year had only just begun when a US drone strike killed Iranian General Qassem Suleimani, which subsequently led to retaliatory action from Iran. Christian Emery argues that despite rhetoric about containing Iran, the Trump administration lacks any coherent strategy towards the country, with little evident rationale behind the killing of Suleimani. What it may actually signal, he writes, is the beginning of the end of US involvement in the Middle East.

In the fallout following the US drone strike that killed General Qassem Suleimani on January 2nd, the Trump administration has advanced various aims for an attack that plunged the world into the dire spectre of direct military conflict between Iran and the United States. The latest one from US Secretary of State, Mike Pompeo, sets it within a much wider strategy to deter challenges from US adversaries in the region, specifically including Russia and China. This takes us very far away from the initial rationale that Suleimani was hit to disrupt an imminent terrorist attack on US forces.

The switch to broader considerations of geopolitical competition conveniently intersects with the failure to provide any intelligence showing that killing Suleimani did indeed prevent an imminent attack. According to President Trump, it ‘doesn’t really matter’ if Suleimani was about to kill Americans anyway. The President has since linked his maximum pressure policy to the resumption of mass protests on Iranian streets and accused his critics of being soft on Iranian terrorism, which perhaps was always his only real goal.

Shifting aims are the unmistakable sign of a bankrupt foreign policy. Originally designed to force Iran to accept more severe restrictions on its nuclear programme, Trump now declares he ‘couldn’t care less’ if his ‘maximum pressure’ policy forces Iran to re-negotiate. Not that he had put any effort into working with the remaining signatories to develop a realistic alternative. As most experts predicted, Iran responded by increasing its stockpile of enriched uranium.

Trump told key allies in the region they finally had a willing partner to confront Iran’s rising regional power. This commitment soon fell apart as Trump balked at retaliatory strikes after Iran shot down an American drone. As Iran retaliated against Trump’s bludgeoning sanctions by harassing shipping in the Strait of Hormuz, the goal became protecting allies and freedom of navigation in the Persian Gulf. This too soon slipped away when Iran started attacking Saudi oil facilities. Trump told stunned leaders in Riyadh they were solely responsible for any retaliation and played down US security interests in the Gulf. To hammer home the message he promptly abandoned the Kurds, the only ally who has recently shed blood in the service of American interests.

US pronouncements have only become more incoherent since Suleimani’s killing. The main catalyst seems to have been Trump’s outrage following the killing of an American contractor by an Iran-linked Shia militia in Northern Iraq on December 27. As noted, serious doubts exist now that Suleimani was neutralised to prevent an imminent attack. But this still leaves open the idea that Iran had crossed a line by killing an American and Trump sought to re-establish deterrence against further lethal Iranian actions. Yet as leading experts on deterrence have pointed out, Iran is unlikely to have fundamentally changed its estimation of how the US responds to such actions. The most important feature of this cycle of escalation remains that Trump hasn’t the stomach for a major confrontation, particularly in an election year. And as the Saudi and British governments discovered last summer, Iran can choose from a large menu of potential pressure points that won’t endanger American lives.

So, what is it that Trump wants to achieve? Apparently not regime change. Is it the more muscular containment strategy implied by Pompeo? If so, that will require extending US deterrence with even less regional support and fewer US forces in theatre than there are now. This sits uncomfortably with Donald Trump’s consistently held view that America no longer has important interests in the Middle East to protect. If Trump were serious about his aim of containing Iran, he would be trying to resolve the dispute amongst the Gulf Cooperation Council and Qatar, trying to stop all of America’s allies from working at cross-purposes in Syria, and trying to influence a less destructive Saudi strategy in Yemen. Thus far the only positive consequence of Trump’s ineptitude is that the Saudis seem to have decided that they can’t rely on Washington and had started to explore ways to de-escalate tensions with their bitter rival. Yet if reports are true that Suleimani was killed on his way to delivering Iran’s response to the Iraqi Prime Minister, Riyadh’s chosen interlocutor, then Washington may even have blown up a desperately needed rapprochement between these two regional rivals.

Another possible aim, revealed in a series of unclassified memos sent to former National Security Advisor John Bolton at the start of last summer, is what some have termed ‘regime disruption’. The memos show that some officials were already considering the assassination of Suleimani when tensions escalated 7 months ago. The author, Bolton’s long-time sidekick David Wursmer, argues that striking right to the heart of the Iranian regime would ‘rattle the delicate balance of forces and the control over them upon which the regime depends for stability and survival.’ The plan faced opposition from the Pentagon, which opposed military escalation, and from Trump himself, who had long made it clear that he didn’t share Bolton’s enthusiasm for regime change. 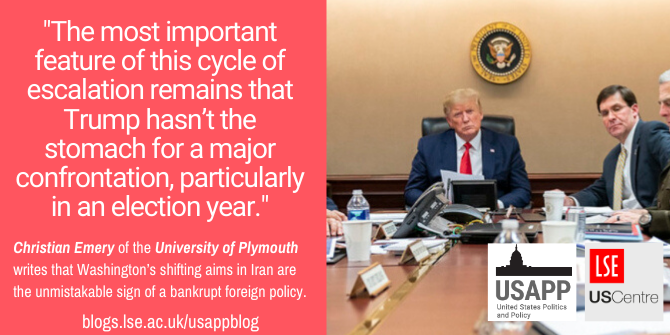 Yet ‘regime disruption’ may be one of the long-term consequences of Suleimani’s death. Not because the act itself damaged the regime’s legitimacy, as Wursmer anticipated. Rather, because of the unanticipated mistake Iran made in accidentally shooting down a Ukrainian passenger jet, killing all 176 passengers. Such an inexplicable display of military incompetence, followed by a botched cover up, has seriously damaged already fragile public confidence in their government. Last week Iran’s leaders were orchestrating a unifying national outpouring of anger and grief. Now Iranians are once again taking to the streets to show how sick and tired they are of their country rebounding from one calamity to the next.

US officials seized on the protests to draw attention away from ongoing concerns about the consequences of Suleimani’s killing. But it cannot distract from the complete absence of any US strategy in Iran. Nor does it mean we should accept Trump’s claim that Iran is ‘standing down’. Trump clearly feels vindicated by Iran’s circumscribed retaliation and now wants to de-escalate tensions. Yet his failure to understand why escalation occurred in the first place, and his inability to understand the consequences or contradictions of his actions, make him singularly ill equipped to do so. As the Bush administration disastrously illustrated in Iraq, as the foundations of each rationale and objective are consecutively undermined, the entire scheme’s edifice inevitably collapses.

Regardless of Trump’s mishandling of foreign policy, Iran would be foolish to think it’s about to get the full American withdrawal it craves. Yet, the killing of Suleimani does seem to advance trends pointing towards the end of American hegemony in the Middle East. It has cast further doubts about Washington’ reliability in the minds of regional allies. It has given Trump a platform to tell the American people that this is a region that America has no interest in policing. It has further incentivised those actors committed to hastening a post-American Middle East to keep destabilising the region. It also looks like a major watershed in US-Iraqi relations. We can expect a major Iranian political campaign to encourage the Iraqi Parliament to carry out its threat to expel US forces. Iran may eventually try to chalk this up as Suleimani’s revenge.