How Latino anger about Trump has led to greater political action

How Latino anger about Trump has led to greater political action

During the 2016 election campaign, one of Donald Trump’s main platforms was to attack Mexicans and immigrants. In new research, Angela Gutierrez, Angela X. Ocampo, and co-authors find that these attacks meant that Latinos were more likely to feel solidarity with immigrants and therefore feel angry at Trump during the election. Since the election, these Latino voters have channeled their anger into greater levels of political activity, such as donating to campaigns and protests.

As another Presidential election approaches, pundits and commentators alike will once again puzzle over who will win the Latino vote and how it is going to influence the outcome. Four years ago, it was no different. However, what was unique about 2016 was that it provided a clear case of group threat at the national level. This, of course, was due to the vitriolic rhetoric and policy proposals of the Trump campaign which explicitly targeted Mexicans and immigrants. In many ways, Trump’s campaign in 2016 mirrored the tactics used by California Governor Pete Wilson who in his re-election bid in 1994 backed the voter approved Proposition 187 —a measure that denied public education, health care and other services to undocumented people– and ran an anti-immigrant campaign. Proposition 187 and Gov. Wilson are credited for having given rise to the Latino political power that has endured in California since the mid-90s.

In order to examine if and how group threat mobilized Latinos in the Trump era, we used data from the 2016 Collaborative Multiracial Post- Election Survey (CMPS). We find evidence that Latino voters were politically motivated by Trump’s anti-Latino rhetoric. Our research shows that Latino voters who perceived their group as a racialized group and felt a sense of immigrant linked fate were more likely to hold negative views towards Trump and feel angry during the 2016 election. Angry Latino voters were more likely to engage in political activities such as donating to campaigns, contacting government oﬃcials, and protesting during and shortly after the 2016 election. The findings hold for US born Latinos as well as among non-Mexican Latinos who felt similarly targeted by Trump’s rhetoric and proposals.

Questions surrounding Latino unity have been raised given the many different countries that Latinos can come from. When you add in language, generation, and regional differences in the United States, some wonder if members of the group are more likely to assimilate into a white American identity, or if Latinos in the United States will continue to have their own distinct identity. Newer immigrants from Latin America and US born Latinos recognize that they too share in the marginalized status of Latinos in the United States. Latinos in the United States have come to understand that the broader American society largely does not view Latin American countries distinctly and that discrimination is likely to occur no matter the country of origin. We argue that because of this racialized identity, Latinos are more likely to view themselves as similar in status and as part of a collective (or ‘panethnic’) grouping. This racialized identity is particularly important in 2016 when individuals may feel that their membership to the broader US. society is being questioned. Not only are Latinos in the United States racialized by their skin color, language, and culture, but Donald Trump’s attacks against immigrants particularly resonate with the Latino population because of their more recent immigrant history. 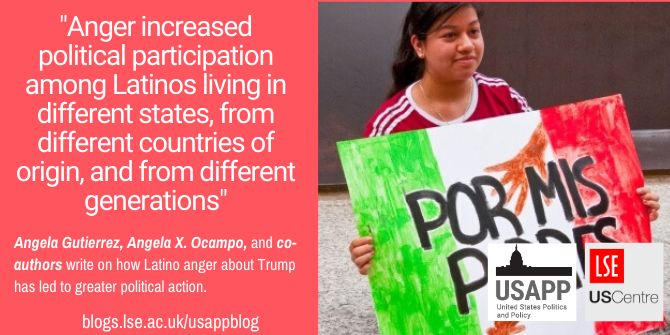 Due to attacks from other groups, we expected Latino identity to become the most important one among Latinos of all nationalities that felt a connection to the group. To better understand this racialized panethnic identity we focused on two measures, feelings of racialized discrimination towards Latinos in the US broadly, and a new measure we call immigrant linked fate (where Latinos feel that attacks on immigrants were essentially attacks on them). We argue that racialized identity and immigrant linked fate became important in the 2016 election, and those with high levels of immigrant linked fate and racialized discrimination were most likely to hold an unfavorable view of the Republican candidate. We also expected that Latinos who viewed Trump unfavorably were more likely to feel angry about the 2016 election and mobilize during the 2016 campaign.

We first examined feelings toward the Republican candidate via Trump favorability, as shown in Figure 1. We found that the racism scale and immigrant linked fate were strongly correlated with negative attitudes towards Trump. We also found that believing racism is the most important issue is associated with disliking Trump. When looking at how support for Trump changed by national origin, those of South American and Cuban origin were correlated with holding a more positive view towards Trump when compared to Mexican Americans, but we found no eﬀect among other national origin groups. The only generation that viewed Trump more favorably relative to first generation immigrants were third generation Latinos. Interestingly, we found that this does not extend to later generations since fourth generation+ respondents are no different when compared to first generation Latinos. 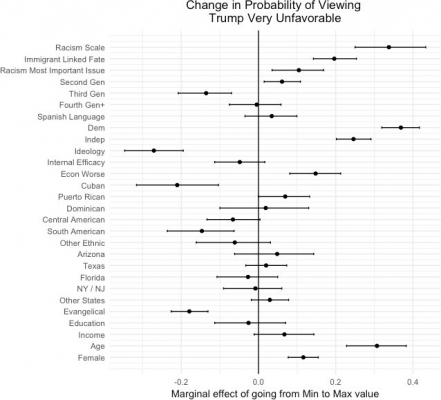 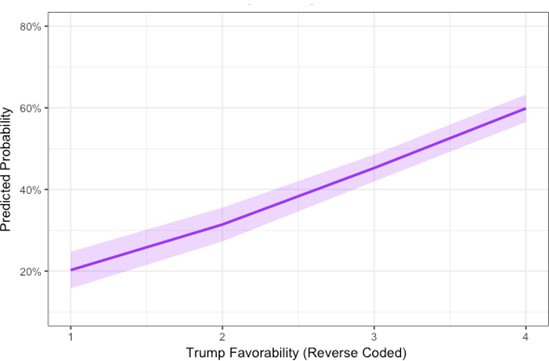 Given the blue wave during the 2018 midterm elections, it appears that this anger has not yet faded. The question remains, will Latino voters continue to be angry and engaged in 2020?