Historically, minorities have been underrepresented in leadership positions in the US states. In new research Sarina Rhinehart and Matthew Geras look at the characteristics of 1,200 leaders in state executives. They find that racial and ethnic minorities are more likely to be appointed than elected into state executive leadership positions, and are more likely to be appointed by Democratic governors than Republicans.

In the 2019 off-year state elections, Daniel Cameron, a Republican backed by President Trump for state attorney general, made news as the first Black person to be independently elected to a statewide office in Kentucky. State attorney, alongside other positions, such as secretary of state and secretary of education, are top-level leadership positions within state government that hold immense power to shape and implement state policies and programs. Yet, these leadership positions are precisely where people of color are the least represented.

In new research, we explore the number of people of color in these state leadership positions, and whether the method by which these positions are filled, either by election or governor appointment, plays a role in promoting the inclusion of historically underrepresented groups.

Some governors are motivated to promote diversity through their appointments. Moreover, even governors who are less concerned with promoting descriptive representation (where lawmakers have similar characteristics to who they represent) may face pressure from outside organizations and the media to make diverse appointments. For elected positions, even if voters are motivated by promoting diversity in government, they are limited by the candidates willing to run. Candidates of color struggle to win statewide elections, as they have to appeal to a majority White voting base which are more likely to back White candidates. We therefore expect racial and ethnic minorities will be more likely to serve in these state leadership positions when they are appointed rather than elected. 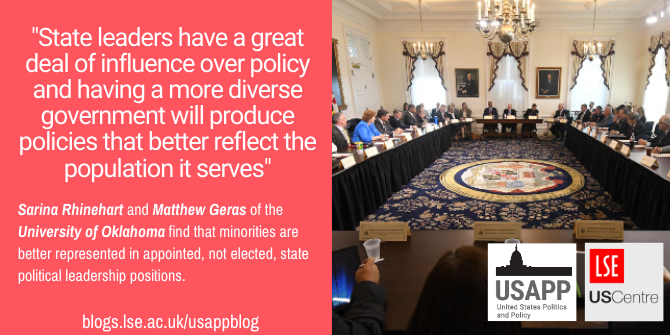 “Governor’s Cabinet Meeting” by Maryland GovPics is licensed under CC BY 2.0

Using an original dataset of 1,200 officeholders across seven state executive leadership positions — commissioner of agriculture, attorney general, superintendent of education, insurance commissioner, secretary of state, treasurer, and chair of the public service commission — in all 50 states from 2001 to 2017 – we find support for our expectation, that minorities are significantly more likely to serve in appointed positions compared to elected positions (Figure 2). Furthermore, we find that Republican governors are less likely than Democratic governors to appoint people of color to these positions.

Figure 2 – Likelihood that minorities serve in appointed versus elected positions 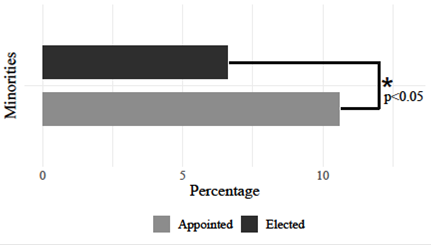 These findings are important for several reasons. First, these state leaders have a great deal of influence over policy and having a more diverse government will produce policies that better reflect the population it serves. Additionally, these positions serve as a pipeline to higher office. For example, California Senator Kamala Harris previously served as state attorney general. Having more people of color in these state-level positions will create more quality candidates for governorships and Congress.