Following several days of early voting, on Saturday February 22nd, Democratic Party members will caucus in Nevada to choose their preferred presidential nominee. Ahead of the caucuses, Eldrid Herrington writes that while the Republican Party has cancelled their version, the state’s Democratic Party has moved to avoid an Iowa-like debacle by bringing in a hybrid voting system and avoiding the use of a personal cellphone app to report vote tallies.

Nevada became a US state in 1864, during the Civil War, giving it the motto “Battle Born”. It is a battleground state politically, a “purple” state. Obama won the state’s five and then six electoral college votes in 2008 and 2012, turning it blue, but Republicans won midterms in 2010 and 2014, turning it red. In the 2016 caucuses, Republicans chose Donald Trump and Democrats chose former Secretary of State, Hillary Clinton, who narrowly beat Vermont Senator Bernie Sanders. In 2016, Clinton won the electoral college votes for the state, the senate seat turned from Republican to Democrat, Democrats gained seats in the House of Representatives, and the state legislature flipped from red to blue. In the 2018 midterm elections, Democrats again predominated in Congressional elections. Nevada is a battleground, but it is also a bellwether: its popular votes tend to track national trends.

This bellwether effect is due to Nevada’s population, which is representative of the nation as a whole in terms of census demographics. Its diversity has increased over recent years, and, as in the rest of the US, this diversity is unevenly spread across the state. Voting trends are split between populous Las Vegas, sited in southern Clark County, which favors Democrats, and the northern rural areas and smaller cities, which typically vote Republican.

Nevada’s Latinx population makes up a third of the electorate and there are significant populations of Ethiopian and Filipino heritage. Nevada has a politically engaged Native American population, comprising 1.5 to 2 percent of the electorate. Claims of discrimination are frequent: voters in tribal areas sometimes need to drive 50 to 100 miles to their nearest polling station and post office box addresses can be a reason for voter registration refusal.

Unions in Las Vegas are powerful and influential, particularly the Culinary Workers Union and the Service Employees International Union (SEIU), who have their own election mobilization operations that are strictly separated from the political parties. Dominant industries in the state center around the casinos, whose employees are highly transient. This means that voter registration and voter engagement are key to electoral politics in the state.

Nevada is one of very few states where both parties hold caucuses rather than primaries. Although both parties caucus, the Democratic Party has made several tactical adjustments in the past 12 years in order to increase voter turnout and political engagement in Nevada. Many of these strategies are attributed to former Democratic US Senator and Majority Leader, Harry Reid, who continues to exercise considerable influence within Nevada politics. Aside from the caucus itself, voter registration requirements mean that the parties came in early to organize for elections; this and early voting tend to favor Democrats.

Establishing a caucus system ensures that the parties identify and mobilize volunteers and voters at an early point in the electoral cycle. Caucuses typically draw out the most engaged party faithful, who not only provide powerful voices in the caucus itself, but also a committed volunteer base. Nevada’s caucuses were moved forward in the electoral calendar, placing it just after the Iowa caucus (midwest) and New Hampshire primary (New England) and just before the South Carolina primary (South) and “Super Tuesday”. Placing Nevada as “first in the West” is intended to increase voter interest within the state, driven by media interest from outside. The caucus results also give the national parties an indication of how the nation might vote. 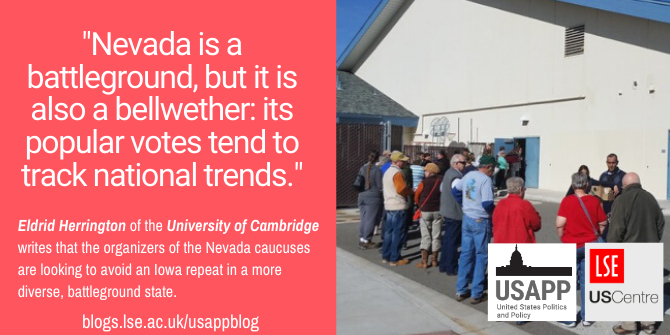 “Caucus Queue” by Kevin Standlee is licensed under CC BY NC SA 2.0.

The state’s Republican Party has cancelled their caucus for 2020, having agreed to devote all convention delegates to Trump. All eyes, therefore, are on the Democratic caucus, particularly considering the debacles in the first Democratic caucus in Iowa.

The Nevada Democratic presidential caucuses take place on Saturday, 22 February 2020; however, a new early voting “caucus” starts a week before, on Saturday 15 February and ends on Tuesday the 18th. This novel hybrid between in-person debate and early ranked voting is unique in the US at present. The party changed the caucus format in response to criticism from voters: the caucus process can be exhausting, time consuming, and contentious, which can put off voters who are time poor and those with caring responsibilities and health conditions. Shift work in Nevada can mean that it is exceptionally challenging for voters to attend a caucus at a particular time, especially on weekends.

Voters are now able to head to voting sites early and register five ranked choices, which will later be combined with caucus results. This eliminates one effect of caucuses: the ability of your peer to influence your vote. The effect may favor moderate Democratic candidates.

The Democratic Party made additional changes to communications and locations. Democrats have provided caucus materials in English, Spanish, and have added Tagalog, a language from the Philippines, this year, as one of the most commonly spoken languages in Nevada. Several caucus sites are now located behind casinos, making it convenient for workers, particularly those in unions.

To app or not to app

The Nevada Democratic party, keen to avoid the vote reporting debacle in Iowa, has made several concrete changes to its operations. At the time of writing, several changes may still take place to caucus procedures. Grass roots responsibility for running the caucus and for tallying and reporting caucus results fall heavily on volunteers. In Iowa there has been significant unhappiness from volunteers that Nevada organizers are desperate to avoid because it can jeopardize organizing for the general election. For the moment, precinct captains will not be reporting vote numbers from an app downloaded on their personal cell phones. Instead, they will report on party-owned iPads. The two sets of results – early voting and caucus – will be combined to produce vote totals. This makes outcomes difficult to predict and it will be interesting to see how accurate polling will be.

The Republican caucus is not taking place but Trump, the de facto Republican nominee from the state, will hold a rally in Nevada the day before the Democratic caucus, a strategy his campaign is likely to deploy for the rest of the election cycle.

Polling indicates that Sanders and Biden are the front runners in the state at the time of posting. Who will predominate following the 22nd? Nationally, the caucus system tends to favor Senator Bernie Sanders because of his committed and vocal support from voters who can give enough time to the caucus process: in 2016 he won every caucus…except Nevada. Why? Nevada voters, an average of the nation, are generally moderate. And Nevada unions have come out strongly against Sanders given his stance on universal health care, which in their view would jeopardize hard-won union health care plans.

Nevada’s past three presidential elections suggest that a Democrat will win its electoral votes in 2020. However, the state will remain a battleground in a nationwide election with a likely victory for the Republican incumbent.