Consent decrees – agreements for reform between police departments and the government – are one way to reform police forces which engage in patterns of misconduct. Using national data covering over 900 police departments, Li Sian Goh assesses whether consent decrees are effective, finding that their use – alongside court-appointed monitoring – was linked to a 29 percent reduction in officer-related fatalities.

In 2018, the Trump administration announced that it was limiting the use of consent decrees, creating a series of roadblocks to render them both ‘rare and ineffective’. Consent decrees, which are legally binding agreements between the government and law enforcement agencies that have been found to have routinely engaged in a pattern or practice of misconduct, such as the use of excessive violence, have been negotiated in cities such as Ferguson, Baltimore, Chicago, and Los Angeles. They routinely address departmental policies relating to recruitment, training, discipline, and documentation – and are a key instrument in policing reform and accountability efforts.

Although important, consent decrees are only one of a number of possible outcomes of Department of Justice (DOJ) interventions in law enforcement agencies. DOJ interventions generally begin with an investigation to establish the existence of a pattern or practice of misconduct in the police department, usually following a high-profile use of force incident. These investigations usually take a year, during which DOJ officials review existing policies and practices, speaking to a wide range of parties including patrol officers, officers in management positions, citizens, and community groups.

Following the investigation, the DOJ generally releases its findings, after which three possible options exist. First, the DOJ may conclude that there is no evidence of systematic misconduct and take no further action. Second, the DOJ may issue a technical assistance letter, a policy document outlining recommended policy changes that departments are not legally obligated to implement. Technical assistance letters were the preferred option of the George W Bush administration: between 2000 and 2008, no new negotiated settlements were initiated and the DOJ instead opted to issue technical assistance letters in departments it investigated. Third, the DOJ may decide to pursue a consent decree. Consent decrees take years to complete – the Los Angeles Police Department’s decree began in 2001 and concluded in 2013 – and can cost millions of dollars to implement. The consent decree is often but not always accompanied by the court appointment of a monitoring team to oversee the reforms. 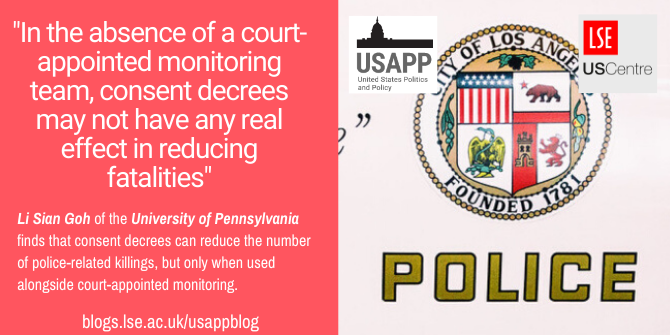 “To Protect and Serve” by Thomas Hawk is licensed under CC BY NC 2.0

Some researchers have reported that consent decrees are generally effective in ensuring that needed reforms occur, although others have cast doubt on the lasting effect of these reforms following the closure of the decrees. To date, no studies have sought to verify the effect of consent decrees or other forms of federal intervention on the number of police. One of the reasons for this is that there is very little certainty about the exact number of people killed by the police in the United States each year. The per capita fatality rate certainly outstrips that of other developed nations, but official sources are unreliable and almost certainly undercount the number of fatalities by about half. In new research, I use data from Fatal Encounters, an independently created dataset built on information gathered through public records requests, media reports, and crowd-sourcing efforts. While there is an abundance of other crowd-sourced datasets of people killed by the police, these tend to document deaths occurring after 2014. Fatal Encounters is unique in aiming to record all fatalities going back to the year 2000.

Using a panel dataset of over 900 departments from the year 2000 to the year 2016, 36 of which had experienced some level of federal intervention, my analysis revealed that where the Department of Justice initiated investigations in departments suspected of engaging in a pattern or practice of police misconduct, these departments were subsequently responsible for fewer fatalities – a reduction of 27 percent. In the absence of court-appointed monitors, consent decrees did not result in significant changes to the number of citizen fatalities. However, when federal courts appointed monitor teams to oversee the consent decree settlement, police departments saw a 29 percent decrease in fatalities. Surprisingly, however, technical assistance letters also influenced the number of reported deaths – in an unexpected direction. Police forces which has a letter issued witnessed an 85 percent increase in fatalities.

My research suggests that federal intervention can effectively reduce the number of deaths caused by police officers, but there are caveats. First, in the absence of a court-appointed monitoring team, consent decrees may not have any real effect in reducing fatalities. Second, issuing a technical assistance letter may not only fail to reduce police-related deaths but increase them instead. The reason for this is unknown – but one possible explanation is that such letters are perceived by law enforcement agencies as mere slaps on the wrist, leaving agencies free to persist with the status quo without implementing any of the recommended policies. If or when consent decrees are reinstated, DOJ officials may be well-advised to consider the contours of this observed effect.