In modern presidential primaries, there is often a disconnect between the candidate that primary voters want, and the more pragmatic electoral choice of party elites. Josh Ryan argues that the “party decides” model of primary election has been tested in recent years, with the nomination of Donald Trump in 2016 and the likely selection of Joe Biden, a candidate for which the Democratic Party’s elites had initially lukewarm support. Given the likely closeness of the 2020 election, he writes, that the party establishment did not actively choose Biden as the nominee may matter a great deal to the outcome.

Presidential Primaries and “The Party Decides”

The way that the Democratic Party choses presidential candidates is still relatively new; how it organised primaries fundamentally shifted in the 1970s and early 1980s due to a number of institutional and structural changes. Most importantly, the Democratic Party democratized the process, allowing voters a greater say in order to avoid the divisiveness that characterized the 1968 campaign. The number of convention delegates directly elected by voters through state primaries and caucuses grew dramatically in this period.

The democratization of the process had an unintended side effect, however. The 1970s and early 1980s saw weak nominees who lost by landslides in the general election (e.g., McGovern in 1972, Carter in 1980). The party elite believed that Democratic primary voters chose candidates who were too liberal and unable to appeal to the national electorate during the general election. As a result, the Party instituted additional reforms, including the creation of the “superdelegates,” which were intended to empower elites to a greater extent. In short, each party’s primary electorate tends to be ideologically extreme and prefers candidates who seem to have a lower chance of winning the general election. Conversely, party elites usually reject ideological purity for a more mainstream candidate with a better chance of winning. This conflict, between primary voters and party elites, has been at the heart of presidential primary campaigns in the modern era.

The dominant theory of how this conflict is resolved is known as, “the party decides,” after the book by Marty Cohen, David Karol, Hans Noel, John Zaller. The authors claim that while voters actually chose the delegates, party elites exert a strong role in picking the nominee by signaling their preferences through endorsements, and by providing resources. In effect, the party chooses their preferred candidate prior to the primary, and voters ratify their decision. The theory has been so influential because it nicely describes the tradeoffs inherent in the modern primary system, and how both elites and voters play a role in picking the nominee.

“The party decides” theory has had a rough couple of election cycles. In 2008, it is not clear that Obama was the party elite’s choice for the nomination. Former Secretary of State Hillary Clinton was the seasoned politician, married to a former president, and seemed like the less risky candidate. One interpretation from a “party decides” perspective might be that party elites decided both Obama and Clinton were acceptable, and allowed voters to pick between them. Indeed, Clinton and Obama roughly split important endorsements early on, suggesting that elites did not coalesce around one candidate.

Both the Trump and Sanders 2016 campaigns are the hardest to square with the theory. Trump was actively opposed by elites, who feared he would be a disaster as a candidate. The same was true on the Democratic side with Sanders, who lost the race to Clinton but managed to prolong it, potentially damaging party unity. A generous reading of “the party decides” on 2016 is that there were so many Republican candidates, it was difficult for elites to coalesce around one, and by splitting their support they gave Trump an opening.

There’s no doubt that the party elite has avoided the outcome they did not want: a Bernie Sanders candidacy. While former Vice President Joe Biden always had more endorsements than Sanders, there isn’t much evidence that the party elite coalesced around him early in the process. As with the 2016 Republican primary, the number of candidates in the race may have divided elite support.

Clearly, the role of elites is weakening. Populism in both parties is driving distrust and anger at elected officials, party bigwigs and other insiders. Bernie Sanders explicitly capitalized on these sentiments in both his 2016 and 2020 runs. Sanders also argued that elites opposed him not because he couldn’t win, but because they didn’t like his policy positions. In fact, Sanders and his supporters claimed he held unique appeals to states Democrats need to win back from Donald Trump in the general election, like Wisconsin, Michigan, and Pennsylvania. 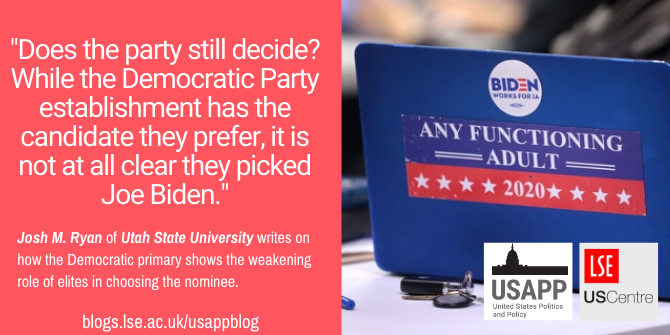 “Joe Biden supporter” by Gage Skidmore is licensed under CC BY SA 2.0

Do the Candidates Actually Matter?

Given that party elites focus much of their attention on picking a candidate who is likely to win the general election, it is natural to ask whether the candidates themselves actually matter. The question seems absurd: of course some candidates are more “electable”; they are better campaigners, appeal to different types of constituency groups, and are better at raising money. But consider that political scientists have incredible success measuring presidential election outcomes months in advance using a few simple indicators: the state of the economy, the severity of any ongoing foreign conflicts, and how long the same party has controlled the presidency.

This predictive success suggests that candidates are not particularly important. The argument is that at the presidential stage all candidates are basically good, competent campaigners, know how to raise money, and receive the full backing of the party and associated interest groups. It might be that the candidates are largely irrelevant, which implies party elites are too concerned about electability.

There is a significant amount of truth to those claims, and the differences between major party candidates are not as large as many think. Donald Trump’s 2016 campaign is evidence for this. He did almost none of the things candidates traditionally do (glad-handing, raising money, etc.) and did as well as a generic Republican candidate was predicted to do.

There are, however, limits to the idea that the candidate and their campaign are basically irrelevant, especially when the election is close. First, there is substantial evidence in political science that more moderate candidates do better, especially as the electorate becomes larger and more diverse. Second, in an extremely close campaign, like 2016 was and 2020 is expected to be, even a candidate who does one or two percentage points worse than another candidate conceivably costs their party the election. Though she won the national popular vote by nearly three million ballots, Hillary Clinton lost the election because she received 100,000 fewer votes across three states, out of more than 120 million votes cast.

Why the nominee may well be important in the 2020 election

Does the party still decide? While the Democratic Party establishment has the candidate they prefer, it is not at all clear they picked Joe Biden. The growth of populism in both parties suggests that the role of elites is weakening. And does it even matter who the nominee is? In blowout elections, like 2008, where baseline factors like the economy make it nearly impossible for one party, the party’s nominee is likely not all that relevant. But, the nominee probably matters on the margins, and in extremely close elections, like in 2016 and 2020, those margins make all the difference. Of course, if Joe Biden loses, claims that Sanders would have won are inevitable (the same would be true if Sanders were the nominee). Unfortunately for political science, we’ll never know the answer to that question.