Recent years have seen a resurgence of nationalist sentiment across many countries in the West and beyond, and the ideology is now shaping much of the response to the worldwide Covid-19 pandemic. Robert Schertzer and Eric Taylor Woods write that this doesn’t have to be a bad thing – if we can tap into the liberal, inclusive side of nationalism as exemplified by past national projects like the New Deal.

Viruses know no borders. By definition, a pandemic is a global crisis. One of the only ways to properly fight them is through global collaboration. But with the terrifying spread of Covid-19 throughout the world, nationalism, rather than internationalism, is shaping the response.

Covid-19 arrived in a world where nationalism was already on the rise. The Indian Prime Minister Narendra Modi, a self-avowed Hindu nationalist, has stoked anti-Muslim sentiment within his own country and against its majority-Muslim neighbours. Unresolved tensions between Japan and Korea have recently flared up. Nationalist “strongmen” from Vladimir Putin in Russia, to Jair Bolsonaro in Brazil and Rodrigo Duterte in the Philippines are the new normal. The election of Donald Trump and Brexit signaled the arrival of this “new nationalism” in the West. The result of all this has been a more divided world. It has also shaped the response to the Covid-19 pandemic.

Each country is dealing with the crisis on their own, and in their own ways. Countries are stockpiling medical supplies and limiting their export. National leaders are blaming migrants for bringing the virus to their shores. People are even turning on their fellow citizens, as Asians face racist attacks in many countries. This retreat inward threatens to further destabilize an already unstable international order. Over the past few weeks, the world has seen the further deterioration of relations between the world’s leading powers, the United States and China, as they descend into a conspiracy-laden spat over which one is ostensibly responsible for causing the pandemic.

Nowhere has the embrace of nationalism in the face of Covid-19 been more apparent than in Donald Trump’s America. Trump’s response to the virus has been shaped by – and sought to stoke – nationalist sentiment. In early March he dismissed the virus as a problem ‘out there’, and labelled Covid-19 a “foreign virus.” In only his second oval address since taking office, he announced significant travel restrictions from Europe. This move was designed to link the Covid-19 pandemic to the themes of his first address from the same room, which centred on the need for immigration controls and a border wall. He continues to call Covid-19 the “China virus,” even as the US is becoming the epicentre of the pandemic.

These developments are concerning. A turn toward an inward-looking and racist nationalism can make much needed international collaboration more difficult. It can exacerbate social divisions at a time when tensions are high. It can also justify illiberal actions in a period when national governments are being given leeway to do whatever they need to stop this virus. It could even limit the sharing of information and funds to quickly develop and distribute a future vaccine. There are signs these nationalist impulses could be taken to an extreme where national governments close supply lines for essentials like medicine and food – a development that could exacerbate the impact of Covid-19 in countries that are less well-off. In short, this turn towards an inward-looking nationalism could derail the global collaboration that is so necessary to save lives.

For those of us who study nationalism, this inward turn is not surprising. Despite predictions that nationalism would decline in an increasingly interconnected world, it remains the world’s most powerful ideology. It is so dominant and widespread that we often forget it exists. To paraphrase the nationalism expert Florian Bieber, “nationalism is like the air; it is both ubiquitous and elusive.” That is, until a crisis hits.

During times of crisis, nationalism can quickly become very apparent. This is because it provides people with a powerful mechanism for channeling their fears and anxieties – emotions that are running high in the wake of Covid-19. Nationalism provides a roadmap for dealing with these feelings: retreat into our community, rally around our flag, help our own, look to strong leaders for guidance, and blame our problems on foreigners. Nationalism provides the necessary sense of community and purpose to weather trying times. We know this from looking back at history. Most often nationalism rises during war and economic hardship. Perhaps this is why politicians have been quick to talk about our response to the pandemic as a war against an invading enemy.

As the Covid-19 pandemic gathers strength, we therefore need to be alert to the perils of further embracing an exclusionary, inward-looking nationalist politics. However, this does not mean we need to reject nationalism altogether. There is another side to nationalism that can be particularly useful in this time of crisis.

Scholars have long pointed out that nationalism is not only a divisive ideology. It can also be force for inclusion and solidarity. In its inclusive, liberal variant, nationalism is one of the few ideologies that can truly cut across regional, economic, gender and cultural differences. Think here of the kind of liberal nationalisms that inspired the French to revolt against a tyrannical king in 1789, or of the countless anti-colonial, independence movements of the 20th century. The intense feelings of solidarity that these kinds of national movements generate is precisely what inspires people to support their fellow citizens in times of hardship. The building of social welfare programmes across the West after the Second World War were infused with a similar spirit of liberal nationalism. 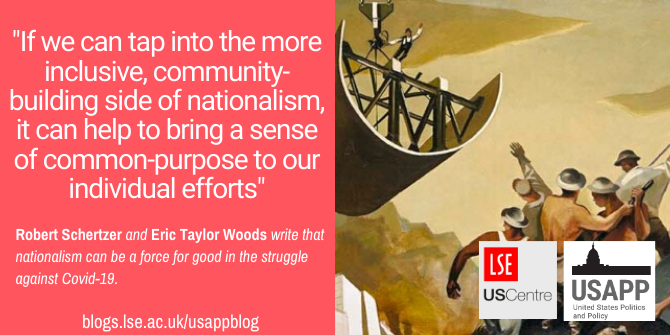 Nationalism can therefore be a powerful weapon in our arsenal to fight Covid-19. It is often said that nationalism can elicit such a powerful sense of community that it can motivate people to die on behalf of others they will never meet. It is this kind of solidarity that is needed in the ‘war’ against Covid-19. If we can tap into the more inclusive, community-building side of nationalism, it can help to bring a sense of common-purpose to our individual efforts. A more open, liberal nationalism also has a paradoxical power to facilitate international collaboration. Our current international order is the result of stable, sovereign nation-states being secure enough in their autonomy to band together. Nationalism and international collaboration do not need to be opposed.

There are indications that this other side of nationalism is emerging. We can see this in the unplanned expressions of empathy and gratitude to health care workers across the world, such as the weekly ‘minute of clapping’ that now occurs in many countries. Many thousands have also been inspired to volunteer in their communities, helping in any way that they can. Queen Elizabeth II encapsulated this approach in her recent address to the nation, reinforcing an inclusive and open vision for the UK. Acts such as these draw upon, and regenerate, the feeling that ‘we’ – the nation – are all in this together.

Perhaps where this sense of national togetherness is needed most right now is America. There, the spread of Covid-19 increasingly risks enflaming old divisions rather than bringing people together. This wasn’t the case during last major national crisis over 90 years ago, when the Great Depression gave rise to President Roosevelt’s ‘New Deal’ – a series of new programmes designed to help Americans in need, and reinvigorate the economy. Americans need to rediscover this spirit in the battle against Covid-19.

The main thing we can do right now to fight this virus is to shelter in place and avoid social contact. These actions come at great personal and economic cost. Nationalism can help convince people to do this for their fellow citizens and to help other countries in similar situations, while we wait for a vaccine and a return to normal.

Robert Schertzer – University of Toronto
Dr Robert Schertzer is an Associate Professor of politics at the University of Toronto. He researches and teaches on the intersection of federalism, constitutional law and the politics of national identity and diversity. With Eric Taylor Woods he recently published a pathbreaking study of Donald Trump’s Twitter usage during the 2016 presidential campaign in Ethnic and Racial Studies. They are currently writing a book on the ‘new nationalism’ in America and beyond.

Eric Taylor Woods – University of East London
Dr Eric Taylor Woods is a Senior Lecturer (Associate Professor) in Sociology at the University of East London. He researches and teaches in the areas of cultural and political sociology. With Robert Schertzer, he recently published a pathbreaking study of Donald Trump’s Twitter usage during the 2016 presidential campaign in Ethnic and Racial Studies. They are currently writing a book on the ‘new nationalism’ in America and beyond.