There has been a growing debate over restraint in US foreign policy, fueled most recently by President Trump’s removal of troops from Syria last year. But, writes C. William Walldorf, Jr., those who wish to see more restraint in US foreign policy face domestic challenges: partisanship, and the need to be seen to be against the other side, the desire by many Americans to uphold democratic values abroad, and the risk of being seen as “soft” on national security.

As the Covid-19 pandemic wanes in the coming weeks, debates among pundits and academics about the future of US grand strategy – especially around the controversial trend toward greater strategic restraint – are bound to resurface. Centered on the idea that a less activist foreign policy is better for US security, advocates of restraint press for a drawdown of US troops from forward bases, a reduction in US alliance commitments, and an end to militarism abroad, especially US “forever wars” in the Middle East. Today, those who push for restraint are buoyed by a sense of optimism that the idea is catching on at home: polls show the US public is tired of global leadership; President Donald Trump supports important parts of the restraint agenda; and leading 2020 Democratic Party contenders for the White House – including presumptive nominee former Vice President Joe Biden – have expressed sympathy for various aspects, especially about US militarism, of restraint as well.

Despite these optimistic trends, however, restrainers face a challenging future that could hinder their ability to bring lasting change to US grand strategy. Theory is one thing, application another. When it comes to grand strategy, the domestic politics of what can be done often confound even the best ideas of what should be done. Failure by restrainers to manage several domestic challenges today could leave them on the outside of policy debates looking in going forward.

Partisanship and the challenges to the politics of restraint

The first challenge is partisanship. Despite bipartisan support for some aspects of restraint, Trump’s highly polarizing presidency with its incessant use of wedge politics has also given restraint a distinct partisan home inside the Republican Party. Given today’s uniquely tribal negative partisanship in the United States (in essence, a deep dislike of those from the opposing party), strong pressure exists for Democrats in this election season and beyond to be the “un-Trump,” to essentially jettison the policies of the current administration simply because of their association with Trump and the GOP.

Take for instance the drawdown of troops from Syria. Despite the almost unanimous support among Democrats to end Middle East wars, nearly all of the Democratic presidential candidates repudiated Trump’s October 2019 decision to withdraw troops from Syria, which represents a major plank in the restraint agenda. In the negative-partisanship world of US politics, partisan identity trumps even bipartisan policy ideas. This is not good for restraint. 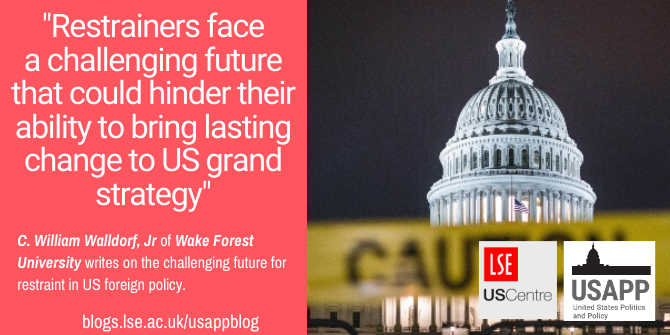 Photo by Andy Feliciotti on Unsplash

Neither is the fact that many of Trump’s most restraint-based policies do not sit well with the general US public. Polls indicate that the majority of Americans disapprove of Trump’s impetuous decisions to drawdown troops from Syria and Afghanistan, while even bigger majorities of Americans support US alliances like NATO, which Trump (in line with restrainers) frequently criticizes. In short, heading to the November elections, Democrats know they carry strong support with both their own partisan supporters and the general public when they oppose Trump on these issues. That spells potential trouble for restraint when Democrats retake the White House, which could come as early as January 2021.

Second, restraint has a values problem. Most restrainers are realists, meaning they think about the national interest exclusively through the lens of geopolitics. US citizens and many of their leaders do not reason this way, however. Power is important, but they also look at the world through the lens of their own identity and values.  Hence, even in times like today when restraint is more popular, standing for values abroad remains of interest to the public.

A recent survey found, for instance, that 87 percent of US citizens find it very or somewhat important for the United States to defend human rights abroad. In another poll, a majority said that democracy promotion should play at least some role in US policy. The same values trends show up when it comes to specific countries and policies as well. 79 percent consider China’s human rights policy either very or somewhat serious, while large majorities of Americans supported Trump’s 2018 airstrikes to punish Syria for the use of chemical weapons.

In general, restrainers are right to point to the dangers of over-expansion and militarism that come with a foreign policy too focused on promoting democracy and human rights. But, ignoring these issue altogether could cost them politically.

The political risk of being “soft” on national security issues

Third, restrainers face the danger of being labeled at home as “weak” or “soft” on national security. This may sound ironic given the attention restrainers give to power and geopolitics. Yet, across US history, this label has been politically devastating, at times, for advocates of restraint.

New research finds, more specifically, that these kinds of “soft” charges become especially damaging to restraint in historical moments when broad public narratives calling for the promotion and protection of liberal political order abroad are prominent in US national policy debates. Fearing that political rivals may get the upper-hand by appealing to these narratives, leaders (sometimes against their better judgement) often pursue aggressive policies abroad to measure up to standards set by narratives so as to avoid looking “weak” on national security. Fears of being labelled “soft on communism” at home pushed Presidents Harry Truman and Lyndon Johnson toward wars in Korea and Vietnam, for instance, against their better strategic judgement. Evidence also shows that worries of being labeled “soft on terrorism” after 9/11 played an important role in President George W. Bush’s decision to invade Afghanistan and Iraq as well as Barack Obama’s choice to militarily reengage in Iraq following the rise of ISIS. Nearly all of these wars defied policy proposals by restrainers at the time.

Today, the prospects for “soft” charges remain in the United States and could get even more pronounced in coming years. Drawing on the anti-terrorism narrative which is very much still with us, critics used labels like “calamitous,” “retreat,” and “choosing to lose” to decry Trump’s Syria decision last year. Trump capitulated to this pressure (against the wishes of restrainers) by leaving a residual force in Syria. Similarly, the heated anti-China discourse in the United States around Covid-19 is likely to strengthen an already nascent anti-authoritarian narrative that could spark a new Cold War in Asia. If this happens, good proposals by restrainers on the proper lessons of this pandemic will likely get sidelined and replaced instead by the kind of militarism, alliance commitments, and troop deployments that restrainers disdain most.

Overall, restrainers have had a positive impact on US policy debates over the past decade or so. However, a course correction is now in order. Specifically, restrainers need to distance themselves from Trump (as some already have) and build stronger ties across party lines; endorse at least some low-cost initiatives to protect human rights and promote democracy (something restrainers accepted early on, but have abandoned in recent years); and develop grassroots (as opposed to simply elite-focused) initiatives to generate more pragmatic, temperate thinking among the US public, rather than the panic and hysteria that usually comes with robust narratives for action abroad. These moves may not all lead to the policies that restrainers prefer. But, they are critical if restrainers wish to remain politically relevant, which is something the United States desperately needs in order to maintain sober judgement in the face of the strategic challenges – both old and new– that lie ahead.

C. William Walldorf, Jr – Wake Forest University
C. William Walldorf, Jr. is Associate Professor of Politics and International Affairs at Wake Forest University. This essay is drawn from (with Andrew Yeo), “Domestic Hurdles to a Grand Strategy of Restraint,” Washington Quarterly¸42, #4 (Winter 2020), 43-56. His most recent book is To Shape Our World for Good: Master Narratives and Regime Change in United States Foreign Policy, 1900-2011. He can be reached at walldocw@wfu.edu.