California’s ‘superstar’ cities and regions – which together make up nearly 90 percent of the state’s GDP – have experienced the highest number of COVID-19 cases. Maliha Ahmed writes that despite being hard hit, these superstar areas have a combination of industries which have been less affected by the pandemic compared to those in poorer areas. With both superstar and non-superstar areas experiencing nearly equal increases in unemployment since February, she argues that policymakers will need to target assistance to poorer areas to prevent rising inequality.

Although countries all around the globe have affected by the Covid-19 pandemic in different ways, the hardest-hit counties and metro areas are the ones that constitute the very core of the nation’s productive capacity. Taking the case of California, it is not surprising that the counties having the highest COVID-19 cases per capita are also the top contributors to the state’s GDP.  Apart from the devastating economic effects of the pandemic on unemployment and poverty, it might also change the level of inequality between California’s ‘superstar’ areas and other metropolitan areas.

Although we might be tempted to think that there will be convergence among superstar and non-superstar cities since the COVID-19 crisis hit ‘superstar’ metropolitan areas earlier and harder, this is not the case at all.

COVID-19 did not affect all industries equally in terms of profits, closure risks and job losses. According to a S&P Market Intelligence report which looks at the risk of default, industries such as the airlines, auto parts and equipment, casino and gaming, leisure facilities and oil and gas drilling were the most affected whereas industries such as property and casualty insurance, healthcare real estate investment trusts (REITs), multi-line insurance, life and health insurance and industrial REITs were the least affected. Since the richest areas in California have a higher percentage of people employed in the least affected industries whereas the poorer regions have greater percentage of people employed in the most affected industries it makes the poorer regions more prone and vulnerable to unemployment, poverty, crime and slower recovery from the crisis. 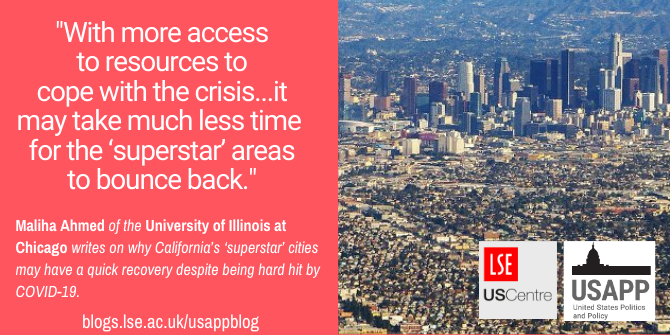 “Los Angeles, CA, with air you can’t see” by Ron Reiring is licensed under CC-BY-2.0 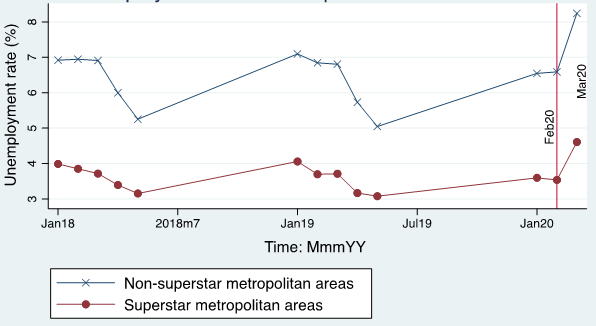 Over the next few months as the state recovers from the crisis, it might well be the case that the gap between ‘superstar’ metropolitan areas and the other metropolitan areas becomes even wider. With more access to resources to cope with the crisis, a larger share of employment in sectors that are less affected, a more educated workforce and better policies, it may take much less time for the ‘superstar’ areas to bounce back.

So unless policymakers turn their attention into formulating policies targeted specifically to help the ‘non-superstar’ cities recover faster in the aftermath of the crisis, we can only expect inequality between superstar areas and the other areas to increase.