Since they began, journalists covering the recent #BlackLivesMatter protests in the US have been subject to violence and intimidation. Paul Reilly, Anastasia Veneti, and Darren Lilleker write that while violence against journalists is nothing new, President Trump’s attacks on journalists and the press have likely motivated many of these attacks, at a time when political leaders should be expressing their support for First Amendment rights.

Journalists have been targeted by both police and activists during the recent Black Lives Matter (BLM) protests against the killing of George Floyd in Minneapolis, Minnesota on May 25th. The US Press Freedom Tracker received more than 279 claims of assaults on journalists between 26 May and 3 June, compared to the norm of 100-150 claims per year. In politically turbulent times, and with a presidential election on the horizon, those in power must stand up for those who hold them to account, or risk undermining democracy.

Photojournalists and broadcast crews, particularly black reporters, have put themselves at risk to cover BLM protests around the world in recent weeks. CNN correspondent Omar Jimenez and his crew were arrested while broadcasting live from protests in Minneapolis. Freelancer Linda Tirado was blinded in one eye by a plastic baton round fired by police in the same city. In Washington DC, a BBC cameraman was pushed by an armed police officer without any prior warning or reasonable explanation. In another incident which aired live on television, Australian Channel 7 cameraman Tim Myers was punched and hit by a shield-wielding riot police officer close to the White House.

Protesters have also targeted members of the press. Most notably, two Australian journalists were assaulted by members of the public while covering BLM protesters in central London. The attack on Nine News correspondent Ben Avery was captured live on air, as a group of men stole his microphone and pushed his cameraman Cade Thompson before a security officer intervened.

Violence against journalists is nothing new

These attacks are not a new phenomenon. A UNESCO report found that 495 journalists had been killed between 2014 and 2018, representing an 18 per cent increase compared to the previous five-year period. The Committee to Protect Journalists has frequently expressed concerns about threats to professional journalists in the United States, especially from far-right groups emboldened by President Donald Trump’s framing of mainstream media as ‘corrupt’, ‘dishonest’ and ‘fake news’. Organisations like Freedom House and Reporters Sans Frontieres have noted that press freedom continued to decline in the third year of the Trump administration, as demonstrated by the increase in arrests, assaults and threats reported by journalists.

There is a long history of photojournalists placing themselves in physical danger in order to document protests and civil unrest. Legendary combat photographer Don McCullin recounted in his autobiography Unreasonable Behaviour that British soldiers tried to attack him after seeing him among Catholic youths while covering rioting in the Bogside in Derry in 1972. Bangladeshi photographer Shahidul Alam received death threats in 2018 and was arrested for his coverage of the government’s response to student protests.

More recently, evidence from the anti-austerity protests in Greece between 2010 and 2012 revealed the perilous situations in which journalists often find themselves while attempting to capture what Susan Sontag refers to as “other people’s pain”.

Our study found that Greek photojournalists often positioned themselves between police and protesters in order to capture ‘newsworthy’ images. This meant that they were often the subject of unprovoked attacks and threats by both riot police and protesters, who believed they were colluding with the other side. 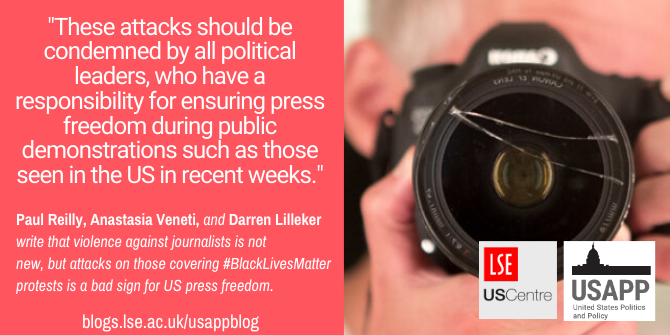 “Before: Broken UV filter” by Scott Schiller is licensed under CC BY NC 2.0

Nevertheless, they believed they had a moral duty to provide visual evidence of the injustices they were witnessing, especially in relation to the excessive force used by the MAT police, and to humanise protesters with whom they often had a lot of common characteristics and experiences. In this respect, there were ideological and market forces that determined the positions adopted by photojournalists during these protests and related riots.

In an attempt to raise awareness of police brutality against media workers, the Greek Union of Photojournalists displayed these images in an exhibition entitled “The News persecuted” held at the European Parliament in June 2013.

Photojournalists are unlikely to shy away from positioning themselves between protesters and the police in the near future. They feel it is their duty to produce images that document the events they are witnessing and accept that there is a risk to this activity.

That said, the police officers responsible for unprovoked assaults on photojournalists should be held accountable and prosecuted for their actions. These attacks should be condemned by all political leaders, who have a responsibility for ensuring press freedom during public demonstrations such as those seen in the US in recent weeks.

Conversely, Donald Trump appears to be doubling down on his attacks on the mainstream media, calling them “truly bad people” intent on fomenting hatred and anarchy in one recent outburst on Twitter.

This does not bode well for the safety of photojournalists in covering a presidential election year that, due to the coronavirus pandemic, will be like no other. In the past few days, both democratically elected governments, such as in Australia and Germany, and even non-democratic ones like Turkey, have condemned police attacks on journalists in the US.

Both Democratic and Republican political leaders have a responsibility not only to condemn these attacks in the strongest possible terms, but also to publicly express their support for journalists to exercise their First Amendment rights free from the harassment of police or protesters.

Images captured by photojournalists during the BLM protests have spoken truth to power. They have provided incontrovertible evidence of how peaceful protesters and indeed members of the press have been subjected to unprovoked attacks by the police. If democracy dies in darkness, as per the Washington Post’s slogan, then photojournalists undoubtedly provide much needed light.