With over 100,000 dead and well over 1 million cases, the US has been hit the hardest by the COVID-19 pandemic. Gustavo Palomares Lerma writes that while in the recent past, America has presented itself as a global leader, the Trump administration’s response to the pandemic – both at home and abroad – illustrates that it is now a power that is very much in decline.

The United States has often positioned itself a global leader, ready to fight global challenges. Yet, COVID-19 continues to wreak havoc on the US, causing devastation especially for the 43 percent of people living without any type of health insurance or with minimal protection from the government’s Medicare or Medicaid programs. The country’s weak welfare state and erratic policy response have only exacerbated the current crisis. Once described as a ‘beacon’ of values and the ‘model of models’ in 19th century French political scientist Alexis de Tocqueville’s Democracy in America, the crisis throws into stark relief what has been long developing: the American empire is declining.

It seems clear that in recent years, and especially during these weeks and months of death and confinement, changes are taking place in American society. Even before the onset of the COVID-19 crisis in the US, a considerable part of the middle class believed that there are unsustainable levels of inequality and that it is necessary to move towards a welfare state and more equitable system of social protection. This requires a new social contract to respond to a significant part of the citizenry that feels abandoned and unprotected in the face of the dramatic crisis caused by COVID-19. Inexorably, the current administration’s responses combined with existing systematic social and public health weaknesses have led to many human and material losses and have further called into question the United States’ global leadership.

The rise and decline of US world leadership

This leadership has lasted 120 years, if one starts with the military intervention in the Philippines in 1899. However, it could equally be said to have lasted 230 years, if dated even further back to the appointment of George Washington as President in 1789, when the first modern government and secretariat for foreign affairs in the US were set up. In any case, two centuries separate President Trump’s oath of office from James K. Polk’s doctrine of ‘Manifest Destiny’ and James Monroe’s Congressional address regarding the presence of Europeans on the American continent. Less time has passed since Wilson’s Fourteen Points, proclaimed at the end of World War I, to shape a new world order, or from Roosevelt’s ‘Speech of Infamy’ given after Pearl Harbor in December 1941. It has been just two decades since George W. Bush’s words shortly after September 11, 2001, declaring the War on Terror. In each of these pivotal moments, the United States was responsible for fundamentally shaping the international system. 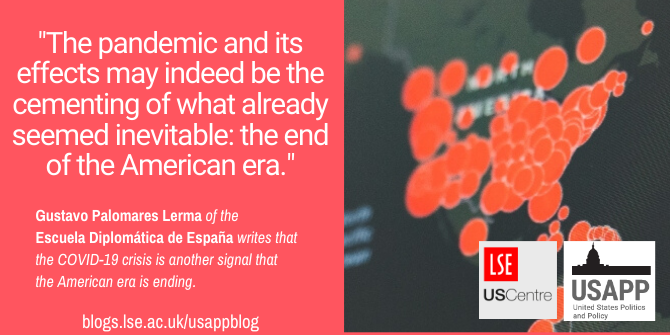 Given how the US government has responded to COVID-19 this pattern can no longer be taken for granted. The great paradox of the prevailing world power is that no actor can control everything in the face of a crisis. Thus, the US is still unable to coordinate a joint response to the pandemic and cannot be the catcher in the rye – i.e. the world’s savior – during the crisis. While President Trump and his administration prove themselves incapable of responding effectively to the crisis, the US is progressively losing its status as the global, agenda-setting leader.

The fundamental characteristic of the United States in this new era is the exercise of intermittent, non-existent and/or grotesque leadership, shown by Trump’s recommendations to mitigate the COVID-19 pandemic. Across crises, recent American foreign policy responses have been passive, reactive and disordered. Decisions are taken on a case-by-case basis, lacking an identifiable thread. This reflects the dilemma that faces modern US diplomacy: to return to time-tested, traditional ideals and values or to establish new principles for a world characterized many different powers and new dynamics such as pandemic outbreaks.

In the 21st century, the United States has demonstrated its inability to successfully face a series of new global ‘wars’, against radical terrorism as well as against the novel coronavirus. Both enemies have been able to strike on American soil and have exposed the great weaknesses of the US. In the face of these new challenges, the American government has been unable to adapt, resorting instead to old responses, each increasingly unfit for the new challenges the country faces. To COVID-19, the government has responded arrogantly by minimizing or excusing the number of deaths already caused. At over 100,000, the death toll is now much greater than the 60,000 killed during the Vietnam War, and is approaching – and has likely surpassed – the number of US military deaths in World War I. In the case of the other enemy, international terrorism, the US response has been uneven – engaging in new conflicts in arenas such as Afghanistan, Iraq or Libya, whilst opting for indifference in Syria which is witnessing the greatest war and humanitarian drama since World War II.

The need for global leadership in this time of crisis

In the changing international order of the 21st century, the United States cannot and does not want to withdraw from the world, but it also cannot and does not want to bear the political and economic cost of dominating it. There is no possibility in this international disorder of a return to the historical temptations of isolationism, however much Trump insists on doing so. But there is also no option for the US to continue acting as the undisputed leader of this new universal dis/order – the obvious savior to intervene in the numerous disputes on the planet. For the first time in recent history, the United States cannot ensure any kind of global governance.

The trauma that COVID-19 is causing to the international system as a whole is incredibly important. The mechanisms of global interconnectivity are in crisis; the European Union as an area of cohesion and solidarity is also being affected; and, lastly, many regions and conflicts threaten to veer toward chaos. In the face of this complexity, it is likely that international relations will once again come to resemble the system of European states of the 17th, 18th and 19th centuries, which were governed by the Peace of Westphalia of 1648, the post-revolutionary Coalitions of 1792 and 1798, and the 1814 Congress of Vienna, rather than the rigidity imposed by the doctrine of containment during the Cold War. We are witnessing the consolidation of great powers, supported each by their smaller, neighboring countries, and the affirmation of three large economic blocks that will determine all processes in their efforts to emerge from the post-pandemic economic crisis, and with China poised to emerge as a global power by 2030-2050.

A dangerous path for the United States and indeed the rest of the world is that of the authoritarian nationalism in the mold of Russian President Vladimir Putin and Chinese President Xi Jinping. The threat exists that, in the long-term, Trumpian politics will become the norm in the US and the Western world. This would signal the end of the period of globalization that we have been living through since the 1990s and would have many costs for the US. Trump’s vision for unilateralism in international relations entails a return to nationalism in political, commercial, and strategic relations. This would set up the United States and the world to follow a new and regressive doctrine, in a futile attempt to ‘wall themselves off’ from processes that already transcend borders, ideologies, and governments.

When the pandemic has been overcome and the hundreds of thousands of dead are buried, most of them workers and members the most vulnerable and marginalized groups, a revision of the American policy agenda must occur. The crisis will force a reckoning not only regarding foreign, but also domestic policy. This should include fundamental fiscal reform, and greatly increased social security provided by the US government. Furthermore, a public program to save large industries and small enterprises in crisis or bankruptcy emulating Roosevelt’s New Deal will need to be passed. This will be the only sensible response to the definitive failure of the current social model in mitigating the crisis caused by COVID-19.

The pandemic and its effects may indeed be the cementing of what already seemed inevitable: the end of the American era. And in this period of change we are witnessing, the greatest risk is that the United States itself is encouraging a resurgence of nationalism and populism across the world. The fundamental, if clichéd, belief of the Founding Fathers that the United States had the most complete democracy and the most just economic system in the world is being challenged. All these processes show to what extent this ‘ideal’ political, economic and social system, the fruit of Weber’s fabled Protestant ethic of hard work, and the spirit of capitalism, is in complete crisis.

Gustavo Palomares Lerma – Escuela Diplomática de España/ Universidad Nacional de Educación
Gustavo Palomares Lerma is a professor of US foreign policy at the Escuela Diplomática de España and dean of the Universidad Nacional de Educación a Distancia’s Faculty of Political Science and Sociology. He is co-author of the book Imperium, The Foreign Policy of the United States in the 20th and 21st Centuries [in Spanish] Tirant. 2019 .