Following the killing of George Floyd in May, ‘Defund the Police’ has become a rallying cry for many protestors in the #BlackLivesMatter movement. Sabine Kurtenbach and Nadine Ansorg look at what lessons can be learned from police reform in the Global South. They write that when searching for such lessons, the context of reform is important, as is the often need for the continuity of personnel, for consensus, and to ensure institutional accountability.

The death of George Floyd in Minneapolis, Minnesota, in May triggered protest movements in the US and across the world. People are taking the streets to protest police brutality, and for comprehensive reform or even the abolishment of police forces. In the US, this is not a new topic – since the Civil Rights Movement of the 1950s and 1960s, demands for police reform have been recurring. Yet tangible reform outcomes are yet to materialize.

In the past, other countries have introduced police reforms and even dismantled police forces – what can the US learn from these? Based on our research on security sector reform in postwar countries, there are some lessons for the US on police reform from deeply divided societies in the Global South.

Context is important when abolishing the police

First, our analysis shows that even police reforms from scratch – the abolishment of existing police forces and establishment of a completely new institution – are highly dependent on the societal context. Police reforms in Liberia or South Sudan have shown that even if the whole police force is abolished and replaced, it still acts within the societal and political environment of a deeply divided society which affects how the population perceives officers and the police force in the long-term. Trust in the force can then only be built up very slowly, and only alongside a holistic approach to governance that also tackles questions of education, health, and public spending. It might also mean that instead of punitive justice there should be more attempts of restorative justice, and a better reintegration of those who have had interactions with the criminal justice system into society. In the case of the US, this means that any attempt of police reform must tackle the broader aspect of structural racism that is evident in many areas of society, including education, health, or the judiciary.

Continuity of personnel is often needed

Second, new institutions need qualified personnel to be able to operate from the start. Therefore, and to avoid a policing vacuum, there will need to be a certain amount of continuity even if there is a purge and former officers are requested to reapply. In this transition period, the process is particularly vulnerable to political interference by reform opponents. El Salvador – a country praised for its comprehensive police reform in the mid-1990s – shows how and why old habits die hard. The police reform there was significantly undermined by a discourse on insecurity fueled by traditional elites who politically survived the war. In order to ensure effectiveness and coherence, these elites called for an inclusion of the military in police tasks, and for the promotion of former members of the military police to high civil police positions. This led to a dangerous militarization of the police, and eventually to an escalation of violence and one of the highest homicide rates in the world. At the same time, the dismissal of police officers that served under the old regime, as happened in Iraq after Saddam Hussein, can create a large pool of unemployed men who are trained in the use of force and violence, which can in turn create an even larger security risk. For the US, the question arises how much continuity should be allowed in a transition period, and if the reform process will be driven by elites or by civil society. This will have major implications for the outcome of reform.

“No Justice, No Peace” by Eden, Janine and Jim is licensed under CC BY 2.0

The need for consensus on the role of police

Third, the police are often the most visible arm of the government that provide an important link between the government, law enforcement, and its citizens. The reform of police can be contentious as it is not a technical issue but in fact a very political one. Profound reforms need a broad consensus on what the police is and how it is supposed to function. Options differ along a broad spectrum from policing as social control for populations (and even more in marginalized supposedly dangerous places) to policing as a community task to address law-breaking. While the former will prioritize efficiency, the latter will have a much more cooperative approach. Our research has shown that the civilian component is of utmost importance to build trust in the police amongst all members of the society. Evidence on police reform in Nepal for example shows that police need to be federalized to reach out to all parts of the society, and to ease regional, cultural and center-periphery tensions. A militarized police force such as in Guatemala, on the other hand, can deepen the divisions in a country, and might even be potentially used for repression by the government against minorities. A more civilian approach to policing includes also very strong limitations on the use of force, and the promotion of strong de-escalation strategies.

Fourth, accountability of the institution and its staff is a key element to create trust. Ending impunity ­- and the prevailing group identity which was called upon to hide transgressions – is the only way to make sure that members of the police are not above the law. In many postwar and post-authoritarian countries across the Global South past atrocities go unpunished. Without an effective judiciary, and the political will to bring perpetrators amongst the force to court, impunity is then a common feature that jeopardizes societal peace, as seen in El Salvador or the DR Congo. In the United States the “qualified impunity” that stems from the qualified immunity for police officers seems to play a similar role. Where members of the police do not have to face consequences for repressive policing, change will be hard to accomplish.

There is no perfect solution

Lastly, countless attempts to export Western policing models to post-conflict countries in the Global South have shown that police reform cannot be successful without considering where those reforms occurred and in what circumstances. There is no one-size-fits-all approach, and any police reform needs to carefully attend to specific context of historical legacies, gender, and race/ethnicity. This brings us back to our first point – the reform of the police alone will not bring sufficient tangible results. To be successful, reform needs to be broad and tackle injustices across the whole of society.

Police reform in the United States should not be reduced to the debate of defunding versus reforming the police. Security policies need a comprehensive approach emphasizing violence prevention and social inclusion of hitherto marginalized communities. The future quality of policing will depend on the political will at the local, state and national level to acknowledge that there are no second- or third-class citizens, and every citizen has a right to fair and respectful treatment under the rule of law when confronted by the police.

Sabine Kurtenbach – German Institute for Global and Area Studies (GIGA)
Sabine Kurtenbach is a political scientist, Lead research fellow at the GIGA Institute of Latin American and honorary professor at Philipps-Universität Marburg. Her research interests include post-war societies, peace processes, security sector reform and youth in Latin America and beyond.

Nadine Ansorg – University of Kent
Dr Nadine Ansorg is a Senior Lecturer in International Conflict Analysis and a Research Fellow at the GIGA German Institute of Global and Area Studies in Hamburg. Nadine’s research focuses in institutional reform in post-conflict societies, in particular security sector reform, the role of international state and non-state actors in these reform processes, and the conditions for establishing peace in divided and post-conflict societies. 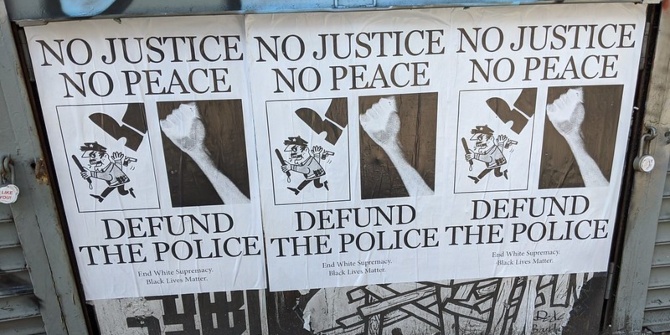