With fewer than three weeks until the 2020 presidential election, Donald Trump has continued his attacks against his Democratic challenger, former Vice President Donald Trump. Stephen Amberg writes that in attempting to win the White House, Biden must not only counter Trump’s authoritarian populist appeals, he must also defend and keep together his own party’s diverse coalition.

In the tumultuous 2020 presidential election campaign, Donald Trump has suggested that his Democratic rival, former Vice President, Joe Biden, will bring anarchy to the streets of America, abolish the suburbs, and even declare an open border with Mexico. Trump is a populist authoritarian demagogue, a figure that is largely (not entirely) outside the boundaries of American journalistic experience and public debate.

For the president, facts don’t seem to matter, and in some cases, neither do norms nor laws. He has already used his office and US military assistance to leverage electoral favor from the president of Ukraine, and has been warned repeatedly by US intelligence services about on-going Russian interference in American politics. Trump ignores these warnings because he’s advantaged by it, as he was in 2016, according to the Republican-led Senate Intelligence Committee report that was published in September. Trump can be reelected, as I predicted he could be elected on this blog four years ago. And while the Democrats are better positioned today than then, Biden and the party’s coalitions have serious weaknesses.

Since 2016 the Democrats have been able to cement a more left-of-center and therefore stronger coalition than Hillary Clinton’s, which had failed to resonate with key parts of those who had voted for Barack Obama: Black male voters in northern cities, white working-class voters in the industrial heartland, and young people. Biden has wisely moved left to solidify the so-called progressive wing of the party, which has mobilized impressively since 2016.

The party’s progressive wing has won state and local campaigns across the country, regardless of the state’s partisan leadership. They pushed back against anti-union right-to-work laws in Ohio and Missouri. They’ve won pay increases for millions of workers through Fight for $15 campaigns. They’ve won paid sick leave benefits in dozens of jurisdictions. Teacher strikes have won popular support for funding increases. Also, progressives have led campaigns to help felons find work and regain their voting rights, prevent wage theft, protect immigrant workers’ rights, reduce the class bias of the bail system, and stop racial profiling. Women have been leading activists, who get substantial credit for the 2018 Democratic Congressional victories. In fact, almost all of the Democratic candidates who vied for the party’s nomination last spring endorsed a more progressive agenda than Clinton’s.

The challenges facing the Democratic coalition in 2020

The weaknesses of the Democratic coalition are its still-untested capacity to work together to stay on message and turn out the vote. This spring and summer, Biden became the consensus candidate, but his record in office shows the strength and weakness of this role. Trump has already picked apart Biden’s record and will drive a critical narrative that the former Vice President is a career politician running against a straight-shooter businessman. Biden has the virtue of a professional who wants to get things done in Washington and is willing to make the deals necessary. The weakness of this is that deals are messy and even, in retrospect, sometimes awful. It’s not only Biden, but most of the leadership group of the Democratic Party who have this problem because they signed-on to the post-Reagan neoliberal policy consensus. They agreed to reduce the welfare rolls even if single mothers stayed in poverty, impose harsher criminal justice policies, free trade, deregulate finance, balance the budget, champion globalization, passively let organized labor’s stake in the economy dissolve, and extoll the internet economy as an easy fix. The Democrats also are weak on climate change compared to world leaders and have an incoherent record on undocumented immigration. Biden supported the wars in Afghanistan and Iraq.

When these weaknesses are pointed out during the campaign, will the novices in the Democratic coalition accept a flawed candidate in order to defeat Trump? Trump will remind the swing voters in the industrial states – as he did in his 2020 nomination acceptance speech on the White House lawn and as he did in the campaign versus Clinton in 2016 – that Biden has been a free trader and advocate for China’s entry into the world economy, whose actual effects have been massive manufacturing job losses. Promises to retrain middle-aged machinists in social service work won’t cut it with blue collar workers, even when the transition has worked. West Virginia, once the heart of the coal industry, now has more jobs in health care than coal, but the state is one of the most Republican in the country.

The problem for Biden Democrats is that fact-checking Trump is only a small part of the battle. Trump’s supporters don’t care about the facts. This includes the well-educated, well-off groups in the state Republican parties. The Republican Party did not adopt a platform at its convention for the first time in its 165-year history; it has become a cult of personality. Trump’s vision is that true Americans support him and everyone else is a threat. It’s an authoritarian vision that places a majority of Americans in the threatening group, whose votes can be suppressed.

So what can Biden do to get out the vote and win? What can Democrats do to win and win again to secure the institutional authority to change direction? Biden’s professionalism is an asset here, too, already on display in his position on fracking , which grandfathers Pennsylvania’s industry rather than endorse a ban. Similarly, he clearly rejected the slogan “defund the police”, which arose in response to police brutality against African Americans, even though the actual proposals are almost all geared to reallocating funding the police services to non-uniformed public employees.

Biden must deal with Trump’s “law and order” rhetoric

More difficult is America’s racial nexus, which is unraveling yet again after a hopeful spring. On the one hand, the police killing of George Floyd in Minneapolis in May was the spark for a remarkable anti-racist movement in dozens of communities across the US, big cities, suburbs and even rural towns without any Black residents. On the other, Trump has cast police reform as anti-police and a threat to white security. Trump’s resistance has given the alt-right time to counter-mobilize, with groups like the Proud Boys fomenting street fights in Portland, Oregon. A vigilante, who was welcomed by the police in Kenosha, Wisconsin, during violent protests against another police shooting of Jacob Blake, a Black man, killed two demonstrators.

This a decisive moment for the Biden campaign. He can’t win in November without a high turnout of Black voters, but street violence plays into Trump’s hands. Trump’s “law and order” slogan has worked for Republicans for decades, in part because Democrats caved in to the change of subject, as Elizabeth Hinton shows in From the War on Poverty to the War on Crime. Now, Biden must be fearless about racial justice and firm about national action to reform policing.

Leaving behind the “culture wars” in 2020

According to Stanley Greenberg’s polling, Joe Biden needs to do much better among white working-class and middle-class voters than Clinton, who lost them miserably compared to Obama. Greenberg does not expect Biden to win a majority, but he needs to get close to Obama’s numbers in order to win key industrial states. In the 2018 Congressional elections, the Democrats made strong inroads with middle class women by campaigning for health care after Trump failed to repeal the Affordable Care Act but threatened to cripple it. That is still a winning issue. Moreover, in the pandemic-induced economic depression, the Democrats have an opportunity to run hard for a job creating infrastructure program, which Congressional Republicans have blocked even though Trump campaigned on the issue in 2016. In short, economic security may be more important this year and crowd out the “culture war”, which has been a staple of Republican Party campaigns since 1992 and which figures prominently in Trump’s appeal.

Finally, the pitch to economic security should be wrapped in the flag. That is, like the limited reach of fact-checking for getting out the vote, an appeal to individual self-interest won’t work because that invokes Trump’s “circling the wagons” appeal to protect ourselves (propertied Republicans) from the “barbarians”. The Democrats’ appeal should be to fulfill the true meaning of the American creed, as Martin Luther King, Jr., put it, to form a more perfect union, a democracy with liberty and justice for all. This could be bland, but there is be a critical edge to that invocation: we can acknowledge but not be satisfied with the accomplishments of the American past and we’re not satisfied with the gross inequalities of race, class, and gender today. Americans can do better and “we’re up to it; we’re ready”, as Biden said in his acceptance speech at the Democratic National Convention. If he campaigns as a fervent believer among regular voters, he’s got a shot at victory.

Posted In: Elections and party politics across the US | Stephen Amberg 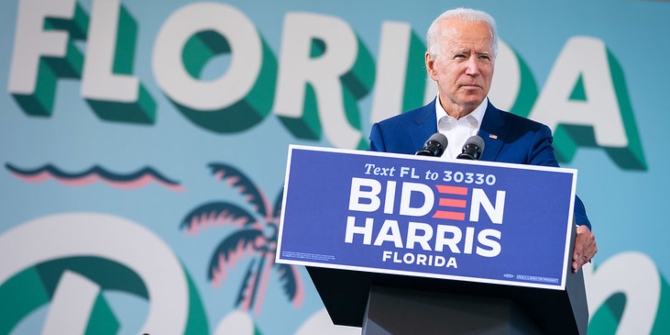 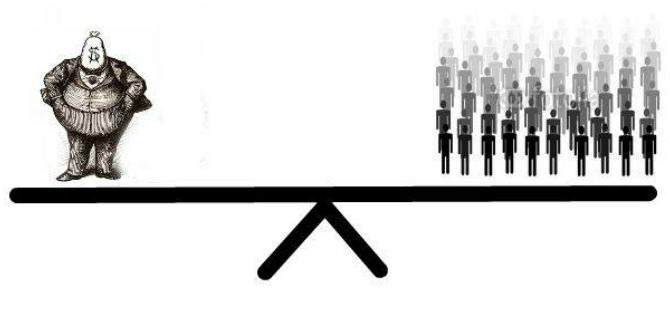