Ron Pruessen joins millions in celebrating Joe Biden’s victory in the US presidential election. He also worries about the potential of “Trumpism” to limit the lifespan of this renewed positivity in the months and years ahead – not least because this would echo past patterns in America’s political history.

Watching a recent webcast of Shakespeare’s play, Twelfth Night, I was struck by a mellow version of one of the play’s songs, which contains the lines: “Present mirth hath present laughter; What’s to come is still unsure.” For me, the words capture the uneasy mood of this specific moment in the troubled political history of the United States – the way real exhilaration prompted by Joe Biden’s victory is shadowed by a sense of fragility I’m finding it impossible to ignore.

Bring on the mirth and laughter, to be sure. Celebration is in order as we prepare to see race-baiting, xenophobia, and misogyny lose the turbo-power offered by the panoply of lies which will continue to occupy the White House until January 20. Hail too the likelihood of less Executive branch support for economic policies prioritizing the interests of the wealthiest Americans (including Trump enterprises); less perverse incompetence in dealing with COVID-19; less enabling of repressive impulses on reproductive and LGBTQ+ rights in some evangelical communities (and elsewhere).

We should, however, keep an eye on that other line in the Twelfth Night song: “What’s to come is still unsure.” Shakespeare’s worldview always encompassed triumph as well as despair, tragedy as well as comedy – along with mixtures of all. He would appreciate the precariousness Americans will be facing after this moment of joy. So would a great American poet, the one who crafted familiar lines with a somewhat hidden warning. “The woods are lovely” was the beginning of a message for Robert Frost in “Stopping by Woods on a Snowy Evening.” This was not the whole message, though. “The woods are lovely, dark and deep,” he elaborated. It’s a combination that warrants appreciation as we contemplate the months ahead.

“Dark and deep” developments are all too easy to imagine for the coming American winter – or, more’s the pity, for the years of the Biden presidency. At the least, there would be the free-range/open-carry license that has been given to COVID-19 by resistance to restrictions within both the Trump administration and swaths of the American public. This license will inevitably wreak yet more awful havoc and death before new leadership can slow the virus’s momentum.

Before and beyond the pandemic, as well, there are the forces now associated with “Trumpism.” Leaders who enabled the president will retain their positions in 2021: Senate Majority Leader Mitch McConnell (R-KY) and Lindsey Graham (R-SC) come immediately to mind. Other accommodating Senate Republicans are also surviving the 2020 election, regularly dding to the stubborn current refusal to recognize results. So too are Trump-supported court appointees (at every level of the judicial system) and Trump-inclined state governments.

A larger point here is that leaders become – and remain – leaders because they are elected. Seventy-four million Americans voted for Trump this year, twelve million more than in 2016. Although the incumbent’s supporters are no more a tightly unified cohort than the eighty million voting Democrats, and Biden is a man of eminently decent instincts, there is enough critical mass here to keep “Trumpist” impulses both alive and potentially disruptive or obstructionist for the next four years. This means there will be no easy way forward for those seeking reform or recovery for profoundly disturbing American problems involving race, class, gender, and sexuality.

Mirth for now, but challenges lie ahead for Biden

That challenging circumstances will confront the new president should not come as a surprise, even if the present mirth and laughter prompted by Biden’s electoral victory accentuate the wish that it was otherwise. Frost’s “deep” woods have too many counterparts in centuries of American political history – where patterns virtually never reveal unruffled transitions from one party’s control of the White House to another’s. Political parties inevitably entail clashes of values, priorities, and policies. Nor, distressingly, do the depths of the political past lack for times when “dark” would be another adjective to borrow from Frost. This has been especially true after periods in which liberal/reform transformation efforts lost momentum in the face of escalating resistance. 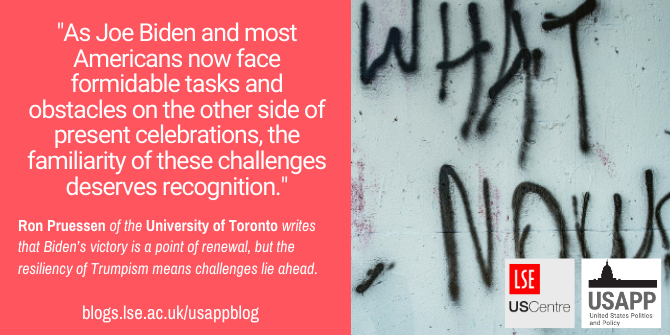 The deconstruction of Reconstruction in the 1870s undid the racial justice efforts of the Civil War and the 13th, 14th, and 15th amendments – paving the way for government-sanctioned “Jim Crow” practices that stained American lives for decades. (In 1869, the escaped slave turned abolitionist and renowned author Frederick Douglass happily wrote “I seem myself to be living in a new world” – doubtless somewhat unconscious of the way that word “seem” would shortly gather force.)

Conservative Republican “normalcy” in the 1920s stalled the clock on Progressive Era economic and social reforms, compounding that by enacting severe immigration restrictions and tolerating a resurgent Ku Klux Klan. The decade also saw foreign policies strongly tilted toward economic nationalism (high tariffs) and political distance from the multilateral potential of the League of Nations.

By the 1970s, Lyndon Johnson’s Great Society initiatives – already suffering from the self-inflicted wounds of the Vietnam War – met further reverses as conservative (and reactionary) forces gathered strength. Richard Nixon’s “southern strategy,” in particular, used barely veiled race messaging (and “law and order”) to give Republicans a tool for electoral success still being wielded half a century later.

As Joe Biden and most Americans now face formidable tasks and obstacles on the other side of present celebrations, the familiarity of these challenges deserves recognition. The country has been here before and those seeking more social and economic justice – “more perfect union” – kept pushing forward. “Present laughter” didn’t translate into a lack of stamina and patience. Nor did admiration for lovely woods filling up with snow: as Frost wrote in ending his poem, “But I have promises to keep/And miles to go before I sleep.”