As partisan news networks like Fox News and MSNBC have risen in popularity, so has the polarization of many Americans’ political views. In new research, Jay Hmielowski, Myiah Hutchens, and Michael Beam find that while both liberal and conservative media contribute to polarization, conservatives are more likely to be part of a media echo chamber, trusting fewer sources and seeking information from a narrower range of news outlets.

Have you rolled your eyes at those who are wearing masks in public? Or do you involuntarily grimace when you see a MAGA sign? These reactions are increasingly common in an environment where beliefs have become more polarized. Increases in polarization have dove-tailed with the rise of partisan 24-hour news networks like the conservative Fox News and liberal MSNBC and fragmented internet news sites that cater to specific political beliefs. People who study political communication have long argued that the increasingly partisan news environment is related to partisan beliefs. Our recent study aims to disentangle these relationships by studying media use and polarized attitudes.

We looked at how these relationships developed over time using a three-wave panel study collected by the survey firm YouGov in the lead up to the 2016 US presidential election. We measured data just after the political conventions in July, just after the Presidential debates in October, and the week before the general election. During each wave we asked how frequently participants used various media outlets and their views on three politicized issues: immigration, guns, and law enforcement. 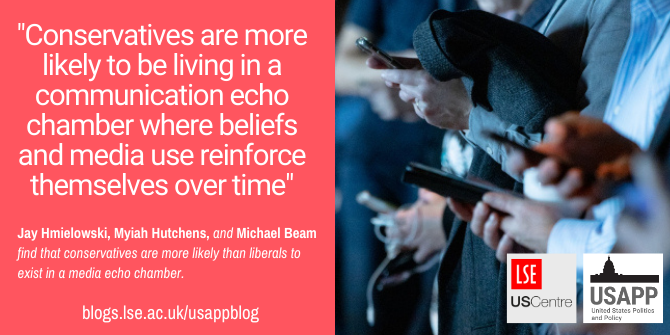 Photo by camilo jimenez on Unsplash

Our most important finding is whether beliefs and use create what is known as an echo chamber, a space where the reinforcing effect of media and beliefs drive people to wall themselves off from a wider range of media. Our results did not find evidence that liberals live in a media echo chamber. Indeed, there may not be an echo chamber for liberals because they are consuming a wider range of views. Research has shown that liberals tend to report higher levels of trust in media, generally, and higher levels of trust in more outlets compared to conservatives. Therefore, although attention to liberal media sources could lead certain people to hold more extreme attitudes, these attitudes do not seem to increase use of partisan media because they could also consume other outlets that breaks this reinforcing process.

By contrast, our results did find a reinforcing relationship between conservative beliefs and media use. Other scholars have shown that conservatives tend to trust fewer media sources, which likely results in them in consuming a narrow range of news outlets. As a result, conservatives are more likely to be living in a communication echo chamber where beliefs and media use reinforce themselves over time. Evidence that suggests conservatives are higher in personality traits such as closemindedness may also help explain this reinforcing relationship.

While we demonstrate that we have reasons to be concerned about potentially polarizing effects of both liberal and conservative media, the larger concern is that conservative seem to be living in more of a communication bubble than their liberal counterparts. Prominent conservative media, like the thriving conservative radio ecosystem, has existed in the United States for much longer than prominent liberal media; therefore, it could be that conservatives simply have a head start in creating these closed communication circles. If liberals do catch up, our ability to work together as citizens, rather than as opposing ideological combatants, might continue to diminish.

Jay Hmielowski – The University of Florida
Jay Hmielowski is an Assistant Professor in the Department of Public Relations at the University of Florida. His research interests include environmental, science, and political communication. He is interested in understanding why different messages are effective or ineffective at changing people’s attitudes and beliefs associated with various environmental, science, and political issues. He is also interested in how people’s attitudes and beliefs affect their information seeking behaviors.

Myiah Hutchens – The University of Florida
Myiah Hutchens is an assistant professor in the Department of Public Relations at the University of Florida. Her research interests focus on political communication. Specifically, her work centers on how communication functions in democratic processes – that is, to help or hinder political processes. Her research generally focuses on what leads people to seek out diverse perspectives – particularly views they disagree with – and how individuals then process that disagreement.

Michael Beam– Kent State University
Michael Beam is the director of the School of Emerging Media and Technology at Kent State University. His research investigates the impact of media systems on the process of information creation, exposure, and processing. His research has focused on the impact of information systems using personalized algorithms on news exposure and health communication, the influence of partisan media sources on political polarization and political information processing, and how new media systems change information distribution patterns.