For many political candidates, ambiguity can be a way to appeal to a larger number of voters. During the 2020 Democratic presidential primary, it was suggested that now Vice President, Kamala Harris, had been ambiguous on her stance on private healthcare insurance. In new research using survey data, Elizabeth N. Simas investigates whether this ambiguity affected Harris’ popularity. She finds that Harris’ ambiguity may have actually increased the favorability of other candidates such as Senator Elizabeth Warren among voters who are more accepting of risk and who prefer government-run insurance.

During the second night of the first round of the 2020 Democratic presidential primary debates in June 2019, Vice President Kamala Harris (then California Senator) was one of only two candidates to indicate that she would abolish private health insurance. But in a televised interview the next day, Harris backtracked, stating that she had misunderstood the question.

This was not the first time that Harris’ position on healthcare appeared to some to be muddled, and even after releasing a plan for a gradual transition away from private insurance, she continued to be attacked based on the perception that she was straddling the fence. So although conventional wisdom suggests that Harris’ ambiguity should have helped her by broadening her appeal, this failure to be seen to have clearly defined a position is frequently cited as one of the reasons that her presidential campaign stalled before the first primary votes were even cast. Drawing on the results of a survey experiment conducted early in the 2020 primary season, my research offers more support for such claims, as my results suggest that ambiguity may have done Harris more harm than good among Democratic primary voters.

The effectiveness of ambiguity

In theory, ambiguity can potentially aid candidates by allowing them to appear to agree with a greater number of voters. That is, when Harris raised her hand on that debate stage, she clearly signaled that those who wanted to keep their private insurance plans would be better represented by a different candidate. But when the Harris campaign obscured that position in the days that followed, they may have won over some who preferred private insurance by creating the possibility that such plans would be kept.

However, the effectiveness of ambiguity vs. being clearly for a government-run plan should be contingent on a voter’s acceptance of the uncertainty of the statement and the risks associated with policy change. In the case of healthcare in the US, abolishing private insurance should be seen as the riskiest option since it involves a great deal of change with unknown consequences. Thus, Harris’ ambiguity should have been most effective among the risk-averse who oppose a government-run plan. For these individuals, the safest and most preferable version of Harris’ stance was the one that would potentially allow them to avoid a change.

But for those who are more willing to accept risk and desire the change to a government-run plan, Harris should have been most attractive when she clearly stated her opposition to private plans. Although these individuals should be more comfortable with gambling on an ambiguous statement, in this instance, the gamble would be against their own preferences.

How do primary voters react to ambiguity and clarity?

To test this, I embedded an experiment within a September 2019 survey of over 2000 US adults. Here I focus only on the 970 Democratic subjects in my sample, as they are most relevant to a discussion in the 2020 primary election.

The survey experiment presented information about the healthcare positions taken by Harris, Joseph Biden, and Elizabeth Warren, who were three of the top four Democratic candidates when the survey was launched. All subjects were told that they would be seeing the issue positions of three of the current frontrunners in the 2020 Democratic Presidential Primary. They were then randomly assigned to see one of two charts that contained real statements from the candidates.  In both, Biden was clearly against Medicare for All and Warren was clearly for it. The experimental manipulation was whether Harris’ position was shown as clearly for Medicare for All or as ambiguous.

As expected, ambiguity significantly boosted Harris among those who were risk-averse who favored private insurance. The predicted probability of selecting Harris over the other two candidates increased from 11 to 43  percent when these individuals were shown the ambiguous statement vs. the clear statement.

Yet even though ambiguity does appear to help Harris in some instances, these results should be considered in conjunction with how Democratic voters actually feel about healthcare. Polling from this time showed that over 80 percent of Democrats felt the government has a responsibility to ensure Americans have health coverage. And for those in this large group who were more accepting of risk, ambiguity raised the predicted probability of choosing Warren from 48 to 61 percent. With this in mind, my findings suggest that Harris’ ambiguity may have done more to boost the relative attractiveness of Warren than it did to help her own chances of winning the nomination.

“Kamala Harris” by Gage Skidmore is licensed under CC BY SA 2.0

This is also evident when looking at subjects’ ratings of the relative favorability of the candidates, which is shown in Figure 1. Positive values indicate that subjects in that group rated Harris higher than the indicated opponent, while negative values indicate subjects in this groups rated Harris lower than the indicated opponent.

Democratic voters are more likely to support clarity on healthcare

We can see the biggest differences between clarity and ambiguity among those who are more accepting of risk who prefer government-run insurance (bottom right-hand quadrant). Whether comparing Harris to Biden or Warren, individuals rated Harris higher when told her position was clear but lower when they were told her position was ambiguous.

Ambiguity also lowered Harris’ favorability relative to Trump. While ambiguity did not hurt Harris enough to push voters over to Trump, it still narrowed the favorability gap by over 10 points. This is important, because it has implications for Harris’ general election prospects; the probability of turning out to vote decreases as the gap between impressions of candidates decreases.

Overall, it appears that ambiguity vs. a clear position in favor of Medicare for All lowered Harris’ support among those who are more accepting of risk who favor the government plan without offering fully offsetting gains among those who preferred to maintain some form of private insurance. This example does have some limits that need to be acknowledged. Notably, Harris was flanked by clear alternatives on either side. Ambiguity may have more effects in situations where alternatives are also somewhat ambiguous or where one of the possible outcomes is not represented.

But even when considering potential caveats, my results still reinforce the idea that determining whether or not ambiguity is beneficial is complex. When choosing a rhetorical strategy, candidates and their campaigns should be very careful to consider both the nature of the target electorate and the other choices available to them.

Elizabeth Simas – University of Houston
Elizabeth Simas is an Associate Professor in the Department of Political Science at the University of Houston. Her research focuses on the attitudes and behaviors of both voters and candidates in US elections. Her work has recently been published in such outlets as the American Political Science Review, the Journal of Politics, Political Behavior, and Public Opinion Quarterly. 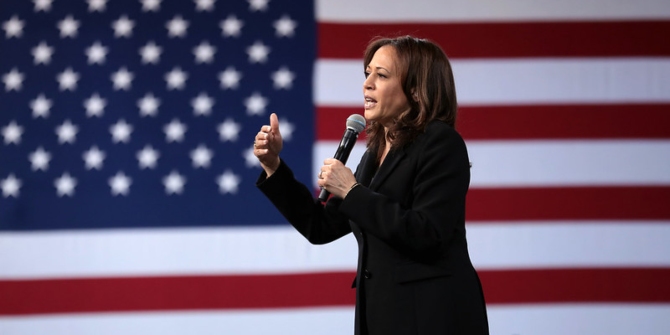