The US Capitol insurrection on January 6th was an attempt to maintain white supremacy, motivated by a fear of status loss. Megan Stewart and Karin Kitchens write that such violent reactions to maintain white supremacy are not new in the US. Examining data from the post-Civil War Reconstruction period of the 1860s and 1870s, they find that measures like the deployment of Union troops can be linked to increased literacy for Black persons, but also to an increase in the number of Black persons murdered by white lynch mobs threatened by fear of status loss.

In March 2021, the director of the Federal Bureau of Investigations, Christopher Wray, testified to the Senate that the FBI “expected racially or ethnically motivated violent extremists, anti- government or anti-authority violent extremists, and other domestic violent extremists citing partisan political grievances will very likely pose the greatest domestic terrorism threats in 2021 and likely into 2022.” Likewise, scholars have concluded that the violence at the Capitol on January 6 reflected an attempt to maintain white supremacy, or argued that the fear of increasingly diverse communities motivated the behavior of participants in the Capitol violence. As a whole, white political behavior is often motivated by fear of status loss.

While these scholarly and policy conclusions apply to what’s happening now, the roots violence from people (as opposed to from institutions) to maintain white supremacy are not new and have far deeper origins. In recent work we investigate white supremacist violence in the aftermath of Reconstruction after the United States Civil War.

The goals of Reconstruction and measuring progress towards them

The aim of Reconstruction (which took place between 1865 and 1877) was not just about ending enslavement. At a minimum, Reconstructionists sought to ensure the self-sufficiency of former enslaved persons, if not also securing a degree of political power (though not necessarily social equality). Reconstruction was a complex and multifaceted process that involved federal troop deployments across the South, military control of territories under rebellion, the reconstitution of southern constitutions often written and created in large part by male Black delegates previously excluded from political bodies, and the provision of a wide range of services delivered through the government or civil and religious groups.

These various elements of Reconstruction predominantly offered both material and conceptual assets, such as schools, health care, information on legal and political rights to former enslaved persons. These elements of Reconstruction also created a protected space for typically former enslaved persons to wield such assets (e.g., physical infrastructure, institutions, or protection). Former enslaved persons then activated these assets and institutions by attending schools, exercising political rights, negotiating contracts, investing in property and business opportunities or holding office. The cumulative result, we argue, was progress toward Reconstruction’s goals, though these goals were not wholly achieved.

We test our argument about progress toward Reconstruction’s goals by focusing on Union troop deployments across the South. Union troops, especially Black Union troops, actively helped organize and mobilize former enslaved persons, educating them about their rights and encouraging civic engagement. At the same time, Union troops provided space and protection from white enslavers. Union troops were not deployed evenly across southern counties, however, which allows us to measure variation in exposure to the enforcement of Reconstruction’s policies. We then measure advancement towards Reconstruction’s goals by assessing county-level changes in literacy rates among Black persons and relative changes in differences in literacy rates between Black and white persons.

Unfortunately, the story does not end there. We argue that gains in relative status made by former enslaved persons during Reconstruction could trigger resentment and vengeance among white persons whose status was threatened and challenged by social and political advancements made by Black communities. Such sentiments are often the impetus for interpersonal violence. We therefore expected that in places where Black persons made the greatest social gains relative to whites during Reconstruction, white persons were more likely to rely on interpersonal violence to reclaim or preserve white supremacy after Reconstruction.

We tested our argument about violent white backlash by assessing the relationship between the deployment of Union troops on the number of Black persons murdered by white lynch mobs in southern counties. We also directly test our mechanism by assessing whether changes in Black literacy rates over one period led to an increase in the number of Black persons lynched by their white neighbors afterwards. We find that both counties with Union troop presence and counties that made greater gains in Black literacy rates are associated with more Black persons murdered by white lynch mobs. 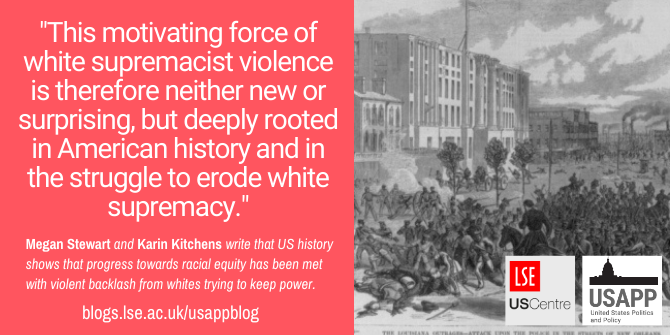 New Orleans 1874, during post-Civil War Reconstruction period. Clash between the (racially integrated) Police and the (segregationist) White League on Canal

What does our research suggest in a contemporary context? Certainly, the conclusions of scholars and policymakers alike seem to suggest that the threat of status loss relative to Black persons, Indigenous persons or other persons of color remains a motivator of white political behavior and white supremacist violence. This motivating force of white supremacist violence is therefore neither new or surprising, but deeply rooted in American history and in the struggle to erode white supremacy.

Furthermore, our research suggests that, as progressive and leftist legislators and organizers continue to advocate for policies that abolish or mitigate systemic inequalities – such as aid to Black, Indigenous and other farmers of color under the American Rescue Plan, defunding the police or reparations – fears of status loss and resentment among whites toward beneficiary communities could be exacerbated. Simply because a person fears status loss does not necessarily mean that person will become violent – something that is predicated upon a complex mix of institutional and psychological factors – but it could increase the potential for violence against beneficiary communities by white persons. Of course, in no way should fears about backlash mean that we should abandon efforts to abolish or mitigate unequal social structures. Rather, it means that non-violent and violent resistance by white persons towards BIPOC communities in response to such efforts may arise, and that policymakers should plan and anticipate accordingly.

Megan A. Stewart – American University
Megan A. Stewart is an assistant professor in the School of International Service at American University. Her research focuses on how political actors transform and create social orders, focusing especially on civil wars and revolutions. Her book, Governing for Revolution, has recently been published with Cambridge University Press, and she has published articles in International Organization, Journal of Politics and the Journal of Conflict Resolution, among other outlets.

Karin E. Kitchens – Virginia Tech
Karin E. Kitchens is an assistant professor in the Department of Political Science at Virginia Tech. Her research interests focus on the politics of public education and effects of segregation and diversity on public good investment. She has recently published in the Journal of Politics, State Politics & Policy Quarterly, and Social Science Quarterly, among other outlets.