Many cryptocurrency exchanges are now making proud claims about their regulated status, but does “regulated” really mean what investors think? Martin C.W. Walker and Winnie Mosioma review 16 leading exchanges to find out.

Cryptocurrency exchanges have long been subject to controversy, mostly in relation to the numerous incidents of hacking and issues related to anti-money laundering controls. Regulatory focus, however, is slowly turning to their core activity, trading. In March 2021, the Commodity Futures Trading Commission (CFCT) issued an order filing and settling charges (including a $6.5 million settlement) against cryptocurrency exchange Coinbase for “reckless, false, misleading, or inaccurate reporting as well as wash trading” on its GDAX platform. Other leading cryptocurrency exchanges investigated for their trading practices include Bitfinex and Binance.

Conventional platforms for trading securities, foreign exchange, derivatives, commodities and other more conventional financial assets are strictly regulated, whether they are officially classified as exchanges or alternative trading systems (ATS). An ATS, while not strictly a stock exchange, has to follow the regulations that apply to either exchange or broker-dealers depending on a number of criteria (varying between jurisdictions), such as the volume of trades and market share. Whatever the classification, conventional trading platforms have to follow strict rules designed to protect investors and avoid destabilisation of the financial system. Particularly rules that require a high level of transparency and guaranteeing operational resilience.

A fundamental flaw in the design of Satoshi Nakamoto’s infrastructure for the original cryptocurrency, bitcoin, was the lack of any obvious way to interface it with existing financial infrastructure; notably to facilitate the exchange of bitcoin for conventional currencies such as dollars, pounds and euros. A gap that did not exist in bitcoin’s digital currency predecessors, e-gold and the Liberty Reserve dollar. Both of which had networks of independent exchanges from the outset and both of which were closed down following legal and criminal prosecutions. It took 18 months from bitcoin’s going live to the creation of the first independent exchange, bitcoinmarket.com, which allowed bitcoin to be traded for dollars. Unlike Liberty Reserve or e-gold, bitcoin (as a currency rather than a platform) was not linked in value to any real-world asset. This meant cryptocurrency exchanges did not just exchange cryptocurrency and conventional currency for a fee, they had to facilitate the trading between multiple parties to establish prices, like a stock exchange.

Given the fundamental role played by cryptocurrency exchanges in the overall crypto ecosystem and the growing degree of entanglement between crypto and conventional finance, it is important to not just understand whether crypto exchanges are regulated but how they are regulated. To understand the current picture of regulation, we carried out a qualitative review of 16 leading exchanges (see Table 1) including the seven that contribute prices to the CME Bitcoin Reference Rate, which benchmarks the daily cost of one bitcoin in US dollars and is used to calculate the prices of bitcoin futures on the Chicago Mercantile Exchange, an activity regulated by the Commodity Futures Trading Commission (CFCT).

The review uncovered a patchwork of regulation and, in some cases, its complete absence. Leading exchanges identified from the March 2021 ranking found at Cryptocompare.com include: Coinbase, Binance, Gemini, Bitstamp, Kraken, itBit, Luno, Cex.io, Liquid, LMAX Digital, Bitfinex, eToroX, Bitflyer, Currency.com, Bittrex, OKCoin. Identifying the regulatory status of these platforms often proved challenging given their complex corporate structures. Of the 16 leading platforms investigated, just four were found to be subject to a significant level of regulation related to trading.

itBit, a US-based exchange with an estimated daily trading volume of almost $12 million (one of the smaller exchanges), is arguably the most secure, with oversight from the New York Department of Financial Services (DFS) and registration as a bank. This means that the exchange is subject to the provisions of the US Bank Secrecy Act (BSA), the US Patriot Act, and the General Regulations of the Banking Board. eToroX and LMAX Digital operate as multilateral trading systems, are under the supervision of the German Federal Financial Supervisory Authority and the UK’s Financial Conduct Authority (FCA) respectively. However, the fundamental reason for that supervision related to more conventional activities in FX and equities, rather than cryptocurrencies. Belarus-based exchange Currency.com is subject to comprehensive controls on transaction reporting, suspicious activity monitoring, AML requirements, and even fair advertising rules, which are on par with Belarusian-domiciled securities exchange businesses. Belarus, though, is not exactly a leading financial centre.

Seven of the remaining exchanges operate as licensed Money Service Businesses (MSBs) or equivalent – including the ubiquitous Coinbase. This means that they must register with the Financial Crimes Enforcement Network (FinCEN) in the US, and/or the Financial Conduct Authority (FCA) under the Payment Services Regulations 2017 in the UK. It does not mean their trading activities are regulated.

At the other end of the spectrum, three of the top exchanges appear not to be subject to any regulatory scrutiny whatsoever. The Liechtenstein-domiciled Bittrex, Singaporean Luno, and British Virgin Islands-based Bitfinex are unregulated entities and are not licensed by any major international bodies. This is despite the fact that Bitfinex suffered a hack in 2016 which led to the loss of some $72 million in bitcoin. The event led to the handing down of an order by the United States Commodity Futures Trading Commission (CFTC), which notably was not capable of compelling Bitfinex to take any affirmative action.

While registration of exchanges may give investors some comfort, the focus of the regulators is generally on anti-money laundering (AML) and due diligence measures – not trading. In the UK, cryptocurrencies are only regulated for money laundering purposes, and there is no wider framework governing the activities of exchange platforms, except where they cross the line into other areas of regulated financial activity.

Many of these exchanges also proudly advertise their possession of a distributed ledger technology licence from the Gibraltar Financial Services Commission. This is heralded as a mark of legitimacy and respectability by the likes of Cex.io, but in practice there appears to be very little by way of ongoing scrutiny once authorisation has been granted.

Given the lack of significant regulatory oversight of actual trading activity it is probably no surprise many cryptocurrency exchanges carry out questionable activities, such as offering leverage to their clients and wash trading, all against a context of unexplained system outages during times of market instability. Reasons for regulatory intervention in the conventional world. Few exercise any form of mitigation against market abuse, while some have even been accused of trading against their clients in what economist Nouriel Roubini has compared to a casino dealer betting against a gambler whose cards they have seen.

Cryptocurrencies now form a major asset class with a notional value of $1.77 trillion as of March 2021, with investments being made by publicly listed companies such as Tesla and MicroStrategy and a greater willingness of major financial institutions to offer cryptocurrency related services. However, the regulatory framework within which it exists is highly concerning. In general, cryptocurrencies lack anyone that is genuinely accountable for core processes such as transfers of ownership, trade validation and creation of cryptocurrencies. A concern that can ultimately only be dealt with by acceptance of the situation or outright bans. However, the almost complete lack of regulation of the highly centralised cryptocurrency exchanges should be an easier-to-fill gap. Regulated entities relying on prices from “exchanges” for accounting or calculation of the value of futures contracts are clearly putting themselves at significant risk. At least until cryptocurrency exchanges are subject to the same regulatory oversight as other financial markets.

Martin C. W. Walker – Center for Evidence-Based Management
Martin C. W. Walker is director of banking and finance at the Center for Evidence-Based Management. He has published two books and several papers on banking technology. Previous roles include global head of securities finance IT at Dresdner Kleinwort and global head of prime brokerage technology at RBS Markets. He received his master’s degree in computing science from Imperial College, London, and his bachelor’s degree in economics from LSE. 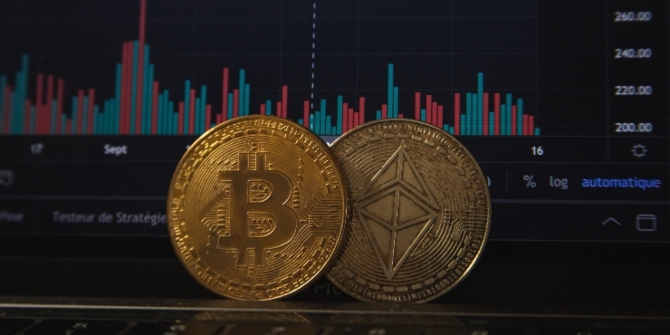