The shares of GameStop rallied in January after discussions on the social media site Reddit led to a wave of buying of the videogame and consumer electronics retailer’s stock. Valentina Semenova and Julian Winkler study the implication of the use of trading apps and forum discussions among retail investors and write that it is unlikely that this new `modus operandi’ will simply disappear. They say it is important for researchers and policymakers to get ahead of the curve. A delay to a critical assessment of retail investor herding threatens to destabilise markets further.

It would have taken a little over 750 thousand individuals, each with $1,000 in cash, to buy all floating shares of GameStop at its early January price of $17.25 per share. Despite the coordination challenge, the price of GameStop equity rose by a factor of ten between 22 and 28 January 2021. Is this a one-off fluke, or a permanent change for financial markets to contend with?

Social media has changed the fabric of society. Polarisation, the spread of fake news, and other societal challenges are some of its documented consequences (Tucker, 2018). As many as 4.20 billion people, or 53.6% of the world population, are active social media users, each just a few clicks away from the next popular phenomenon. Now, a growing audience turns to social media for promising stock market gambles.

Our research sheds light on the social dynamics driving a new way of investing. In particular, we use text data from the r/WallStreetBets site to­ ­follow the investment choices users talk about, and who they talk with. r/WallStreetBets started its ascent to popularity in 2015, incidentally the same time the popular trading app Robinhood became available.

Qualitatively, users are galvanised by the behaviours of their peers and their skyrocketing account balances, which they share freely. It is clear that popularity begets popularity: they discuss an asset because others talk about it already, instead of any inherent value. Figure 1 displays the evolution of interest in popular tickers on WallStreetBets (WSB): an initial group of users attracts a greater following, until eventually interest dies out. 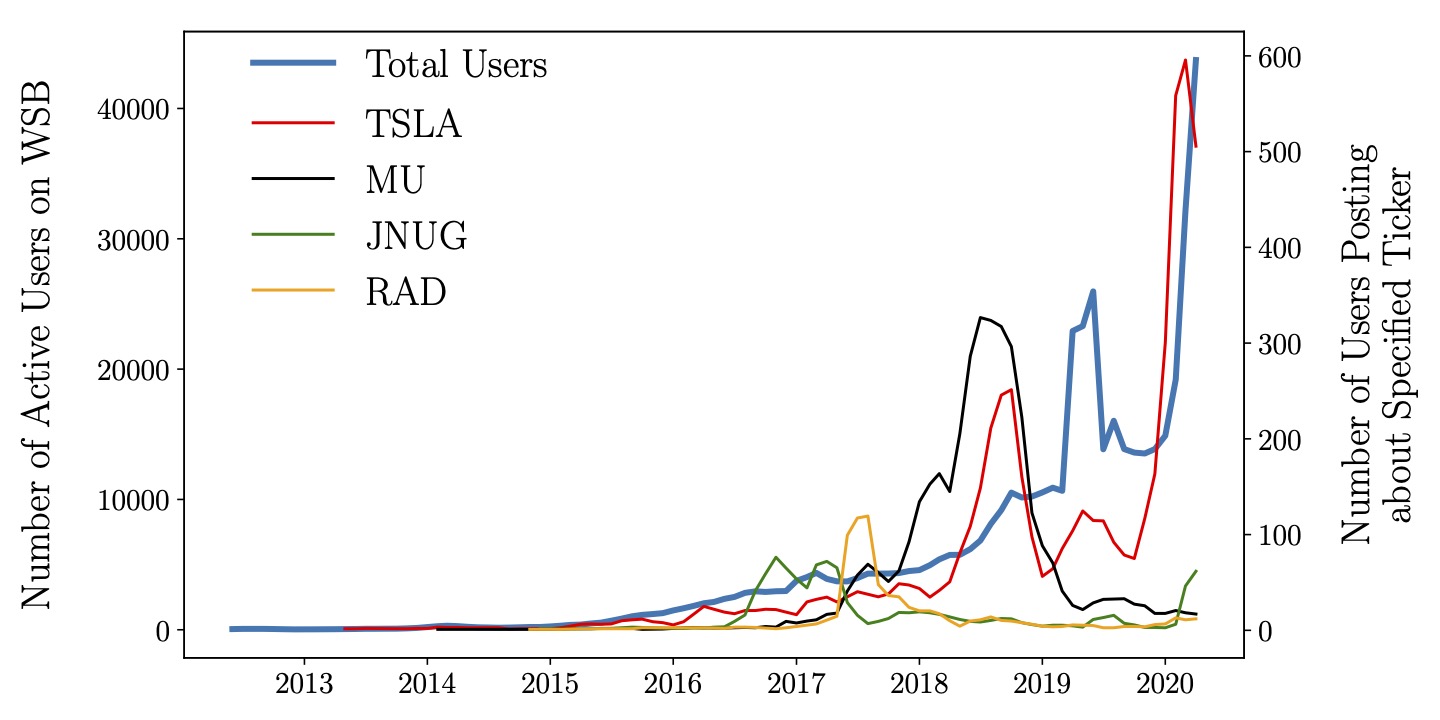 Source: Semenova and Wikler, 2021. Notes: the number of unique monthly active users on WSB (users who comment or post) on the left y-axis plotted against the unique number of posters about a specific ticker (on the right y-axis). Both are plotted as 3-month rolling means.

We test for ‘contagion’ in two different ways. First, we observe that past user activity is statistically significant for predicting future activity. Next, we attempt to identify the contagion mechanism: how interest spreads from one investor to the next. Our paper finds that users who comment on discussions about an asset are between four and nine times more likely to subsequently start a new conversation about the asset themselves, compared to a control group.

Users also adopt the directional position of their peers, such that they reach a `consensus.’ They buy(sell) a stock because other users also buy(sell) the stock. This effect is especially large in bouts of selling, pointing to interesting psychological models of investor panic during a downturn.

What does this mean for the markets overall? Potentially, the fast spread of news from one investor to another may lead to more efficient markets: information will be absorbed quickly, and assets will converge to their `true value.’

Contagion and consensus are two key components for social herding. We develop a theoretical model to better understand the implication of such behaviours among investors. Our model predicts an initial price increase, from the asset’s growing popularity, followed by a volatile crash. This is driven by the endogenous dynamics: given that individuals rely on the opinions of others, buy and sell decisions propagate and feed off of each other, amplifying price swings.

We validate the existence of a causal link between WallStreetBets activity and the stock market through a two-stage-least-squares approach. In brief, we are interested in retail activity explained by contagion, instead of idiosyncratic news. We predict new users discussing an asset on WSB using historical WSB and market data. These are our observed ‘hype’ investors.

The predicted number of new authors, plus the lag in average sentiment, are fitted to data on price returns, volatility, and dollar trading volumes. Our key finding is that variance in these hype investors performs particularly well in explaining asset trading volumes. Figure 2 displays this result for two heavily discussed stocks, namely Advanced Micro Devices (AMD) and Micron Technology (MU).

Hype investors come in cycles: interest, built up over several weeks, eventually fades out. Their activity is correlated to negative asset returns and higher volatility, but these results are not as robust.

Source: Semenova and Winkler, 2021. Notes: the predicted number of new users interested in a ticker, for a given week, correlates strongly with observed weekly trading volumes for AMD (Advanced Micro Devices) and MU (Micron Technology). Both series are plotted as four week rolling moving averages.

With a publicly acclaimed victory of retail investors over Wall Street, it is unlikely that this new `modus operandi’ will simply disappear. In fact, evidence suggests the opposite: the WallStreetBets forum exploded in size and currently has 10 million self-described “degenerates”. Putting these numbers into perspective, The Times newspaper recently boasted 7.5M subscriptions. It is important for researchers and policymakers to get ahead of this curve. A delay to a critical assessment of retail investor herding threatens to further destabilise markets.