Most states, cities and local authorities in the US are concerned with promoting and maintaining a favorable “business climate” in order to attract inward investment, jobs and other economic benefits. Using General Electric’s “Better Business Climate” program as a case study, Caroline Hanley finds that the concept was mobilized by a grassroots conservative political movement in the 1950s as a way of undermining the power of labor unions. The business climate concept, she writes, has since become a way for businesses to define their own interests as shared community interests.

Employment insecurity has emerged as a defining trait of the contemporary American economy, and it’s not just workers who fear job loss. Employment insecurity manifests at the community level as well. Shared concerns over an area’s ‘business climate’ and its relationship to employment growth inform virtually every area of local politics in the United States, often through the work of public economic development agencies operating in partnership with the private sector. Maintaining a favorable business climate to encourage job growth means limiting regulation, offering enticing tax breaks or publicly funded business infrastructure to potential employers, and promising a skilled and eager workforce (preferably one that is not unionized).

Large companies with the ability to relocate or grow their operations elsewhere exercise a great deal of power over their workers and the communities in which they do business.

The ideas and history behind local competition for investment

While nothing I have said so far will come as a surprise to most readers, the origins of this story are not well known. Capital mobility and the regulatory “race to the bottom” dynamics it encourages are often thought of as unfortunate but unavoidable products of globalization. But local competition for investment has deep historical roots, and as the economic geographer, David Harvey wrote in 2001, ‘the production, reproduction and reconfiguration of space have always been central to understanding the political economy of capitalism’.

What varies over time are the institutions and ideas supporting capital mobility. And ideas can be powerful. As Margaret R. Somers and Fred Block observed in 2005, examining ‘the ideas, public narratives, and explanatory systems by which states, societies, and political cultures construct, transform, explain, and normalize market processes’ is critical for understanding economic organization and social change (p. 264).

As a cultural frame that signals objectivity and the naturalness of political economic location advantages, the concept of business climate advances the interests of capital in undermining organized labor by obscuring the class bias in this logic of market organization. In addition, the institutionalization of the concept in state and local politics—seen in the growth of public economic development offices working in partnerships with private groups like the US Chamber of Commerce—entrenches managerial interests as shared community interests.

The contemporary politics of the local business climate did not arise by accident. The concept was mobilized by a grassroots conservative political movement in the 1950s as an end run around the employment protections of the New Deal. The General Electric Company (GE) led the way in developing a national public relations campaign that framed support for unions as a threat to economic security and emphasized local responsibility for maintaining a favorable business climate.

GE’s “Better Business Climate” (BBC) program sought to mobilize local political action in favor of the Company’s regulatory goals through the use of newsletters with titles such as ‘The Community’s Problem in Getting and Keeping Good Employers” (ER News, 6/3/55); incentivizing GE managers to address local civic and political groups with a pro-business climate (anti-union) message; and distributing business climate appraisal guides to communities across the country including potential GE plant sites. These “economic education” materials taught that unions (and pro-union elected officials) are detrimental for local economic health and prosperity, and that it is incumbent on the community itself to maintain a favorable business climate to attract investment and create jobs.

BBC program materials sought to obscure the alignment between business interests and pursuing a favorable business climate. Copies of GE’s newsletters were widely distributed outside the Company in response to written requests from community members and through the networks of the Chamber of Commerce. A widely circulated issue, titled “Political Helplessness of Business Hurts Everybody” argued that businessmen must become more involved in politics, but this imperative is framed as separate from partisan or party politics:

Non-partisan political work—which is not “political” in the old or usual sense—is really economic and other educational work of a truly informative or “better business climate” type. (ER News 5/28/56; emphasis in original)

A key feature of the BBC Program is the way the business climate surveys and managerial outreach were intended to work together. Correspondence between GE executives dated November 1956 states:

I think any of us who are making public addresses should be sure it is made clear that others are questioning the climate in a given state… I think we should use the technique I employed in California to infer [sic] that it was the local residents who are examining or being critical of the local business climate, and that we are there simply to tell what people elsewhere are doing who are trying to correct deficiencies they have found in their business climate.

The campaign yielded tangible effects on labor’s power at General Electric. Even at the height of the postwar accord between capital and labor, the power of GE’s electrical workers was relatively weak due to inter-union conflict and a ‘take-it-or-leave-it’ approach to bargaining that was declared illegal in 1969 after nearly a decade of deliberation and appeals by the National Labor Relations Board. GE management deftly used the threat and reality of business relocation as a tool to discipline labor throughout its company history. But the use of the business climate concept as a discursive strategy for framing capital mobility was effectively employed to advance employment restructuring by mobilizing the community against labor in the union stronghold of Schenectady. 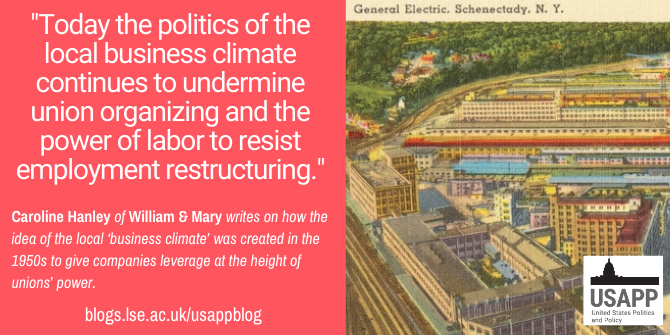 Amid GE’s massive postwar expansion, managers deployed the business climate concept to frame job losses in Schenectady as requiring greater union cooperation. New local economic development organizations dedicated to promoting the local business climate pressured International Union of Electrical Workers (IUE) Local 301 in Schenectady to break with its national union at two critical moments in a campaign to increase employment security. GE’s business climate program reshaped the politics of employment security in Schenectady and contributed to an institutionalization of insecurity. In the words of one former Local 301 worker who resisted the national IUE’s calls to strike over GE’s 1964 contract violations and instead voted to accept the company’s restructuring plan, “we were told to either vote to accept or the co. would move out of town and we would lose our jobs. What else could we have done”?

How businesses define their own interests as shared community interests

The use of business relocation as a tool to restructure employment relations became a cornerstone of corporate strategy following the economic crisis of the 1970s. Today the politics of the local business climate continues to undermine union organizing and the power of labor to resist employment restructuring. This historical case study of GE’s BBC program calls attention to how the business climate concept, as a cultural frame for understanding capital mobility, advances the symbolic power of businesses to define their interests as shared community interests. The concept obscures class politics, organizes powerful public-private partnerships in favor of business interests, and signals the naturalness or inevitability of what are actually political economic outcomes.

In this time of heightened inequality and widespread economic vulnerability, perhaps it is time to reexamine how the idea of the local business climate concept—as a taken-for-granted, habitual, and legitimated source of inequality, continues to operate as an instrument of employment insecurity.

Caroline Hanley – William & Mary
Caroline Hanley is an Associate Professor of Sociology at William & Mary. Professor Hanley’s research investigates how earnings are shaped by local contexts– regional, political economic, organizational and workplace– using statistical and archival methods. She is particularly interested in the causes of rising earnings inequality in the United States since the 1970s, the influence of race and gender on earnings, and how popular conceptions of fairness in economic activity shape the distribution of economic rewards.