The United States puts more people in prison than any other country in the world, and Black and Latinx individuals are disproportionately incarcerated and for longer. In new research which examines over 500,000 people admitted to state prisons through county courts, Katherine A. Durante finds that Black and Latinx individuals are sentenced, on average, for longer than White individuals, and that Black individuals are sentenced more harshly as the percentage of voters for Donald Trump in a county increases. These findings, she writes, raise questions of bias and unequal justice in the US justice system.

Black and Latinx individuals, respectively, are incarcerated in state prisons at 5.1x and 1.4x the rate of White individuals in the United States. One driver of disparity is that they are often sentenced longer than their White counterparts. However, this is not true in all jurisdictions across the US; some county courts are especially prone to racial and ethnic disparities in punishment. For example, courts located in counties with larger shares of Republican voters sentence Black individuals longer than White individuals convicted of similar crimes.

The US is large and diverse and varies considerably across regions by geography, state law, politics, racial and ethnic demographics and composition, educational levels, employment opportunities, and income. Most sentencing decisions are made in county courts that operate autonomously from one another. Thus, sentencing outcomes should reflect the local climate, especially since local judges and prosecutors are elected officials and have the incentive to appease their constituents. For example, courts in smaller, primarily White, more conservative counties often sentence relatively more people to prison and for longer periods, compared to larger, urban, racially and ethnically diverse, more liberal counties.

Case Characteristics and Individual Factors are Associated with Longer Sentences

Alarmingly, however, race, ethnicity, and gender are also each a key determinant of sentence length, even when accounting for case characteristics and prior convictions, as Figure 1 shows. 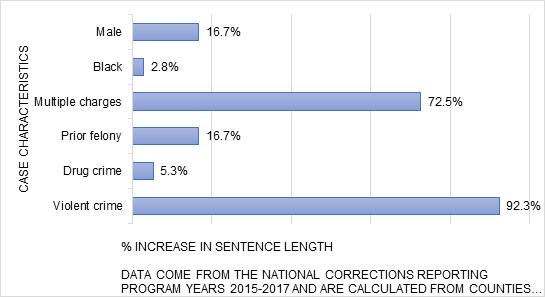 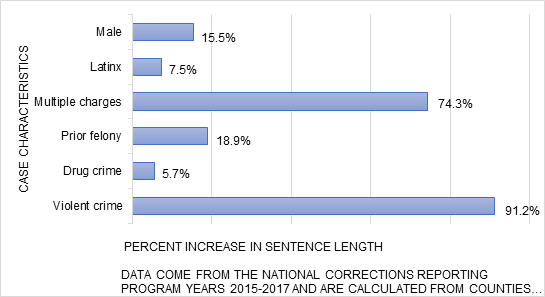 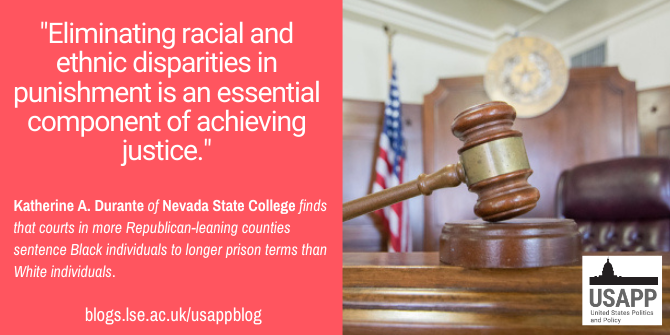 White Americans are more likely to vote for Republican politicians, compared to members of other racial and ethnic groups. Republican voters are more likely than Democratic voters to view crime as an individual failing or choice, instead of as a result of complex structural factors that disadvantage people of color and low-income individuals, and to believe that Black Americans are overrepresented in US prisons because of their choice to engage in crime.

Further, Black people, especially Black men, suffer from stereotypes of being “dangerous” and prone to “criminality” within US culture. These stereotypes, paired with a conservative political climate that values “tough-on-crime” policies and practices, can create an environment where Black individuals are sentenced more harshly than others. My analysis finds that as the percentage of people who voted for Trump voters in 2016 in a county increases, the sentence lengths for Black individuals sentenced to prison increases. Therefore, Black individuals sentenced to prison are increasingly disadvantaged in counties with larger numbers of Republican voters.

Individual case characteristics and prior convictions are the primary determinants of sentence length for people convicted of crimes and sentenced to prison in the US. Still, race and ethnicity continue to be important predictors of how harshly courts sentence people (see Figures 1 and 2). This raises questions of bias and unequal justice and hurts American society and the reputation of the justice system, and especially penalizes Black and Latinx families and communities.

The US is a diverse nation, and courts are situated in communities that can vary dramatically in terms of racial, ethnic, and political make-up, as well as socioeconomic and cultural features. Still, disparate treatment across race/ethnic groups is rampant in the justice system. Understanding the local context that courts are situated in can assist policymakers who seek to identify drivers of disparity and eliminate disparate treatment under the law.

Eliminating racial and ethnic disparities in punishment is an essential component of achieving justice. Differential treatment by those in the justice system must be addressed to eliminate disparities.

Katherine A. Durante – Nevada State College
Katherine A. Durante is an Assistant Professor in the Department of History, Law, and Society at Nevada State College, where she teaches in the Criminal Justice and Social Justice programs. She holds a Ph.D. in Sociology from the University of Cincinnati. Her research examines racial and ethnic disparities in sentencing and the harmful impacts of incarceration on families and has been recently published in Criminal Justice Policy Review, Race and Justice, and the International Journal of Offender Therapy and Comparative Criminology, amongst other outlets. She tweets @KatieD_PhD