The growth in the film industry outside Hollywood raises questions about its impact on local communities. Using Atlanta Georgia, as a case study, Velma Zahirovic-Herbert examines how the opening of film production studios influences surrounding house values. She finds that studios tend to be located in lower-priced neighborhoods and are linked to increases in surrounding house prices following their opening.

“So you want to be in the movies?” It seems political leaders and their constituents across the US do. The breakdown of the studio system and technological improvements means film production is no longer tied to Hollywood. Footloose film production companies have followed government incentives across the country, with several settling in Atlanta, Georgia, now sometimes called the Hollywood of the South. In recent years Georgia has become home to one of the biggest film industries in the US, ranking third in production levels amongst the states.

Production companies need qualified workers, suppliers, and a place to film. Perhaps with that in mind, in 2005 the Georgia state government passed the Entertainment Industry Investment Act which provides tax credits to film production companies operating in the state. In response, the number of studios in Atlanta has boomed since the incentives came into force. While the big-name Tyler Perry Studios employs hundreds of workers on its 330-acre lot, other smaller operations like Eagle Rock Studios may have only a few dozen permanent employees. However, both influence the surrounding community by constructing large buildings to house sound stages and generating traffic. Operations provide employment but also create pollution.

The effect of film studios on nearby house prices

The project-based nature of the film industry and the wide range of craftspeople required to produce a film means many workers want to live close to potential projects. Even people who do not work in the industry may want to live nearby to rub elbows with the stars or those who work with the stars. Proximity comes with the good and the bad, so it could drive house prices up or down.

Much has been written about the rise of cultural clusters within cities and the formation of creative and art enclaves that attract others for the “buzz.” As a result, we have seen rising house prices in Montreal and Philadelphia. However, the evidence is less clear for the film industry in which workers in Istanbul live near the studios whereas workers in London do not.

My research with Karen M. Gibler shows that the film industry boosts the Atlanta area housing market. Production studios tend to be located near lower-value residential neighborhoods like many industrial producers. But we find that opening a film production studio leads to an average 4 percent increase in housing prices within one mile of the site. We determined the effect by comparing house prices before and after 15 film production studios opened in the Atlanta metro between 2010 and 2018 while controlling for other factors that may have led to the price changes, such as neighborhood housing vacancy trends. 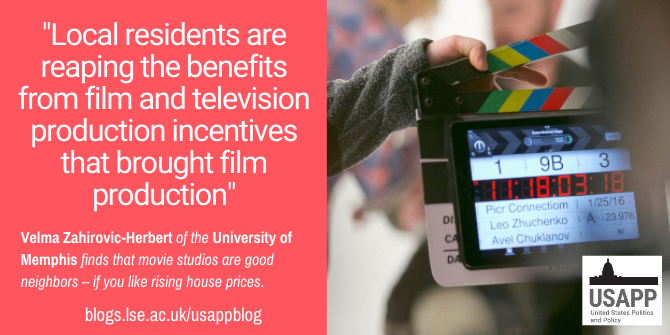 Photo by Avel Chuklanov on Unsplash

We also find that larger studios exert an even greater positive influence on surrounding house prices. This may result from the larger physical presence, name recognition, the cachet of being associated with a major studio, or greater awareness of the studio due to broader media coverage. Media outlets cover many events hosted by studios. Numerous local and national sources talked about Hollywood stars who attended the grand opening of Tyler Perry Studios in Atlanta.

Although we could not research trends beyond a couple of years after the studio was built because of the relatively recent boom in the industry, it is possible prices will continue to increase. In addition, some of the studios are getting involved with developments well beyond their studios’ boundaries, creating virtual “movie cities” and placing their stamp on the larger community. Trilith studios (formerly Pinewood Atlanta) plans to add nearly 2 million square feet of studio space while building more than 1,300 housing units, hotels, and offices, over the next several years. And new school to train future filmmakers, the Georgia Film Academy, plans to teach classes there.

Thus, it appears that the benefits of work convenience and the desire to live as part of a cultural cluster matter more to homebuyers than any increase in traffic and congestion, noise and light pollution, or other negative effects that film studios might create. This is definitely true in the Atlanta area, where local residents are reaping the benefits from film and television production incentives that brought film production. The incentives have ushered in a wave of film and TV projects, boosting the housing market and even changing construction project timelines. Big-budget productions have drawn the big stars. And if you see A Madea Homecoming, Black Panther: Wakanda Forever, or Dear Evan Hansen in a movie theater soon, you will know where some of the actors and crew live.

Velma Zahirovic-Herbert – University of Memphis
Velma Zahirovic-Herbert is the Martha and Robert Fogelman Family Chair in Sustainable Real Estate and Professor of Real Estate at the University of Memphis. Her current research focuses on housing markets, neighborhood change and growth, and the applications of consumer behavior theories to real estate brokerage. She has published extensively in both real estate and urban economics journals on these and similar topics. She is an active member of the American Real Estate Society, where she co-chairs the ARES women’s caucus group, C-WI(RE)2 Connecting Women in Real Estate Research & Education.