In The Son King: Reform and Repression in Saudi Arabia, Madawi Al-Rasheed provides a new account of Saudi Arabia’s recent history, focusing on the duality of reform and repression that has characterised the era of the Crown Prince of Saudi Arabia, Muhammed bin Salman. This book is an essential resource for those looking to understand the transformations and contradictions of Saudi Arabia under the Son King, writes Betul Dogan Akkas.

In The Son King, Madawi Al-Rasheed reflects on the transformations in Saudi Arabia, providing the reader with an account of Saudi Arabia’s recent history, focusing on reform and change. In her seminal study, Al-Rasheed elaborates on the historic and contemporary milestones in the Kingdom’s politics over seven chapters. Although the book’s full title is The Son King: Reform and Repression in Saudi Arabia, its scope is broader than the titular Crown Prince of Saudi Arabia, Muhammed bin Salman (hereafter MBS).

Al-Rasheed begins with journalist Jamal Khashoggi’s tragic murder, which has become a shared starting point in the latest books on Saudi Arabia. The introduction provides a comprehensive literature review of the new era’s branding and policies, including the duality of reform and repression under MBS’s rule. In today’s Saudi Arabia, these reforms are heavily discussed in the media and academic studies; however, as Al-Rasheed states, there is still much to talk about regarding a digital and social wave of repression.

The introduction gives readers a clue that digital propaganda and the new Saudi diaspora have emerged in the last decade due to policy changes, notably intensified after the Arab uprisings. As Al-Rasheed states, the book ‘delves into new social and political outcomes beyond the scope of radical religion, oil and the current progressive leadership’ (2), guiding us through the potential challenges to the future of the country. In the introduction, Al-Rasheed also shares her own story of exile. This personal anecdote and the short story about how her research interests have evolved were nice additions and insightful for readers.

Al-Rasheed’s introduction defines the primary assumptions of the book. To start with, she emphasises that Saudi society is still struggling to define its national identity. While the state lacks a unified social and political identity, MBS promotes himself through new, modern imagery and policies to generate loyalty to himself, rather than to the nation. Al-Rasheed also discusses stories of the Saudi diaspora, including Khashoggi’s murder in the Saudi consulate in Istanbul, and avers that ‘the violence of the new regime became global too’ (9).

Al-Rasheed also depicts the power vacuum that has emerged in the years after the deaths of several senior princes in the 2000s and the subsequent transformations that Saudi Arabia has gone through. Another critical argument of the book is to define the change in Saudi Arabia beyond being a natural process of installing a new monarch. Al-Rasheed scrutinises ‘the contradiction between repression and reform that has become a central prism’, delving into the duality of reformist and oppressive monarchical rule.

The first chapter summarises the history of previous Saudi states and how the current Saudi Arabian rule has been authorised. This section is particularly significant for readers who are not familiar with Saudi history because it outlines the establishment of Saudi Arabia through old and new strategies, the role of local actors and the challenges to the state.

Chapter Two starts with a detailed analysis of the Son King’s branding and network of alliances, mainly through media and PR companies. Al-Rasheed depicts ‘the media’s optimistic and overtly congratulatory assessment of the emerging realm’ (31). How the regime deployed a new royal vision through a persuasive and aggressive publicity campaign is at the centre of this chapter. Al-Rasheed states that the analysis published in the media and academic outlets proposes that progressive leadership is the only way to solve the ills of Saudi society. However, proposing this leadership as the solution ignores the views and experiences of locals, the Saudi voices that have struggled for years to demand reform. Later she adds that while the media and these contested analyses define MBS as the leader of reform, he ‘has appreciated the work and struggles of feminists and vocal activists, while holding them in detention and claiming to be the source himself of these initiatives and progress’ (85).

Chapter Three introduces MBS in detail, delving into how he consolidated his cult of personality and how his policies combine reform and repression. Significantly, the murder of Khashoggi is one of the foci in this chapter. According to The Son King, Khashoggi’s evolution from being a man of the Palace to a dissident in exile, persona non grata, represents the duality of reform and repression in the era of MBS. Khashoggi was a supporter of change in the time of King Abdullah, and he was defending the regime abroad: Al-Rasheed states that for many, he was initially seen as an ‘apologist’ (108). In the era of so-called reforms, he was expected to be among those impressed by them, but rather he was critical of the nation’s current politics. She adds that ‘observers who may think that the murder of Khashoggi represents an unusual turn in the history of Saudi repression are probably unaware of precedents to this heinous crime’ (122).

Al-Rasheed argues that ‘Saudi Arabia moved from religious nationalism and pan-Islamism to populist nationalism to mobilize the loyalty of citizens to the future Son King’ (138). Chapter Four primarily discusses this new wave of populist nationalism deployed by MBS. However, Al-Rasheed argues that Saudi Arabia is far from being a melting pot for its multicultural and multi-sectarian society. Instead, the Kingdom is still a state run by Al Saud, not a nation.

After surveying religious nationalism in the early formation of the state and pan-Islamism in the later era, Al-Rasheed introduces the new nationalism along with its contradictory narratives. MBS’s propaganda about ‘Saudi moderation’ proposes the myth that it was the Iranian revolution and the siege of the Mecca Mosque in 1979 that encouraged radicalism in Saudi Arabia. Al-Rasheed does not discuss the accuracy of this claim; however, she underlines that these interpretations of the reasons for radicalism in Saudi Arabia absolve political elites and the wider society of any responsibility due to the belief that if there was no trigger in the region like Iran, Saudi Arabia would be ‘an island of tolerance’.

Considering counter-narratives to this new nationalism, Al-Rasheed provides examples of activists and exiles who reject this, stating that it does not represent them but rather Al Saud. One of the critical advantages and outstanding elements of The Son King is the use of primary data gathered from interviews. Notably, in this chapter and later chapters, where Al-Rasheed interviews women, young people, exiles and ‘sub-nationals’ (or minority groups) to learn their approach to reform and repression in the Kingdom, these insider comments give readers comprehensive insight.

Similar to Chapter Four’s approach to the new nationalism, Chapter Five discusses the minorities and sub-nationals in the Kingdom, starting with a conceptual and historical analysis. The chapter provides a comprehensive account of tribalism, the competition between tribes, religious minorities, mainly Shia, and their problems with the regime.

Chapter Six illustrates the struggles of Saudi women, including case study examples from well-known figures in the Kingdom and elements of patriarchal domination such as guardianship. Al-Rasheed starts with young people’s contradictory political stances towards the regime, discussing millennial ‘runaway girls’ who have sought political asylum outside Saudi Arabia, and later providing similar examples from young Saudi men in Chapter Seven.

Chapter Seven highlights the regime’s effort to manage restless youth and the new generation’s demands. In particular, digital technologies and the Kingdom’s use of these for further repression and investigation are elaborated in detail. As the book indicates, there is more than one component in Saudi society that opposes the current policies. However, the regime is aware that this opposition is not unified, and there needs to be more than one strategy to tackle these multidimensional threats. Thus, the current duality of reform and repression has various elements that can work to deal with the problems posed by sub-nationals, the Shia population, women, young people, tribes and exiles.

Al-Rasheed’s elaboration of change and transformation in Saudi society, focusing on the duality of reform and repression in the era of the Son King, provides a well-structured discussion of Saudi political history and concepts embedded in it, such as populist nationalism and the hyper-nationalist agenda. The book gives details of the network which rules and manages the Kingdom through well denoted discourses and narratives. As Al-Rasheed states, ‘Saudi society found refuge in social media’ (14), and The Son King proposes reasons for and the outcomes of each type of exile that different Saudi Arabian citizens experience. For students and scholars of Gulf Studies, Al-Rasheed’s book is an essential resource. 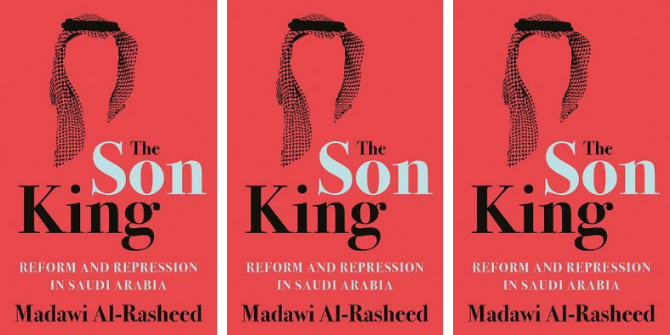